Expanded unemployment-insurance benefits have given concrete support to U.S. personal incomes during the pandemic, according to new figures published Friday that will fuel the debate over whether to extend them when they expire next month.

Compensation of employees, a measure which includes wage and salary disbursements as well as employer benefits, fell in the three months through May, according to monthly Commerce Department figures on personal income and spending. But compensation of employees, plus government unemployment-insurance benefits, rose 2.3% over the same period, thanks to a surge in payouts last month. 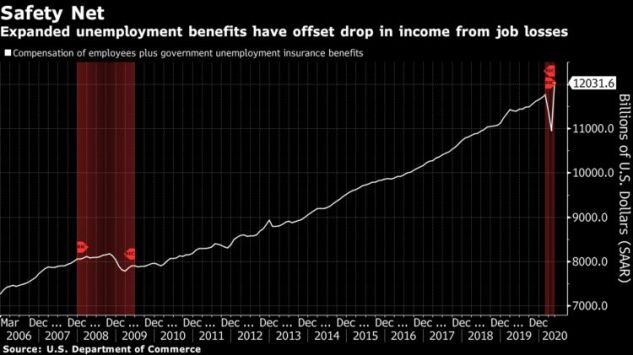 The data indicate the expansion of unemployment insurance in the relief measures passed by Congress in March, which augmented weekly payments by $600, has been successful in stabilizing household incomes on average. Lawmakers are currently debating whether to extend the duration of the expanded Federal Pandemic Unemployment Compensation payments, which are set to expire at the end of July.

“Government stimulus measures are providing a big boost to income,” said , senior U.S. economist at Deutsche Bank AG. If that boost is removed when the supplemental benefits expire, “it will have an impact on consumer spending in the back half of the year,” he said.

To contact the reporter on this story:
in New York at mboesler1@bloomberg.net