The facade of the U.S. Treasury Department in Washington, D.C., is pictured.
NICHOLAS KAMM/AFP/Getty Images

Eleven multiemployer pension plans find themselves in limbo as they wait for the U.S. Department of Treasury to approve or deny their requests for benefit cuts.

If all 11 cut requests are approved, about 27,000 active workers and retirees could see a dip in their benefits. In some cases, applications show members could see their pensions cut in half. Under the Multiemployer Pension Reform Act of 2014, multiemployer plan officials can request Treasury’s approval to cut benefits if they show that doing so would avoid insolvency. The Treasury, then, must work with the Pension Benefit Guaranty Corporation and the U.S. Department of Labor to prove the cuts are needed to keep the funds in the black. 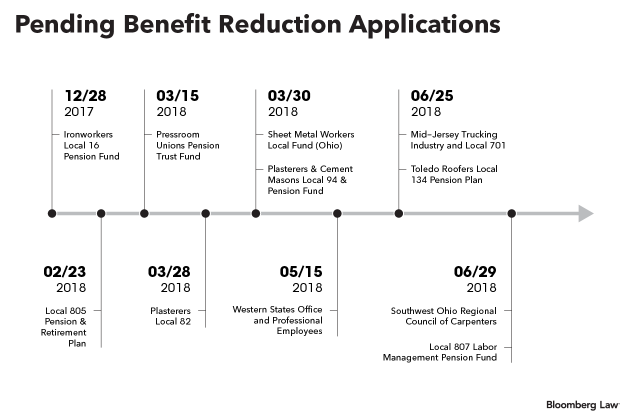 All of the pending reduction requests indicate that without approval, their plans will become insolvent in an average of 13 years. The earliest insolvency threat is to the Local 805 Pension & Retirement Plan, a Teamsters fund, which could be insolvent by 2024.

A Treasury Department approval isn’t the final decision, however. The plan participants must vote on the cuts following the Treasury’s consent.

The Treasury has approved only five requests for benefits cuts since 2016, including one this year. It has taken an average of roughly six months for an approval notice.

These applications are approved or denied by the Treasury in consultation with the PBGC and the Labor Department.

The PBGC is a federal pension insurer. If a plan becomes insolvent, it’s responsible for paying members’ benefits. The insurer, however, is slated to run out of money by 2025.

Plans like the Southwest Ohio Regional Council of Carpenters Pension Plan have had to change their initial requests because they didn’t meet the standards set by the MPRA. The Carpenters plan managers submitted a second application after withdrawing their first in October 2017, proposing to recalculate and decrease all of its member benefits by 8 percent. The cuts are slated for March 2019, if approved.

This plan has 5,501 participants, according to its latest Form 5500 filing with the Labor Department in 2016. The fund’s officials say it will become insolvent by 2036 if cuts aren’t made.

The Western States Office and Professional Employees Pension Fund is hoping the third time is the charm, after withdrawing twice in 2017. This plan proposed a 30 percent cut to benefits for all participants under age 80, claiming it also will become insolvent by 2036 without a reduction.

The Western States is made up of 7,463 members, according to its latest filing in 2016 with the Labor Department.

The next step after the Treasury’s stamp of approval would be for all of the pension participants, both retired and active, to vote on benefit reductions.

Having more no than yes votes, however, doesn’t mean the request won’t go into effect, according to John Murphy, Teamsters international vice president.

“It’s a joke because if the plans’ failure would cause a $1 billion liability to the PBGC, the Treasury can ignore the vote,” Murphy told Bloomberg Law. Benefit cuts won’t be restored because pension plans are losing employees and there are more retirees than active workers, according to Murphy.

This happened to the New York State Teamsters Pension Fund in 2017, when 9,788 participants voted against benefit cuts and 4,081 voted for them, out of 34,755 who received a ballot. Unreturned ballots were considered yes votes. Treasury, however, has not used its power to overturn a participant vote. In the case of the New York Teamsters fund—the largest fund to date to have its MPRA application approved—more than 50 percent of the participants approved the benefit reductions.

Murphy said, however, the reductions still went into effect because it would’ve cost the PBGC more than $1 billion in liability. Members of that fund recently filed a lawsuit against Treasury, contending that the benefit cuts violated the U.S. Constitution.

Teamsters workers and retirees are represented by at least four of the 11 funds—including the Southwest Ohio Regional Council of Carpenters Pension Plan, The Mid-Jersey Trucking Industry and Local No. 701 Pension, and the Toledo Roofers Local No. 134 Pension Plan.