Sen. has a reputation for bipartisanship, and her collaboration across the aisle with Sen. on a paid family leave proposal is no exception.

The lawmakers’ child tax credit proposal reflects their shared legislative philosophy that simple, targeted bills are a better strategy than larger, complicated cure-all laws. It also speaks to demographics Cassidy (R-La.) and Sinema (D-Ariz.) represent: constituents who largely oppose new taxes, and are comprised of many low- and middle-income workers and small businesses.

In a gridlocked Congress, this kind of teamwork would be the obvious answer to solve the paid family leave quandary: A nation without federal family paid leave, a patchwork of state and local leave laws, and lawmakers from both parties looking for a solution. But Democrats are looking for a broader plan that encompasses paid time off for family care, and Republicans don’t want to burden employers.

Although they haven’t formally introduced their plan, Cassidy and Sinema have set out to create one that would be voluntary and wouldn’t add new taxes.

“I don’t think either party is monolithic,” Cassidy said of their collaboration, adding that he hopes the bill will move later this year. Each party wants to get some kind of coverage for working families, he said in an interview.

Their proposal only focuses on parents of newborns or newly adopted children, the demographic with the most pressing need for paid leave, Cassidy said.

“If we start addressing that, we can accomplish a lot of what we want to accomplish. If somebody wants to add to that later we can add to that. If that’s where you want to go. Don’t let the perfect be the enemy of the good, of the most pressing, of the most common,” he said.

But the plan they’ve put forward already has alienated Democrats and advocates for paid leave who say it doesn’t guarantee leave to new parents, only providing cash for child care. The plan relies on unpaid leave provided by the Family and Medical Leave Act for workers at businesses with at least 50 employees. Leave after a child is born is an important component to family health, bonding, and job security.

“I think there’s a big question on how adequate it is,” said Elisabeth Jacobs, senior fellow on issues related to family economic security at the Urban Institute, a Washington-based policy think tank. “This works if we are debating how to make the child tax credit better for families, it doesn’t work in the debate over how do we address paid family and medical leave.” 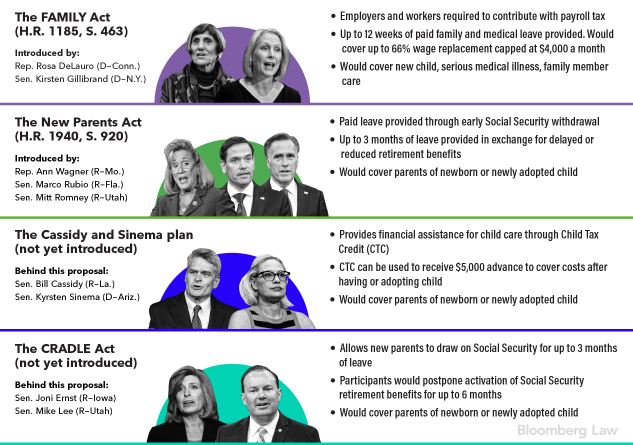 The Sinema-Cassidy plan is one among four that have been introduced or soon will be rolled out. Each differs on who can access leave and how best to finance a plan; some senators said there could be room for negotiations for one proposal if their core priorities are included.

Cassidy and Sinema’s main competition for Democrats’ support is the FAMILY Act (H.R.1185 , S. 463), which creates a federal paid family and medical leave social insurance program funded through a payroll tax, modeled on existing paid family leave programs in eight states and the District of Columbia.

Democrats, like Sens. (N.H.) and (Ohio), seem less inclined to support a proposal that doesn’t include several tenets of the FAMILY Act, from Rep. (D-Conn.) and Sen. (D-N.Y.).

“It’s good that we’re all talking about it, but I think we need to push for what I view is the gold standard,” DeLauro said of her bill.

The FAMILY Act is the only proposal to receive a congressional hearing this year, but it hasn’t yet been marked up.

Republican proposals include the New Parents Act of 2019 (S. 920), sponsored by Sens. (R-Fla.) and (R-Utah), and the CRADLE Act, backed by Sens. (R-Iowa) and (R-Utah). Both plans give new parents paid leave through early access to Social Security benefits in exchange for delayed or reduced retirement benefits.

That could be due to White House involvement. President and his daughter and senior adviser Ivanka Trump have called on Congress to pass a federal paid family leave bill, but have resisted endorsing any one proposal. Ivanka Trump has met with at least 60 lawmakers over this issue, according to the White House.

Ivanka Trump has tweeted on at least three occasions this year in support of Cassidy and Sinema’s effort, lauding the fact that their framework is bipartisan. A Senate Finance Committee bipartisan working group also is considering paid leave measures.

Rubio told Bloomberg Law he’s looking for a policy “that can pass” and one that doesn’t burden the private sector with financing responsibility.

Romney’s priority is “family flexibility so new parents can arrange their work/life balance in a way that reflects their financial capacity,” which can be achieved through the New Parents Act, said Arielle Mueller, a spokeswoman for the senator.

Cassidy and Sinema designed their plan with their respective states’ demographics in mind.

“Her sponsorship of this bill is born out of the rapid population growth that Arizona is experiencing,” said , a political consultant and government relations practitioner at First Strategic in Phoenix. “Any help and assistance in terms of those first three months after childbirth will be very welcomed by most everyone.”

The plan provides new parents with a $5,000 advance on their child tax credit at the birth or adoption of a child, to be offset over the following decade in reduced credits. If a family doesn’t qualify for a refundable portion of the child tax credit, they can still draw down a three-month full replacement of his or her salary, and that will be deducted from the child tax credit they receive for the next 15 years.

Those aims align with the Sinema’s longtime legislative philosophy. “I am most successful when I choose proposals to work on that are manageable and are not particularly complex. The more complex and difficult a proposal gets, the easier it is for individuals to say no,” Sinema said at a recent event hosted by the American Enterprise Institute, a policy think tank in D.C. that has published research on paid leave. “That’s certainly been my M.O. over the last 16 years, is to find chunks that we can be successful with, and then after achieving that success, building on it to find the next layer or the next step of success.”