A customer reaches for cannabis cookies at MedMen, a Los Angeles area shop selling marijuana for recreational use, in this 2018 photo.
Photographer: David McNew/Getty Images

The cash that Reno cannabis businesses bring to City Hall to pay their taxes weighs more than some of the employees in charge of collecting it.

The city schedules a special tax day for four dispensaries to pay tens of thousands of dollars each quarter. It’s a “Hollywood movie amount of money,” if not exactly in uniform denominations wrapped in crisp bundles as you’d see in a film, said Dylan Shaver, director of Reno’s Office of Policy and Strategy. Staff have to count wads of cash in a guarded room while the taxpayer waits. An armored truck takes it for deposit.

Banks have been reluctant to touch cannabis businesses because the substance is still illegal under federal law. That’s quickly morphing into a huge monetary problem as 11 states have legalized the sale of recreational marijuana and nearly two dozen more allow only medical marijuana.

States with marijuana dispensaries flush with cash are exploring banking workarounds using credit unions, digital currencies, and payment apps. Nevada, for one, aims to retool the idea of a casino chip to let cannabis companies pay their taxes and other bills.

State officials say they’re stepping in to address public safety and compliance issues that the cash creates in the absence of federal action. Recreational excise and sales tax revenue could reach $1.6 billion this year, according to an analysis by the Institute on Taxation and Economic Policy on seven states where taxable sales have started.

“As retail gets bigger, the problem only gets harder,” Shaver said. 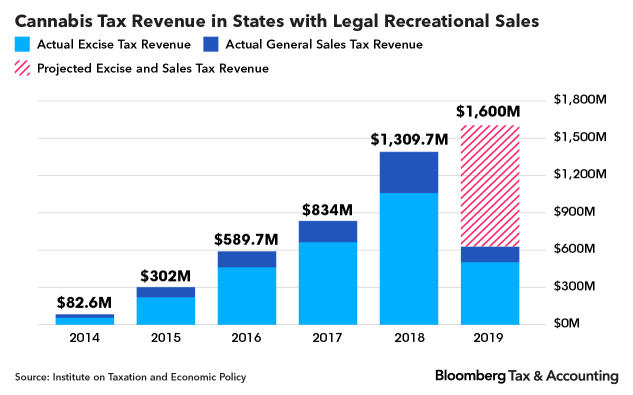 Nevada is developing a digital currency system to offer “a much cleaner way” to pay taxes on cannabis sales while addressing the risks of cash, State Treasurer Zach Conine said.

Conine’s office will develop a three-year pilot for cannabis companies by July 2020 under a law signed this year. A stable token—similar to a casino chip—will store data in a closed-loop system to prevent issues like money laundering.

The voluntary program will initially target dispensaries to pay taxes, utilities, rent, and other bills using the token. Future phases could include automatic tax payments in dispensary transactions, Conine said.

Nevada may be an early adopter of an idea other states are considering. A bill to allow the use of cryptocurrency to pay cannabis taxes stalled this year in California, where the state has beefed up security at its tax department field offices to address those businesses paying in cash.

Illinois, which starts legal recreational sales in 2020, considered a cryptocurrency system but found it “easier said than done,” Illinois State Treasurer Michael Frerichs said. Frerichs said he’s watching to see if another state is successful with the concept.

Some cannabis companies are skeptical of inserting cryptocurrency into the industry. Questions include whether the system is valid or could be used to hide transaction details, said Leighton Koehler, general counsel at Planet 13 Holdings, Inc., a publicly traded cannabis company.

“The time and attention I have spent on cryptocurrency has convinced me it is a buzzword more than a valid solution to the problem of obtaining a banking relationship,” he said.

Other states have seen success in reducing cash tax payments by leaning on state-chartered banks and credit unions. Washington saw 98% of tax payments made without cash after the Washington State Liquor and Cannabis Board worked to ease banking restrictions, Communications Director Brian Smith said in an email.

Ohio has yet to see medical marijuana businesses arrange to pay their taxes in cash, Gary Gudmundson, communications director for the Ohio Department of Taxation, said in an email. The state allows bitcoin payments for business taxes, and companies may also be using credit unions. At least one credit union has said it serves medical marijuana companies, Gudmundson said.

Still, some states have run into roadblocks while seeking outside institutions to serve the industry. A West Virginia law signed in March allows the state treasurer to contract with a range of financial institutions to provide banking services for fees, penalties, and taxes collected under the state’s medical marijuana law from private growers and dispensaries.

No vendors met all the requirements in the first request for proposals, though, so it was canceled. The state revised the solicitation, with submissions due in July.

A bill pending in California would create a state bank for cannabis businesses to use. An identical bill died last year, and this year’s version has less than a month to muster support in the current session.

A report released last year by California’s outgoing state treasurer said the cannabis banking shortage will eventually solve itself. Encouraging private banks to serve the industry is a better option than creating a state bank or cryptocurrency systems, it said.

Banking workarounds don’t mean cash will disappear. States have to consider if customers and dispensaries will be willing to try a new system.

“You will always be cash-heavy if you’re selling cannabis,” said Rachel Gillette, partner and chair of Greenspoon Marder’s Cannabis Law Group in Denver, which represents businesses in the cannabis industry. “Most consumers pay in cash, and most consumers won’t want to take the extra step to change their cash in for a virtual currency if given the chance—that just doesn’t work.”

Hawaii officials have seen mixed results from a cashless solution for medical cannabis dispensaries after banks in the state declined to open their accounts. A Colorado credit union now offers them some financial services, while a separate app links to a customer’s bank account for payment.

Dispensaries served by the credit union can pay their taxes electronically but also still use cash, said Iris Ikeda, Hawaii’s commissioner of financial institutions. Customer use of the app plummeted after the U.S. Department of Justice rescinded the Cole Memorandum in January 2018 but is slowly rebounding. The Cole Memo was intended to dissuade federal prosecution of people following state marijuana laws.

“It’s been kind of an interesting evolution,” Ikeda said.

An Arizona startup called ALTA is testing a business-to-business payment club targeted to medical marijuana companies. The state attorney general recently accepted ALTA into a regulatory sandbox, which allows companies to test financial products before receiving all the necessary licenses.

The company will dispatch an armored car to members to collect cash and covert it to a blockchain-based, fixed-value token, said Jesse Forrest, CEO and co-founder. Businesses can use the tokens to pay each other or convert them back to U.S. currency.

That conversion constitutes the sale of a digital commodity, so the money can be banked, Forrest said.

ALTA is in talks with the Arizona Department of Revenue to allow members to pay their taxes through the system, Forrest said. The revenue department will review the proposal and potential operational and technological challenges once it has specifics, Spokesman Ed Greenberg said.

Cannabis retailers also face federal roadblocks, including limited options in paying their taxes with cash. Denver, for instance, only has one local IRS branch that accepts cash payments, said Gillette of Greenspoon Marder.

At the federal level, one bill addressing those challenges has garnered some attention. The Safe Banking Act of 2019 (H.R. 1595) seeks to establish protections for institutions that offer financial services to cannabis companies.

“People don’t realize how many businesses are affected by legal cannabis,” Gillette said. “I’ve seen dispensary employees have their bank accounts shut down. I’ve seen a lack of banking options affect service providers, like electricians, who are hired by dispensaries.”

Gillette isn’t confident the bill will see much action, however, despite its 206 co-sponsors.

“I wouldn’t say I’m confident in the federal bill,” he said. “Anytime it seems like something is going to happen at the federal level with cannabis, it doesn’t.”

To contact the reporters on this story: in Phoenix at bgoth@bloomberglaw.com; in Washington at rprete@bloombergtax.com