Ben Penn: The U.S. Labor Department will attract a national spotlight Monday if it debuts its first workplace safety rule specific to Covid-19, a move worker advocates have long sought that has potential to draw a legal challenge from business. The more likely first public notice that the department intends to move in this direction would come via transmission of the emergency regulation to the White House for review. We’ll be keeping our eyes glued to the online regulatory dashboard.

But it’ll be a big week for DOL on other fronts, too. Here’s a rundown:

March 15: Monday is the deadline President gave DOL’s Occupational Safety and Health Administration to unveil a Covid-19 emergency temporary standard, if the agency determines a rule is needed. It’s no small undertaking, however, and OSHA watchers increasingly expect a delay until later in the week.

If OSHA does what it didn’t do during the Trump administration and releases an emergency regulation, it likely would require employers to conduct an analysis of the potential for worksite infection and then implement a protection program based on guidance from the Centers for Disease Control and Prevention.

We can assess some of the challenges an emergency rule would face even without knowing OSHA’s secret sauce. For starters, the agency will have to dig out of a deep hole to give a rule real bite: Inspector headcount has declined steadily in recent years, and a Bloomberg Law analysis of agency data showed only 10% of OSHA inspections in the past 12 months were virus-related. The agency on Friday announced changes to reverse that trend.

Plus, while worker advocates are pressuring the administration to adopt a stringent measure to safeguard workers who are increasingly being called back to work, the business community would be eager to sue if they feel the rule goes too far.

March 16: Julie Su, Biden’s nominee for deputy labor secretary, testifies before the Senate Health, Education, Labor and Pensions Committee—and Republican senators are targeting her. The secretary of California’s Labor and Workforce Development Agency will be grilled about her role overseeing the payment of billions of dollars in fraudulent unemployment insurance claims.

Su’s background is in civil rights and wage-hour enforcement—attributes Democrats will highlight to ensure conservatives don’t succeed at making her seem toxic enough for a moderate like Sen. (D-W.Va.) to say no dice.

March 18: A St. Patrick’s Day confirmation vote for labor secretary nominee Marty Walsh would surely delight the proud Irish-American mayor of Boston—but, instead, the tentative outlook is for a Thursday vote to limit debate, according to a source familiar with the planning. Senate leadership hasn’t released an official plan for Walsh’s nomination, but a Thursday cloture vote would likely tee up a final confirmation vote on March 22.

The jam-packed Senate calendar pushed his vote back a few weeks longer than anticipated, and the delay is boosting the number of thorny, time-sensitive decisions that would await him at DOL. For instance, last week’s duo of wage-hour proposals—to abolish business-friendly Trump regulations on independent contracting and joint employment—were intentionally silent on the point of how the administration plans to advance a new approach to the hot-button employment law issues.

Gig-economy and fast-food heavyweights, like Uber and will swarm Walsh with their lobbyists, hoping he takes a moderate enforcement approach on contractor misclassification and joint-employer liability.

But Walsh, the consummate pragmatist, would inherit a clear-cut Biden preference for broad employment protections—that would leave him minimal wiggle room to strike a deal the business lobby would find workable. 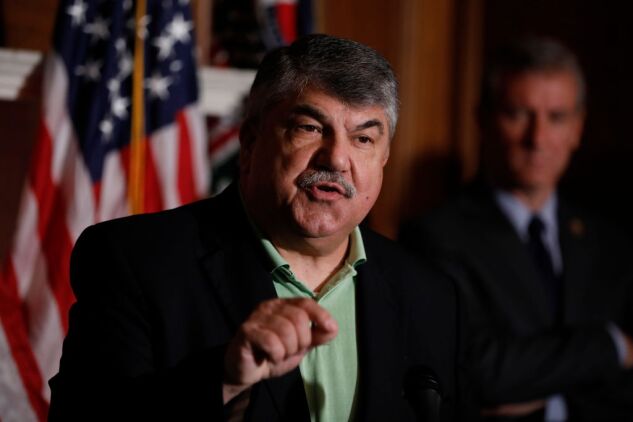 AFL-CIO President Richard Trumka is calling for the labor movement to be at the “center of the solution” for climate change.
Aaron P. Bernstein/Getty Images

Ian Kullgren: One might be under the impression that the PRO Act House lawmakers approved last week is identical to the version that cleared the chamber in 2020, given that leadership sent it directly to the floor. But Democrats slipped in a few amendments before sending it to the Senate.

But the reality is the PRO Act is unlikely to go anywhere in the Senate without changes to the filibuster—a fact that prompted the AFL-CIO executive board to call on Democratic senators to get rid of the 60-vote threshold, if Republicans don’t budge.

In a scathing statement Thursday, the federation’s executive council called the filibuster “an artifact of Jim Crow [and] a creature of white supremacy.”

Sen. (R-Fla.) surprised everyone Friday by publishing an op-ed in USA Today supporting the Amazon workers seeking to unionize in Bessemer, Ala.—a signal he might be amenable to backing the PRO Act.

Yet unions were skeptical about Rubio’s move.

The administration estimates about 320,000 people will be eligible. If correct, that would make Venezuelans the largest population of TPS recipients, surpassing nearly 250,000 immigrants from El Salvador.

The temporary protected status program allows nationals of a foreign country to live and work in the U.S. because an armed conflict or natural disaster prevents their safe return to their home country. Lawmakers on both sides of the aisle had long called for Venezuela to qualify in response to worsening conditions in the country under President Nicolas Maduro.

That work authorization is likely to especially have an effect in the places where Venezuelans reside. About 53% of Venezuelan immigrants live in Florida, and the second-largest destination state, Texas, accounts for another 12%, according to research from the Migration Policy Institute.

The majority of the potential TPS population is of working age as well, with 79% between the ages of 18 and 64. Venezuelans in the U.S. also have “considerably higher” levels of education compared with foreign- and U.S.-born adults, especially in terms of four-year college degrees, MPI found.

Sen. (D-N.J.) told reporters last week that the TPS designation was “a far greater privilege than what the Trump administration did on their last day in office.”

TPS is designated using statutory authority, whereas deferred enforcement is an executive action that can be given or revoked on the whims of the president.