See Ya When I See Ya

Trudge into the office or take a hit on payday?

For fans of drama-free, traffic-less living the answer is simple: Shut up and take my money.

Videoconferencing company Owl Labs surveyed 1,200 full-time employees about the state of remote working for its annual report. The U.S.-based respondents weighed in on everything from what they like best about setting up shop anywhere—91% said it provided better work-life balance—to how much of their lives they spend in meetings (one in four remote workers said 11-plus meetings per week is par for the course).

The benefits of never stepping foot in another cubicle farm are so great, in fact, that some folks would be fine with giving up a part of their paycheck in return. 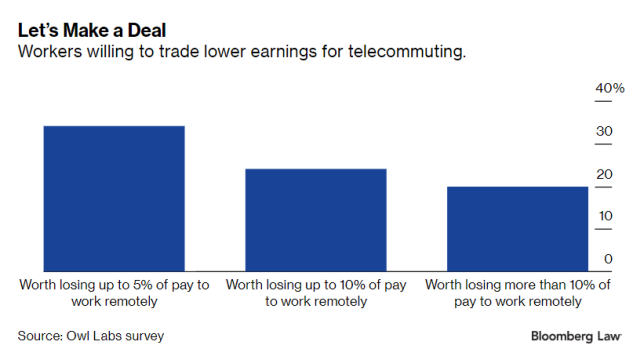 Taking telecommuting off the table would cause many respondents to re-evaluate their options. Fifty-five percent of respondents said they’d look for another job if remote work went away, while three out of five (61%) said they’d need a pay raise to stay.

At least that’s what the Guardian Life Insurance Co. of America discovered as part of its latest workplace benefits checkup.

“For the first time in four years, fewer working Americans (45%) believe their employers care about their overall well-being,” the life insurer warned. “This attitude also extends to a steady decline in satisfaction with the perceived value of benefits being offered by employers.”

Where is management falling short?

“When workers feel their benefits package is not meeting their personal needs, it is easy for them to conclude that their overall value to the company is less important,” Guardian’s analysts wrote.

Open enrollment season can be traumatic.

Workers said they’d gladly sign up instead to discuss their weight (33%) or to lay bare their personal finances (18%). Other uncomfortable situations that outranked the annual slog through HR materials include asking for a raise (nearly 50%) and opening up about mental health issues (26%).

Is there anything worse? Sort of.