A dog named Lucy plays in the offices of Embark, a Boston startup that tests dogs’ DNA, in May 2019.
Photo by John Tlumacki/The Boston Globe via Getty Images

Counting the days till summer vacation? Do you have your HR department on speed dial? Check this space every Friday to keep up with the latest water-cooler talk.

Speak—SPEAK!—if turning the next team meeting into a pooch-packed playdate sounds like a howling good time.

It’s a most timely topic as June 21 has been branded Take Your Dog to Work Day. Pet food producer Wellness is using the occasion to tout its annual roundup of the pet-friendliest companies in America. (Among the leaders: Amazon, Ben & Jerry’s, and TripAdvisor.)

A separate poll about allowing pets in the workplace includes some intriguing morsels. 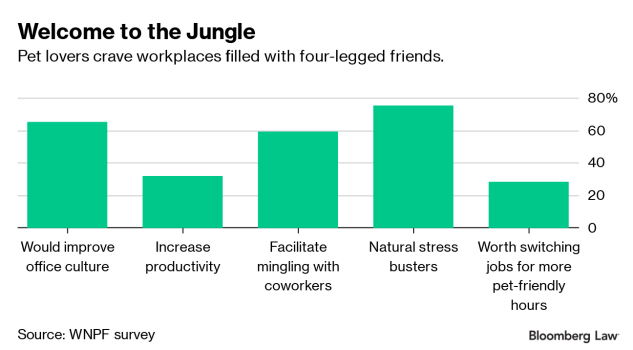 Three in four respondents (75%) said having pets around would help relieve daily stress. Over half (59%) predicted the pets would help them “get to know colleagues better.”

Worried the pitter-patter of tiny paws might prove too disruptive?

A majority of respondents (54%) report “feeling distracted at work thinking about their pet at home.” And a third (33%) noted that caring for Fido “interferes” with work hours.

Over a quarter of respondents said they’d change jobs if it their new gigs allowed them to spend more time with furry friends.

That revelation springs from HR provider Hibob’s survey of employees who don’t appreciate being misled about their workload.

Over 250 of the 1,000 respondents said they hadn’t received enough information about their current job before accepting the offer. Roughly four in 10 estimated their day-to-day responsibilities “completely reflect” the way the job was presented during the hiring process.

All of which adds up to approximately two-thirds of respondents (64%) souring on a new gig because of a “negative onboarding experience.” And four in 10 are projected to quit within the next year.

“The quitting economy is a serious issue facing businesses across the U.S., and it’s showing no signs of stopping,” Hibob CEO Ronni Zehavi warned in a press release.

Financial hub GOBankingRates says the Magnolia state is where retirees can make the most of their golden years.

Mississippi beat out 50 other potential landing spots in GBR’s ranking of the most “comfortable” locations to retire. The criteria included: most bang for the buck of your nest egg; per capita spending on groceries, health care, housing, and transportation; and projected retirement spanning 20 years (baseline savings amount: $2 million).

Mississippi claimed the top spot based on the “lowest overall cost of living in the U.S.” Analysts estimate that those with $1 million saved would never want for anything. “The principal alone would last you nearly 19 years in Mississippi, without even investing a single dime,” per the report.

A companion release includes supplementary data such as the average temperature in Mississippi (63 degrees Fahrenheit) and the cost of a semiprivate room in a nursing home a ($6,700 a month).

On the other hand, moving to paradise would be only slightly more expensive than watching the world go by in the swampy, traffic-plagued District of Columbia ($101,000 per year; $2 million over 20 years).