Chasing pay bumps isn’t for everyone.

Sure, there are those who float from job to job seeking that next-level salary. But they’re evidently a rarity among personnel propping up fledgling companies.

Venture capital firm First Round polled nearly 1,000 company founders and employees for its annual state of startups recap, adding staff feedback to the equation for the first time.

Compensation, naturally, came up in the conversation about why workers chose to join their current company.

But it barely registered with this bunch. 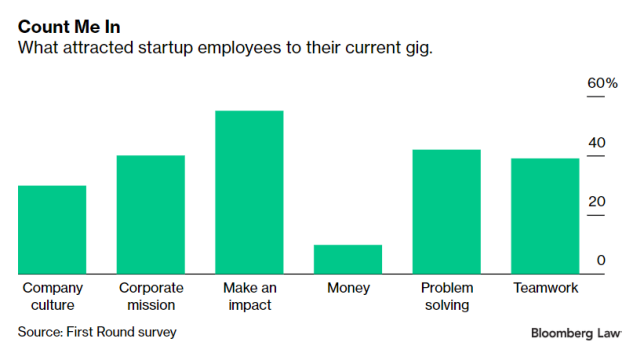 Around one in 10 billed their paycheck as the “primary reason” they signed on with their current employer. The biggest vote getter was the opportunity to “make an impact” (55%), followed by taking a crack at specific problems (42%).

Other motivating factors included their co-workers (39%) and the company’s overall culture (30%).

Spread the Love Around

Stop with the single servings of appreciation.

That’s what respondents told employee engagement firm Reward Gateway about having to wait until the holidays for any sign of acknowledgment from management.

About half (46%) of the employees surveyed said they’d rather get discounts on “everyday purchases” than attend a work-sponsored holiday party. And 58% of recent college graduates said they’d rather have corporate rewards sprinkled throughout the year than count the days till a holiday bonus arrives.

Nearly two-thirds (65%) of the respondents said company execs could “could do more to understand what would be most helpful to them during the holiday season.”

Impeachment is on hiatus until next year. The last get-while-the-getting’s-good spending bill has been inked into law.

What else has Congress been up to?

Turns out lawmakers in both chambers came together to drop a bipartisan work-training proposal before closing the books on a highly contentious session.

The nascent Youth Workforce Readiness Act of 2019 (H.R. 5236; S. 3144) would carve out $100 million in federal grants a year from 2020 through 2024 for nonprofits that plan/develop/implement workforce training programs for interested teens.

“The Youth Workforce Readiness Act recognizes the time kids spend after-school and during the summer, to develop these skills, as critical for ensuring equity for all young people,” said Jim Clark, president and CEO of the Boys & Girls Clubs of America. “By supporting out-of-school time youth development organizations, we can close the opportunity gap that exists for so many kids and teens today.”