Houston, We Have a Problem

That’s what insurance broker Policygenius stumbled upon in its latest survey on health-care coverage. Feedback from the roughly 1,500 respondents shows how dangerously little people know about the system that’s supposed to take care of them.

And the lack of understanding is pervasive. 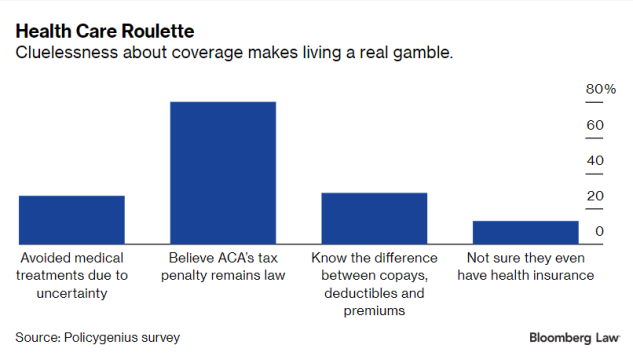 Uncertainty clouds everything from whether to seek treatment (27% have skipped it) to affirming that they have any kind of coverage (13%).

Even if they wanted to make a change, most workers remain in the dark about when they could do so. Just one in 10 (12%) correctly identified the dates for the 2019 open enrollment season.

And things are unlikely to become any clearer as the political grudge match over eviscerating the Affordable Care Act rages on.

“If you shift the frame back say, even 20 years ago, people didn’t know what [health care] cost but it didn’t matter because their insurance company just covered it,” National Patient Advocate Foundation spokeswoman Christine Wilson said of the confusing times.

Then there are those who know all too well what they’ve sacrificed at the altar of health care.

Health savings account vendor Lively checked in with 1,000 folks about how insurance costs affect their finances.

Over half of the respondents (52%) reported having to ax other fiscal priorities, such as funding retirement accounts (25%) and paying down debt (23%), in order to deal with health-care issues.

Meanwhile, a third of the respondents (33%) said “fun” stuff—including taking vacation (24%)—has gone out the window.

Other actions and activities that have been set aside: quitting their current job (8%), switching to part-time work (7%), attending a relative’s/friend’s wedding (6%), planning their own wedding (4%), and taking a honeymoon (3%).

Life comes at you fast.

So fast, sometimes, that mortgaging one’s future seems like the only way out.

That’s what retirement loan insurer Custodia Financial survey discovered after quizzing workers who have prematurely cracked open their 401(k)s to get out of a bind.

While industry professionals and government agents have repeatedly sounded alarms about the long-term damage “leakage” inflicts on retirement savings, account holders keep tapping into their nest eggs when times get tough.

“By and large, participants are using the loan feature for ‘financial firefighting,’ rather than for discretionary expenses such as vacations,” analysts wrote of the cash grabs. Nearly a third of the respondents (32%) reported withdrawing less than $5,000 in emergency funds, while just 5% copped to pulling out more than $50,000.