Rx for the ER

Stressed out doctors are done biting their tongues.

“When all the scheduled patients show up it makes work unbearable,” one harried respondent told health-care technology provider Geneia as part of its annual survey.

The 400-plus physicians weighed in on everything that’s wearing them down. They ticked off gripes ranging from hectic work days—describing bathroom breaks as “a luxury”—to the dwindling amount of “quality time” they get to spend with individual patients.

That frustration spilled over to what they’re not getting enough of in terms of their own welfare. 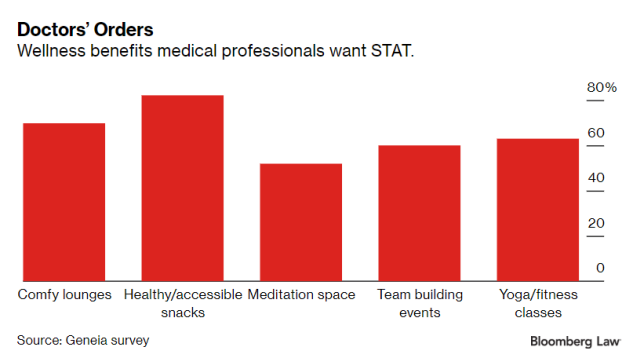 Sick of It All

The thing about health care is it’s not a panacea.

Respondents to the Transamerica Center for Health Studies’ latest survey let everyone in on that painful truth, detailing the tough calls they make to stay covered by employer-sponsored plans.

Various groups said they’ve canceled existing medical appointments because of the cost, including Latinos (37%) and millennials (31%). Over half of the respondents (51%) admitted to remaining chained to their current job strictly for the health insurance. And nearly a third (30%) said they’ve quit jobs because a prior employer didn’t offer health benefits.

“Health costs can be very expensive, particularly for the 66% of Americans reporting a physical or mental health condition,” TCHS Executive Director Hector De La Torre said of the working man’s catch-22. “Even for those without a health condition, there is always a concern that they or their loved ones may someday require healthcare that can devastate their finances.”

Ready for the holidays?

Temporary workers are. Some have been for months now.

Hiring hub Bluecrew checked in with hourly workers about filling in the gaps as companies do their best to separate consumers from their carefully rationed gifting dollars.

Roughly one third of the respondents (32%) said they’re raring to go—so long as they’re rewarded with $13.26 an hour (or more). Nearly six out of 10 respondents (58%) said they’re picking up holiday shifts to earn extra cash, while two in five (40%) mapped out plans to put any earnings toward covering monthly bills.

Veterans of the seasonal hiring blitz reported starting early this year. Approximately 15% said they began looking for temp gigs in July, with 25% putting out feelers in August. Around one in three (34%) said they started searching in September. Nearly a quarter (21%) said they’ll get to it this month.