A growing number of employees in Oregon are stashing away some of their earnings under a state-run retirement savings program, and four other states are set to follow.

OregonSaves, the first state retirement savings program for private-sector employees to go into effect, had about 300 employers registered with the system and 19,230 employees with active accounts as of Jan. 24, a spokesman for the program told Bloomberg Law. The plan took effect in October and is paving the way for similar plans in other states.

“We are pleased that to date most employers have been supportive of OregonSaves. That includes employers with and without plans,” Oregon State Treasurer Tobias Read told Bloomberg Law in an email. “Everyone agrees that more saving by more people is the right answer.”

California, Connecticut, Illinois, and Maryland all have similar automatic enrollment laws on the books that have yet to take effect. The laws are designed to require businesses that don’t offer a retirement savings plan of their own to register with the program and automatically enroll employees into an individual retirement account. Such programs are commonly referred to as “Secure Choice” plans.

But the plans face an uncertain future after the Labor Department rolled back rules that changed the definition of an employee pension benefit plan under the Employee Retirement Income Security Act. The DOL did so at the direction of Congress, which voted last year to undo the DOL’s rules. The rules, put forward during the Obama administration, exempted states and cities that created savings arrangements for private-sector workers.

It’s possible for programs like Oregon’s to operate without the rules in place, but the rules made it easier by specifically exempting the plans from ERISA. 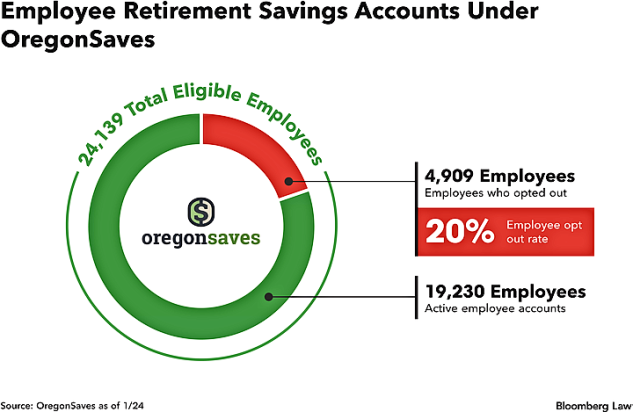 The Oregon program opened up registration Oct. 15, 2017, and will slowly have deadlines for employers to register up through 2020. As of Jan. 24, about 20 percent of employees had opted-out of opening an IRA, according to numbers given to Bloomberg Law by OregonSaves.

During the pilot phase of the program, which included 53 registered employers, 1,880 Oregonians saved about $260,000 for retirement, according to the program’s annual report to the state legislature. The average contribution was $54.35.

OregonSaves is also testing the waters for other state plans in court.

The ERISA Industry Committee (ERIC) filed a lawsuit in July 2017 challenging the authority of the program to require businesses that already offer ERISA-sponsored plans to their employees to report their plans to the state of Oregon.

ERIC is an advocacy group that represents the interests of large companies on employee benefits issues.

Although OregonSaves wouldn’t comment on the case, Read, who is the defendant in the lawsuit, told Bloomberg Law that Oregon is “supportive and thankful for those businesses who are already offering savings options for their employees.”

“They are a key part of the solution,” Read said.

Will Hansen, ERIC vice president of retirement and compensation policy, said the group wouldn’t comment on the pending litigation, but he added that the organization “is hopeful that we can determine a national solution” through existing forms of employee benefits data.

ERIC praised the language California used in a draft of its retirement savings program regulations in a December 2017 comment letter, encouraging the board to “not add any new compliance mandate that would increase the cost to operate a tax-favored retirement plan.”

At a Jan. 22 meeting, California’s Secure Choice Retirement Savings Board delayed the issue date for its emergency regulations to Feb. 26 in order to refine procedures for enrollment of participants.

To contact the reporter on this story: Madison Alder in Washington at malder@bloomberglaw.com

To contact the editor responsible for this story: Jo-el J. Meyer at jmeyer@bloomberglaw.com