It’s been nearly 10 years since Congress put in place a law that bars health insurers from putting certain limitations on coverage for mental health issues. That law is enforced by the Labor Department’s Employee Benefits Security Administration, and the agency is seeing a rise in violations by insurers.

New data from EBSA indicates the agency in 2017 investigated 187 plans subject to the Paul Wellstone and Pete Domenici Mental Health Parity and Addiction Equity Act of 2008. That law prevents group health plans and insurers that provide mental health and substance abuse disorder coverage from treating those benefits differently than other medical benefits.

Of the 187 plans that were investigated, EBSA found 92 violations. What’s more, the agency had 60 fewer investigators than it had the previous year when it conducted slightly more investigations and found half as many violations. 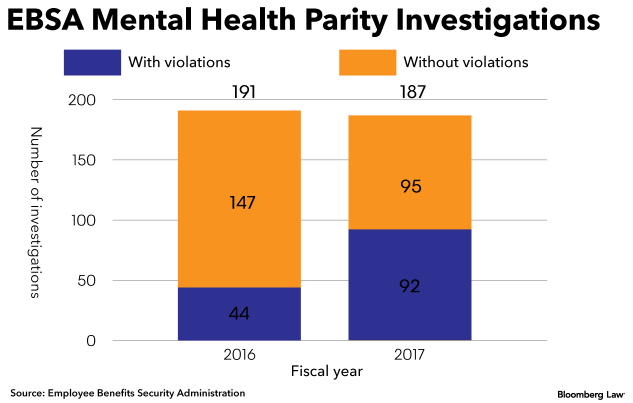 That increase in violations is “a disturbing trend,” Andrew Sperling, director of legislative affairs for the National Alliance on Mental Illness, told Bloomberg Law.

Few complaints make it all the way to the agency for review, so the number of investigations is only a portion of the total across all plans, Sperling said. Many people can resolve complaints about their plan coverage through internal administrative reviews, and that isn’t included in the data.

“They don’t have a police force,” Sperling said of EBSA. The agency can audit and provide enforcement, but that takes staff, he said.

The agency’s staffing has been on a decline for the last couple of years. Staffing was down 17 percent in 2017 from a staffing peak during the Obama administration. Sperling estimated the agency would need about $10 million to $30 million more a year to hire staff to keep up with audit compliance reviews.

“EBSA, in an attempt to better leverage resources, has increasingly targeted investigations to achieve maximum results, including closing more cases with multiple violations,” a DOL spokesman told Bloomberg Law in an email. “The number of violations also varies according to the particular investigations that we close in a given year, and the characteristics of the plans we are investigating.”

But some think the agency is in over its head.

“I don’t think you can count on the Department of Labor to enforce this stuff,” Jordan Lewis, a Fort Lauderdale, Fla.-based attorney who has filed several class actions against insurers seeking coverage for mental health treatments, told Bloomberg Law.

Private enforcement of the law is more reliable because lawyers are motivated to vindicate these claims, he said.

The violations being addressed by EBSA and in the courts have evolved. Quantitative treatment limitations, or violations based on inequity in dollar amount or length of care, are beginning to go away.

“The quantitative treatment issues are the low-hanging fruit” and easily fixed under the law, Brian S. King, a Utah attorney who specializes in Employee Retirement Income Security Act cases, told Bloomberg Law. The focus now is shifting to nonquantitative treatment violations, such as lack of coverage for certain types of care.

The law’s effectiveness has been a “mixed bag” since its enactment, Sperling said. Recent proposed guidance from the DOL to help plans with compliance, and an enforcement action plan released by the Department of Health and Human Services—which also spearheads compliance with the law—is a step in the right direction, he said.

“Communicating the guidance will be key,” Jillian Lampert, chief strategy officer for the Minnesota-based eating disorder awareness organization The Emily Program, told Bloomberg Law. The proposed guidance is in the form of frequently asked questions that help people understand how to report, when to report, and how to get an investigation. The guidance discusses the nonquantitative treatment limitations, which has been an area of confusion, she said.

Federal mental health parity law “hasn’t been as effective as we hoped, but we’ve been making progress in the last two years,” Lampert said. Part of that progress was in the 21st Century Cures Act, which applied the parity law to eating disorders as well, she said.

While EBSA is charged with enforcing the law and has cited more than 300 violations since 2010, the agency lacks authority to take action against health insurers for parity act violations.

That means the federal mental health parity law is enforced largely by plaintiff-side attorneys who bring lawsuits against insurers and health plans under ERISA.

When insurers prevail in these lawsuits, it’s sometimes because judges agree residential treatment wasn’t medically necessary for the patient.

Other mental health parity cases seek coverage for less traditional treatments. At least 10 proposed class actions have been filed seeking coverage for wilderness therapy to treat young people with behavioral or substance abuse issues by combining traditional therapy methods with outdoor activities like hiking and camping—often at a cost of more than $500 per day.

Cases have targeted UnitedHealth, Cigna, Blue Cross and Blue Shield of Minnesota, Harvard Pilgrim, and Empire HealthChoice, among others. In 2017, Cigna became the first insurer to beat one of these lawsuits when a federal judge found the case was premised on an individual denial of coverage and not on a coverage limitation that applied more strictly to mental health benefits.