The explosion of litigation over 401(k) plan fees that began in 2020 has translated into an impressive early win rate for the plaintiffs’ bar and tens of millions of dollars in settlements, a Bloomberg Law analysis found.

More than 170 lawsuits challenging retirement plan fees have been filed in federal courts since 2020, a large increase fueled in part by an emerging blueprint for filing cases and increased scrutiny from plan participants during the Covid-19 pandemic.

The proposed class actions, which are pending in more than half of U.S. federal district courts, accuse employers of mismanaging their retirement plans in violation of the Employee Retirement Income Security Act by offering expensive investments and failing to rein in administrative fees. 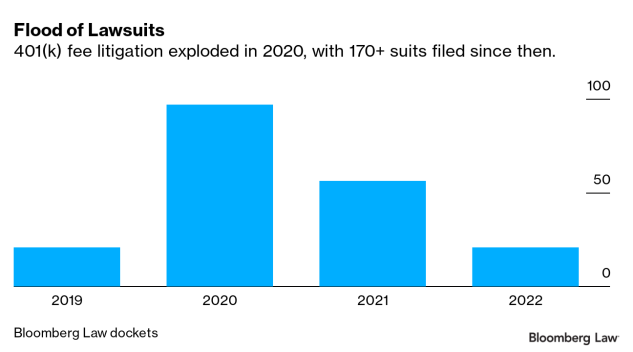 Dozens of courts have ruled in these lawsuits, and they’ve largely favored employees and their lawyers. Of the cases filed since 2020, more than 50 have at least partially survived a motion to dismiss, and only about a dozen have been dismissed.

Those early victories may spur more lawsuits alleging poor plan management, or encourage employers to look for ways to improve their plans. They also may require defendant companies to engage in expensive discovery, drive up their insurance costs, and make it more likely they’ll agree to settlements.

At least 19 employers sued since 2020 have signed class settlements with a combined value of more than $68 million, in some cases before receiving a ruling on the merits of the case. Most settlements have ranged between $500,000 and $4 million, with one big exception: signed a $32.5 million class settlement with employees challenging the affiliated funds in the bank’s 401(k) plan.

Lawyers disagree on why the cases have been faring well in courts so far. Plaintiffs’ attorneys say the cases are well-researched and aimed at especially bad plans, while defense-side lawyers say they rely on superficial complexity and shifting goalposts to get past a motion to dismiss.

The litigation effort recently got a boost from the U.S. Supreme Court, which in January passed up an opportunity to announce stricter standards for ERISA complaints. The court’s unanimous decision in Hughes v. Northwestern University rejected a categorical rule that would excuse a plan’s decision to offer expensive or poorly performing funds if good funds are also offered. The court resisted announcing other rules to guide the judges hearing the cases.

The U.S. Chamber of Commerce has begun an unusual campaign, filing amicus briefs in the early stages of several ERISA lawsuits. The Chamber is urging judges to reject what it sees as “cookie-cutter” lawsuits that hurt retirement plans and individual investors while enriching lawyers.

Plaintiffs’ attorneys attribute their success in part to doing significant research and financial analysis to ensure they have evidence for allegations that targeted plans are being mismanaged.

White says he weeds out the vast majority of potential cases and tends to file only ones that deserve time and investment, since they can take three or four years to resolve.

It’s “somewhat easy” to make an ERISA complaint appear superficially complicated and fact-intensive, Jaime A. Santos, a partner with Goodwin Procter LLP, said. Plaintiffs’ attorneys often fill their complaints with numbers and charts in an effort to signal to judges that the case turns on factual questions that can’t be resolved quickly, she said.

Santos, who defends retirement plan sponsors and has filed briefs on behalf of the Chamber, added that such lawsuits remain less common than the gender discrimination and wage cases that tend to fill court dockets. Many judges still haven’t seen one in their courtrooms and might not have a full picture of the legal landscape, she said.

“Judges have less familiarity with what kinds of complaints are plausible and what kinds are fishing expeditions,” Santos said.

‘The Bar Moves Every Day’

The litigation push has proven frustrating to fiduciaries running retirement plans, who get conflicting signals about how employees feel their plans should be run.

“It seems to fiduciaries that the bar moves every day, and no matter what they do they’re getting sued,” Santos said.

Santos said that for several years, plan fiduciaries were sued for allowing plans to pay annual recordkeeping fees above $35 per person. But more recent lawsuits have moved the goalposts, accusing employers, including , of failing to reduce the fees below $20 per person, she said.

But plaintiff-side lawyers say the cases are too labor-intensive for them to waste time suing well-managed plans.

“I don’t have time to file a lawsuit against a plan that’s done a good job picking their funds, and I don’t think any lawyer does,” Andy Fitzgerald, an attorney with Fitzgerald Hanna & Sullivan PLLC, said. “If anybody does, then they’re not smart enough to be doing this litigation.”

Fitzgerald, who’s filed retirement plan lawsuits against Shoe Show Inc. and a unit of Advance Auto Parts Inc., also pushed back on the idea that the cases amount to easy wins for plaintiffs. Employers facing ERISA class actions get to defend themselves in federal court and don’t have to worry about proceeding in front of a jury, he said.

“They’re guaranteed a bench trial with a judge that was appointed by a president and approved by Congress,” Fitzgerald said. “Grandma doesn’t get that if she runs a red light and hits somebody.”