A GateHouse Media owned Palm Beach Post and the Gannett Co. owned USA Today are seen for sale at a newsstand in Palm Beach, Fla.
Photo by Joe Raedle/Getty Images

“The pensions are going to get taken care of,” former PBGC director Tom Reeder said, stressing that even if the shrinking media landscape produces a fresh wave of bankruptcies, it wouldn’t be a “debilitating blow” to the agency’s finances.

According to its annual report, PBGC paid $6 billion in benefits to single-employer plans in 2019, and still ended the fiscal year $8.7 billion in the black. The agency spent $160 million propping up underfunded multiemployer plans; that program closed out 2019 with a $65 billion deficit.

Some involved preemptive action similar to the agency’s rush to assume control of Sears’ workers’ pensions before the flagging retailer liquidated everything. PBGC estimated that Sears’ pension plans were underfunded by $1.4 billion when it assumed control of the 90,000 participants.

Those interventions are the product of participating in the “death and renewal” of wavering sectors (auto, manufacturing, agriculture) over the years, said Israel Goldowitz, a PBGC alum turned partner at Wagner Law Group.

Over time, the demands have multiplied—as evidenced by underfunded airline pensions. 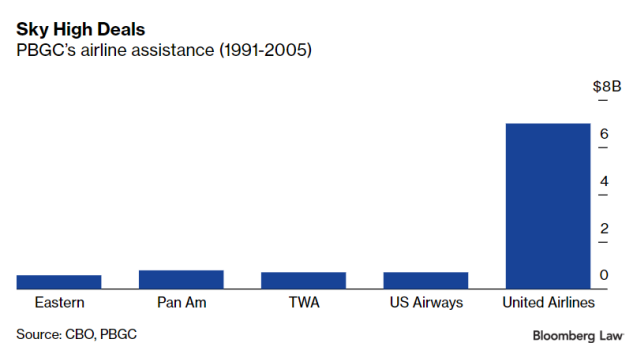 A Congressional Budget Office report shows the combined claims from bankruptcy filings between 1991 and 2003 falling just short of $3 billion. United Airlines dwarfed them all by imposing a roughly $7 billion hit on the PBGC when it sought bankruptcy protection in 2005.

“The PBGC certainly is aware of industries that are under stress,” Goldowitz said, noting that those being “disrupted” by technological breakthroughs, global competition, or demographic shifts in the workplace tend to garner attention. The agency’s latest annual report lists manufacturing, transportation, communication, utilities, and services as exposure risks.

McClatchy froze its plan in 2009, limiting coverage to approximately 24,000 participants. It asked the Internal Revenue Service to waive three years of pending payments, but the IRS rejected that bid earlier this year.

Absent any changes, the company owes $124 million in required contributions next year, with staggered payments scheduled to start in April 2020. Negotiated cash infusions are one of the administrative tools available to plan sponsors seeking to bolster at-risk plans.

All indicators point to McClatchy’s management arguing that divorcing itself from the pension via a distress termination is the only way the rest of the company could survive.

PBGC declined to comment about where things stand with McClatchy.

“Every case is unique and there are many factors to consider; but at the end of the day, our top priority is protecting the retirement security of workers, retirees, and beneficiaries,” a PBGC spokesperson said.

“There can be no assurance that the ongoing discussions with PBGC and our largest debt holder will result in any consensual transaction,” McClatchy’s management said.

“I think that the fact that the IRS rejected the funding waiver is a sign that negotiations with the PGBC might be difficult as well,” he said.

“We’ve seen this happen, of course, in other industries: manufacturing, telecom,” the founder of Virginia-based Borrell Associates said. Legacy media, he argued, is simply following in the footsteps of others who sought to shed overwhelming pension costs, looking for any way to lighten their load, even renegotiating labor contracts, “as they try to reform and keep their heads above water.”

Meanwhile, staying on top of potential problems is standard procedure among pension wonks.

The Department of Labor’s benefits arm currently has two newspaper-related unions—one in Detroit, and another in Philadelphia—on its watch list of underfunded programs staring at insolvency within 20 years.

The PBGC is definitely monitoring those critical and declining plans, Reeder said. And bracing for the worst.

“An increasing number of them are going to be turned over to the PBGC,” Reeder said of underfunded plans in general.

Preserving promised benefits is great for journalists lucky enough to reap those vanishing rewards, Borrell said. What worries him is hoefit that you can’t offer a quality individual to come and work for you,” he said.