Activists outside the headquarters of the European Union in Barcelona during the 2017 Summit in Paris demand the abandonment of investments in non-sustainable energy. In the U.S., the federal government has proposed rules that, according to proponents of socially responsible investing, would make it more difficult for fiduciaries of retirement accounts to put money into those funds.
Photographer: Paco Freire/SOPA Images/LightRocket via Getty Images

A U.S. Department of Labor proposed rule on when retirement-plan fiduciaries can consider socially responsible investments represents a return to a time when maximizing returns or altruism was considered an either-or choice, advocates say.

Even though about a fourth of domestic assets under management involves some type of environmental, social and governance (ESG) investing strategy, those funds were options in only about 3% of 401(k) plans as of 2018, according to the website financial-planning.com.

Supporters say the proposed rule will further discourage fiduciaries from considering those investments.

“The language alone in the document, it is almost like a throwback to the 2008 era when they talk about ESGs in something other than on financial terms,” said Bryan McGannon, director of policy and programs at US SIF, a nonprofit advocate for sustainable investing.

“Climate risk is a financial factor for most companies. Supply chain disruptions are a financial risk to companies. The proposal dismisses ESGs outright. Their assumption is starting in the wrong place.”

As proof, many ESG investments are doing well in the midst of this public health crisis.

“Certainly the more recent past has been one that has been favorable for ESG products because, in many cases, those products have little to no exposure to fossil fuels, and energy stocks in particular were harmed significantly over the last several months and years,” said Rich Powers, head of ETF product management at Vanguard.

The proposed rulepublished June 30 compels plan fiduciaries to prove they’re making investment decisions based solely on economics. Fiduciaries deciding to invest in a socially responsible vehicle must provide documentation that it’s economically indistinguishable from other options.

They must show “why the selected investment was chosen based on the purposes of the plan, diversification of investments, and the financial interests of plan participants and beneficiaries in receiving benefits from the plan,” according to the proposed language. ESG investing can be incorporated if there’s a financial justification, such as reduced volatility in returns in exchange for a reduced return.

A Labor Department spokesman declined in an email to comment on the proposed rule while saying anyone with an opinion should file comments during the rulemaking process. The agency has set July 30 as the comment period deadline.

“What the department is stating in the proposed rule is that you can’t sacrifice returns for some collateral goal,” said Glenn Spencer, senior vice president for the Employment Policy Division at the chamber.

That assumption is anathema to advocates who argue that social responsibility is necessary to achieving the highest returns.

“When a company pollutes the environment, it increases risk to its investors from litigation or cleaning up the mess it has made,” said Andrew Behar, the CEO of As You Sow, a nonprofit that educates investors on ESG. “If a company doesn’t have thoughtful human resources, employee retention decreases, which goes right to the bottom line in recruiting and retraining costs.”

For 2019, 35% of sustainability funds ranked in the top quartile of their respective asset class, according to a Morningstar report. Almost two-thirds placed in the top two quartiles. Only 14% of sustainable funds performed in the bottom quartile.

The iShares ESG exchange-traded fund, a broad index of stocks with sustainability characteristics, had a total return of 53.9% from its inception in December 2016 to the end of this year’s second quarter, according to data compiled by Bloomberg. That compares with 50.4% for the Standard & Poor’s 500 index over that span. 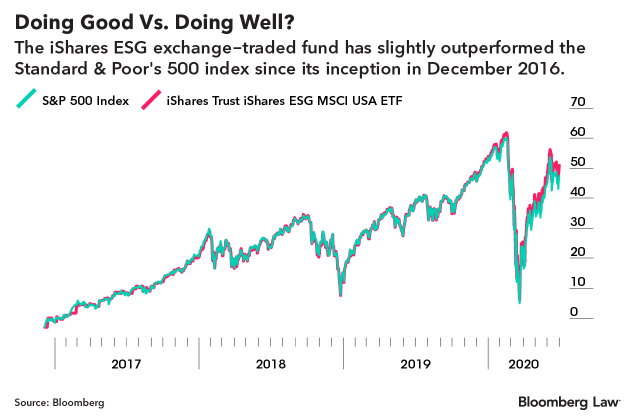 Socially responsible investing started about 40 years ago when investment firms incorporated a process for filtering specific components from their investments -- particularly companies in oil, defense, and tobacco.

ESG investments amounted to about $639 billion in assets when US SIF began tracking it in 1995. Since then, investments in those products have increased 18-fold, with a compounded annual growth rate of almost 14%, according to its 2018 trends report. It now represents about $11.6 trillion in domestic assets under management.

“A big piece of this is that people should know they do not have to trade off their beliefs and values for making money,” said Sharlene Brown, a senior fellow at the Croatan Institute, a research institute that also supports ESG investing. “You can actually do both and do well.”

But proponents have yet to convince a substantial portion of employers to begin offering products specializing in ESGs for retirement investments.

Reading Between the Lines

Retirement plans, from pensions to 401(k) plans, are governed by the Employee Retirement Income Security Act of 1974, which generally states that economic considerations are paramount when deciding on the types of investments to include in the plans.

Previous Labor Department rules have permitted ESG investment vehicles, so long as the return and risk profiles are like non-ESG counterparts. If they are, then other, non-pecuniary considerations, such as socially responsible investments, can be used as an additional factor for deciding whether to invest.

Under the new proposal, fiduciaries must document how they decided there isn’t a distinguishing economic factor between the ESG investment they incorporate into a retirement plan versus one that is non-ESG. They must also explain , along with explaining why they decided on the specific investment based on goals, diversification criteria, and the financial interests of plan participants.

The department estimated that each plan fiduciary will spend 600 hours maintaining the necessary documentation, at a cost of about $57,000 per plan annually. McGannon said these additional documentation requirements apply solely to ESG investments.

The proposed rule will effectively dampen adoption because plan fiduciaries will claim, “‘you know what, it is a lot easier not to bother with that stuff, we will do these other plans that are not ESG that are not going to attract any undue attention in DOL or open us up to litigation,’” McGannon said.

To contact the reporter on this story: in Washington at rchapoco@bloombergindustry.com