As state finances across America are upended by the coronavirus, almost all of them face the same, self-imposed, problem: How to balance their budgets.

Forty-nine out of 50 U.S. states have adopted some kind of balanced-budget requirement that forces them to raise taxes or cut spending if revenues fall short of projections — in theory. Vermont is the only exception.

In practice, however, elected officials have found various ways to get around them over the years. And as costs related to Covid-19 mount, the temptation to take advantage of those fiscal-planning loopholes will only grow.

“The rules are not ironclad,” said Yilin Hou, a professor at Syracuse University. “The simple reason being that state governments must operate to provide the services demanded by citizens, however harsh the rules are.”

How lawmakers get around their own balanced-budget mandates is laid out in a study from the Institute for Truth in Accounting. Below are some examples.

For a state, most people would equate revenue with money collected from taxes and fees. Yet some balanced-budget requirements don’t specifically define revenues as such.

In 2018, the state of Pennsylvania entered into a “lease back” agreement with Blackford Ventures for its farm-show complex. The state got $200 million from the land developer for the property, but pays back Blackford what effectively amounts to a mortgage with 5% annual interest to keep using the complex. Pennsylvania counted the money from the loan, which would usually be considered debt, as revenue. 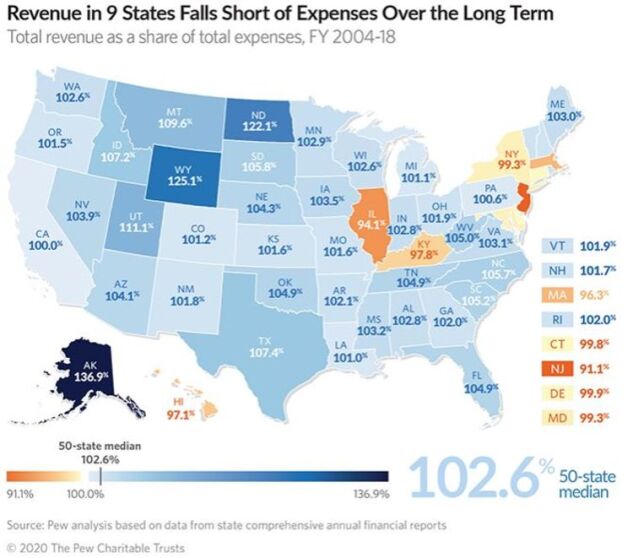 If the budget is looking tight this year, a state can always negotiate to move some expenses into the next, claim a savings and deal with the costs down the road. It might not be easy to get a business to agree to such an arrangement, but in New Jersey’s case, it didn’t have to worry because it was dealing with its own pension fund.

In 2014, Former New Jersey Governor Chris Christie slashed the state’s contribution to its pension by more than $2 billion over two years to balance the Garden State’s budget. His final budget included a pension contribution, a record at the time, but far less than the recommended amount to cover the pension’s widening shortfall.

The maneuver enabled Christie to tout his administration’s fiscal responsibility, yet the state’s pension system hasn’t fared nearly as well. It now has the second-worst funded ratio in the country, trailing only Kentucky, according to a 2019 report from the Pew Charitable Trusts.

New Jersey is now predicting a shortfall of over $10 billion through fiscal year 2021, according to state Treasurer Elizabeth Muoio, after Governor disclosed that April revenue plunged 60% due to the effects of the Covid-19 lockdowns.

Sometimes “balanced” doesn’t mean what you might think it does. A state budget can be balanced while simultaneously running a “structural deficit” — that is, when recurring revenue isn’t enough to pay persistent expenditures.

In the wake of the Great Recession, deep spending cuts by many states weren’t enough to offset a slower-than-anticipated economic recovery. A 2018 Pew Trusts report cited 10 states that had “chronic shortfalls” that threatened to create an “unsustainable fiscal situation.”

Illinois, for example, ran a budget deficit of 6% from 2004 through 2018, according to Pew Trusts, despite having a balanced-budget amendment. In explaining the shortfall, a report from Illinois Policy, a conservative think tank, blamed the state constitution’s use of the word “estimated.” A balanced budget in Illinois is one that “shall not exceed funds estimated by the General Assembly during that year.” That, in effect, has allowed lawmakers to persistently pass budgets with overly optimistic revenue expectations.

(Adds latest N.J. budget projections in `Kick the Can’ section)

To contact the author of this story:
in New York at bkochkodin@bloomberg.net

To contact the editor responsible for this story:
at dgillen3@bloomberg.net