Metropolitan Life Insurance Co., Massachusetts Institute of Technology, and Anthem Inc. are among the 30 or so defendants that filed settlement paperwork to end Employee Retirement Income Security Act class actions in 2019. 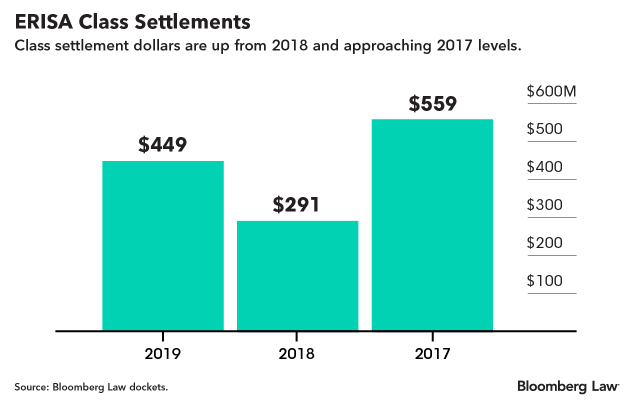 The cumulative dollar value of these deals is much higher than the $291 million negotiated in 2018, but still shy of the $559 million agreed to in 2017.

About half of 2019’s settlements stemmed from lawsuits challenging the fees associated with 401(k)-style retirement plans. These cases, which targeted employers including ABB Inc., Duke University, and Eaton Vance Corp., brought in about $193 million in settlement dollars, with an average deal of about $12 million.

The year’s largest settlements were much bigger and driven by other issues.

And MetLife’s 75 million settlement ended a lawsuit challenging its practice of paying life insurance proceeds in checkbook-style accounts that allowed the company to continue earning interest after distributing benefits.

The deals struck in 2019 largely reflect the typical trajectory of a class action, as opposed to an overarching trend, said Meaghan VerGow, a Washington-based partner with O’Melveny & Myers LLP who defends employers in ERISA suits.

“These suits are often filed in waves, and they tend to shake out in waves,” VerGow told Bloomberg Law.

“The settlements we’ve seen this year are in part a function of the life cycle of the cases that are pending,” she said.

MIT’s $18.1 million deal, announced four days before the school was scheduled to begin trial, is the largest of these, which targeted other top-tier schools like Yale and Columbia.

The five university settlements announced in 2019 may reflect that these lawsuits were filed in a wave, VerGow said.

“There was a wave of university-related litigation in late 2016 and 2017,” VerGow said. “It’s part of the natural life cycle of these cases to have a period of time in which the parties are testing their theories in court, and then to see cases start to settle after the parties have received some feedback from the court.” 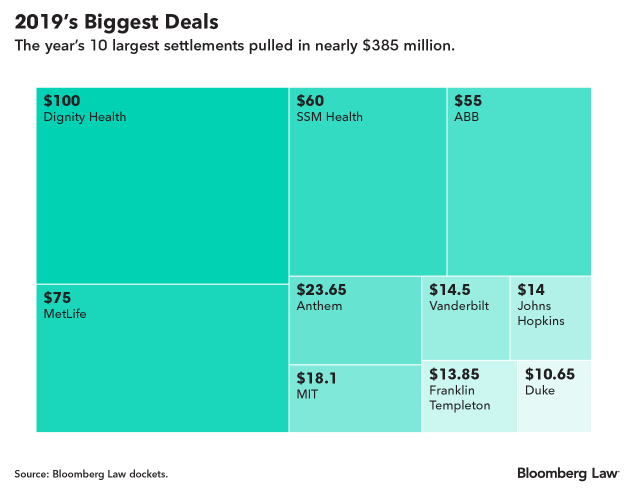 Other plan fee lawsuits targeted financial companies that put their own funds in their employees’ 401(k) plans. Workers say this is a self-interested way to earn extra money off their retirement savings.

These settlement numbers are lower than those seen in 2018, when Deutsche Bank Americas Holding Corp. and BB&T Corp. both agreed to pay more than $20 million to settle similar lawsuits.

In addition to the university lawsuits and the litigation over affiliated mutual funds, seven other cases challenging 401(k) plan fees settled in 2019.

The largest, a $55 million deal signed by ABB Inc., ended a 12-year legal clash that spawned two trips to a federal appeals court and multiple unsuccessful appeals to the U.S. Supreme Court.

Another noteworthy settlement was the $8.75 million deal struck by the trustees of the Supplemental Income Trust Fund. This 401(k) plan covering unionized workers was an unusual defendant in a litigation series that mostly targets large companies and universities.

And Gucci America Inc.‘s $1.2 million class settlement resolved allegations against a plan that held less than $100 million in assets—one of the smallest retirement plans targeted by class litigation.

Litigation against religiously affiliated hospitals that treat their pension plans as ERISA-exempt “church plans” has cooled down since 2017, when the Supreme Court issued a ruling favoring three hospitals.

The lawsuits accuse the hospitals of misusing ERISA’s religious exemption to significantly underfund their pensions.

Before the Supreme Court weighed in, several hospitals had signed nine-figure deals to end these cases, with one hospital agreeing to pay $352 million.

The lower settlements seen in 2019 may stem from a handful of factors, including the greater risk to plaintiffs following the Supreme Court’s decision, said Karen L. Handorf, a Washington-based partner with Cohen Milstein Sellers & Toll PLLC who represents plaintiffs in ERISA class actions.

Dignity Health agreed to pay $100 million to end a church plan lawsuit, although the judge hearing the case has withheld approval until the parties rethink how attorneys’ fees will be paid.

Some of the cases now being settled involve smaller health care systems, in which the pension plans and funding deficits aren’t as large as in earlier cases, Handorf added.

And the remaining defendants may have increased their pension contributions or seen favorable stock market returns, which would lead to less money recovered, she said.

Northrop Grumman Corp., Oracle Corp., and Invesco Holding Co. are all expected to seek approval for ERISA class settlements in early 2020. Each was sued over the fees in its 401(k) plan.

Honeywell International Inc. is expected to file settlement papers in January to end a lawsuit over health coverage for retirees of a Stratford, Conn., plant. The company announced plans to settle four months after the Second Circuit ruled in favor of the retirees.

And at least one more large employer may be eyeing an early 2020 settlement: SunTrust Banks Inc. said it will try mediating a class challenge to its 401(k) fees out of court. The mediation is scheduled for Jan. 7.