Democrats struck a deal to negotiate with drugmakers on the price of medicines Tuesday, potentially delivering a major campaign promise of President Joe Biden’s by targeting the highest price drugs that have emerged from patent protections.

Under the agreement, the government would negotiate for lower prices on 10 drugs that rank among those that cost Medicare the most each year, starting in 2023, according to Finance Committee Chairman (D-Ore.). That number would ramp up to 20 in subsequent years, he said.

The proposal would also require drugmakers to pay back to the government any profits made from increasing the price of their products past inflation starting in 2022. This would apply to price hikes on Medicare and on employer-sponsored plans, Wyden said.

The landmark deal would empower Medicare, the government insurance plan for those 65 and older, to negotiate with drugmakers on prices for the first time. But in order to win over party holdouts, the negotiations would apply to a narrower set of drugs than House Democrats originally proposed.

The Health and Human Services Department would select the drugs from a list of the highest gross spending products in both Medicare Part B, the outpatient benefit, and Part D, the medicines provided to beneficiaries through a pharmacy. Only drugs outside their initial patent exclusivity period would be subject to price negotiation, Wyden said. 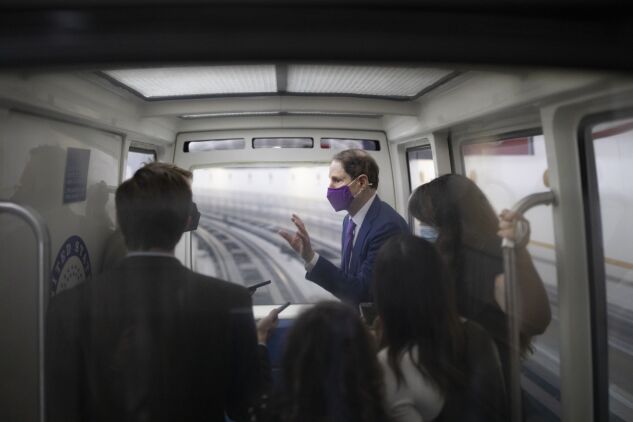 Maintaining a government-granted exclusivity period was crucial to winning over opponents of Democrats’ original drug pricing proposal, which would’ve subjected hundreds of drugs to negotiation each year.

Rep. (D-Calif.) said the key for him and others like Sen. (D-Ariz.) was ensuring pharmaceutical companies could still count on private investment in new medicines. Previous drug price negotiations were largely aimed at lowering the cost of drugs with patent exclusive rights.

“You have to get that return on investment or you’re not going to see the billions of dollars, tens of billions, in investments in innovation,” Peters said.

It would put a $2,000 annual cap on what Medicare beneficiaries spend on medicines each year and redesign the benefit to put more costs on drugmakers.

Sinema, a key vote in the 50-50 Senate, said she agrees on the proposed plan.

Group of senators including Sinema have been talking with Democratic leaders since the weekend about targeting negotiations to “market failures” and away from innovative products, Sen. (D-Conn.) said Tuesday.

“The White House and Senator Wyden, they worked with her to really target where there’s been a failure, where drugs have gone beyond their patent and still have these high costs,” Murphy said.

Sinema repeatedly warned her colleagues she was worried about harming the investment market for pharmaceuticals and needed to preserve pricing power of new drugs, Murphy said. The goal was finding a place where Democrats could lower drug prices for seniors and open the door for government negotiation while meeting these demands, he said.

“The space that has been carved our in this bill is substantial, where there’s a lot of high cost drugs,” Murphy said. “This isn’t a fig leaf.”

The proposal also includes special rules for small biotechnology companies. It would exempt from negotiations all drugs that contribute less than $200 million to Medicare spending and the products of any company where one drug makes up 80% or more of its Medicare revenue but constitutes less than 1% of the total Medicare spending.

To contact the editors responsible for this story: at fjohnson@bloombergindustry.com; at hrothman@bgov.com