The Office of the U.S. Trade Representative has granted none of the 11,675 requests for relief from stiff tariffs on Chinese imports, and it has denied almost 1,500 of them, according to a Bloomberg Law analysis of data released Dec. 7.

Caterpillar, General Motors, Procter & Gamble, GE Appliances, Stanley Black and Decker, Tesla, and Whirlpool are among the companies that have submitted requests to be excluded from tariffs on $50 billion worth of Chinese goods.

Manufacturers, importers, and their political allies are complaining months-long delays have caused billions in lost revenues and uncertainty, with small and mid-sized companies impacted the most.

No process is yet in place for challenging what’s on the third and most extensive products list, totaling $200 billion, that includes hats, food, leather handbags, cameras, clothing, glassware, and other items suitable for gift-giving this season.

USTR didn’t immediately respond to a request for comment.

The absence of approvals has made it difficult to figure out what would pass muster for an exemption, trade attorney Stephen Kho, of Akin Gump, told Bloomberg Law. “Companies are wondering whether it’s even worth it” to file, he said.

In examining requests, USTR has said it may consider whether a product is available from a non-China source, whether additional duties would cause severe economic harm to the requester or U.S. interests, and whether the product is strategically important or related to Chinese industrial programs.

The exclusion process should be scrapped along with the tariffs, Freedom Partners spokesman Kevin Schweers told Bloomberg Law. Such tariffs allow Washington to micromanage trade and any exemption process tips the scales by picking winners and losers, he said in an email. Freedom Partners is a nonprofit that promotes the benefits of free markets.

Commerce reviews requests from companies. If one company requests an exemption for steel rods, its competitors would also have to file a separate request.

In contrast, a USTR exemption applies only to products. A request to exempt certain kinds of nails, for example, would include all such products regardless of company, according to USTR.

A comparison of the Commerce and USTR processes showed that Commerce issued 1,460 approvals of requests for steel tariff exemptions within 100 business days of the first filing, compared to USTR’s zero approval rate since the tariffs began in July.

What’s more, the administration has resisted pressure to establish an exclusion process for the third and most extensive products list, totaling $200 billion.

“Our members are really chomping at the bit to get an exclusion process for list three,” Ed Brzytwa, American Chemistry Council director of international trade, told Bloomberg Law. “List three is so massive that USTR as an agency is not capable of dealing with the thousands and thousands of requests,” he said, adding that USTR also wants to keep maximum pressure on China. 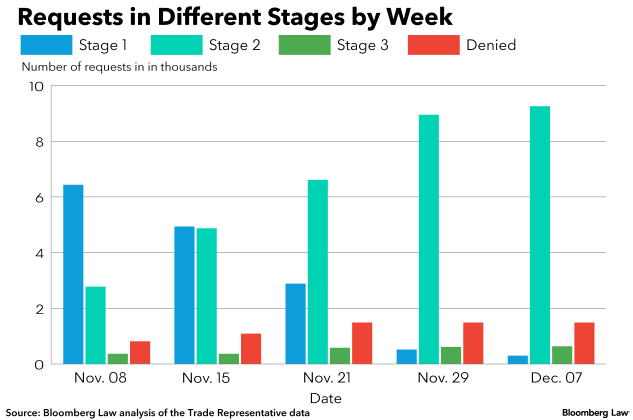 The 25 percent tariff took effect on a list of goods worth $34 billion in July, and on another $16 billion worth of goods in August. Deadlines for requesting tariff exemptions for products on the two lists are Oct. 9 and Dec. 18, 2018.

The vast majority of the total 11,675 requests are in the initial review phase, according to the latest data released Dec. 7 by USTR. Of the total, 635 are in the third phase, where USTR and Customs and Border Patrol decide if the CBP would be able to enforce an exclusion.

The four-stage reviews start after USTR determines the request form is complete. It begins with a comment period for requests posted on Regulations.gov, followed by USTR’s determination whether to grant approvals and then the USTR-CBP consultations. The final step is approval.

A boost in requests during the second phase may indicate progress, although the comment period doesn’t require agency action. Requests move automatically from the first to second stage when the period closes.

With assistance from Christina Brady and Laura Gordon-Murnane.