Significantly increasing the numbers of Black, Latino and other underrepresented workers means not just bringing in new people, but keeping the ones you have. For employers, that’s going to mean addressing burnout in a way they never have before.

At Bain & Co., one of 40 companies that has pledged to collectively hire and promote one million Black Americans in the next 10 years, burnout “is a real factor across populations,” said Julie Coffman, the consulting firm’s chief diversity officer, “but is maybe most acute in our Black and brown populations.”

The pandemic year has been mentally harrowing for all, but against the backdrop of and endless viral police shootings, Black workers are reporting higher rates of burnout and depression compared to other groups. A McKinsey & Co. survey of 40,000 workers last summer found Black women recorded among the highest levels of exhaustion and burnout. In a March Society of Human Resource Management survey, over a third of Black, Indigenous and people of color said they sometimes felt down, depressed and hopeless compared to 26% of White respondents.

For some, like Jane Grant, the mental toll has pushed them out of the workplace altogether. Grant, 28, left her job as a physical therapist at a big health care provider last year after “multiple instances of microagressions” and pay that she felt didn’t reflect her performance. All that was compounded by the trauma of Black death around her. “You’re watching people be shot down, be killed and all these horrible graphic things that we’re not meant to constantly take in,” she said. “Those things play on your mental health.” She now runs her own business selling medicinal herbs and providing wellness services like Reiki.

Since last summer’s Black Lives Matter protests, more than 80 of the biggest public companies in the U.S. have . Historically, one of the biggest hurdles to improving diversity has been attrition. Even before the pandemic, studies found Black employees were more likely to leave their workplaces than White ones, and were more likely to say they don’t feel respected or valued. The stresses of the last year have only made things worse. One in three Black women are looking to downshift their careers or leave the workforce, compared to one in four women overall and one in five men overall, a McKinsey survey conducted over the summer found.

“I’m deeply worried that the risk of departure in the places where we most need representation will be quite high, driven by this exhaustion and burnout,” said Sara Prince, an Atlanta-based partner at McKinsey.

To attempt to stem the tide, employers have beefed up mental health offerings and created programming specifically for Black employees. Bain last month held a large virtual summit for its Black employee resource group and will give all workers the Friday before Memorial Day and the Fourth of July off. Carlyle Group Inc., which has tied executive pay to meeting diversity goals, trained managers on how to specifically check in with Black employees on how best to support them and hosted forums for minority workers to talk about the stresses of current events. Carlyle will also shut down for one week in August. The chief executive of Poshmark Inc., Manish Chandra, said as the anniversary of George Floyd’s murder approaches, mental health is “definitely a core concern,” and gave all workers a mental health day this month. 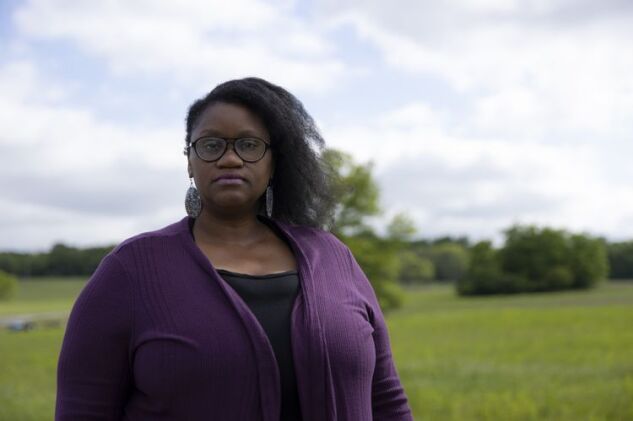 Tonya Abari in Nashville, on May 10.
Photographer: Brett Carlsen/Bloomberg

Despite an increased emphasis on employee mental health, interviews with a dozen Black workers across the U.S. suggest employers haven’t done enough to deal with experiences particular to Black workers. “I don’t think that jobs and society account for us having to process these things,” said Tonya Abari, a freelance writer who has cut back on work this year. Many of the workers Bloomberg spoke with are crumbling under the added stresses of the last year, which included losing loved ones to Covid and worrying about police encounters. Eight had left their jobs in the last year to start their own businesses or look for new opportunities.

“People are taking sabbaticals, they’re on sick leave,” said Rachel Montanez, a career coach based in central Florida, who says she’s seen an uptick in Black, Asian and mixed race workers experiencing burnout. “The burden has become so intense.”

The approach to supporting employee mental health should take employees different backgrounds and experiences into account, experts say. Companies that ignore the issues Black employees face or that shy away from talking about “” issues risk alienating underrepresented workers, said Montanez. But even those with a barrage of programming and resources could do more to encourage participation. Washington-based recruiter Danisha Martin at Nonprofit HR says the most successful workplaces ask what their employees need.

These efforts should also be accompanied by a fair and welcoming workplace. If Black employees feel sidelined in meetings or stunted on their career path, a statement on equity from an executive or an invite to a race-focused town hall likely won’t do much to keep them around in the long run.

“It’s not enough just to hire diverse talent,” Hilton Worldwide Holdings Inc. chief human resources officer Laura Fuentes said in an email. “If you don’t create an environment where team members are welcome to bring their whole selves to work—to truly be themselves—and feel like they are valued and that they belong, then they will go somewhere else.”