Many chief executive officers at U.S. companies are paid too much -- and investors aren’t holding corporate boards accountable, a senior official at the country’s largest public pension fund said.

The too-generous compensation happens despite talk that executive pay is linked to performance, said , head of corporate governance at the $389-billion , which has taken action on the issue: In the first half of the year, it cast votes against pay plans at 1,165 firms, or 52% of portfolio companies that held votes. 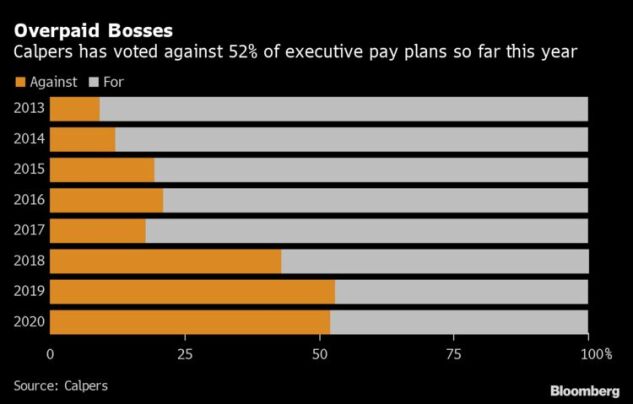 The numbers are rare in the world of asset management, where big investors rarely dissent on such matters. Its voting record makes Calpers one of the most adversarial institutional investors when it comes to executive compensation.

Advisory investor votes on executive compensation at publicly traded companies were introduced in 2011 in part to rein in excessive packages. And even though CEO pay in most industries has continued to rise since then, only a handful of companies each year receive less than 50% approval for their pay plans, with most getting more than 90%.

“The stats are there,” Nzima said. The broader investor community spends “a lot of time decrying bad pay-for-performance. But the voting record hasn’t reflected that.”

Calpers’ votes are based on an analysis of executives’ realizable compensation, which measures how a pay package grows or shrinks in value depending on whether goals are achieved and how the shares move, relative to the company’s stock return over five years. It then compares those figures with companies of similar size or type.

The pension also voted against 2,716 directors who sit on compensation committees and are responsible for setting executive pay.

“You have to believe they know they’re overpaying but not doing anything about it, or that they don’t realize it and someone has to tell them,” Nzima said in an interview.

While the say-on-pay vote is merely advisory, votes against directors can be embarrassing and be fodder for activist investors seeking to argue that the company’s leadership is out of touch with shareholders.

The fund also engages with companies on topics like climate change and boardroom diversity.

To contact the reporter on this story:
in New York at amelin3@bloomberg.net