Dave Stewart #34 of the Oakland Athletics pitches during a game in the 1989 season at Oakland-Alameda Coliseum in Oakland, Calif.
Photographer: Otto Greule Jr./Getty Images

From a tax perspective, the city of Nashville might have the edge when it comes to fielding a new baseball team in the future—but Tennessee should tread carefully, says tax and technology attorney Andrew Leahey.

Dave “Smoke” Stewart accumulated 168 wins across 523 games in 16 seasons pitching in Major League Baseball (MLB). If Smoke has his druthers, he will be able to add “bringing baseball to Tennessee” to that impressive resume. Stewart is championing calls to consider Nashville as the location of the next expansion team, something MLB hasn’t done since the Tampa Bay Devil Rays (now the Tampa Bay Rays) and the Arizona Diamondbacks were added in 1998.

Nashville isn’t the only city hoping to field a team in the future. When the Expos moved from Montreal to the D.C. area, Arlington, Va., had some hopes to land the team. Similarly, in Florida, Orlando had hopes in 1998 when Phoenix and Tampa Bay made the cut. Building a facility is famously not a cheap endeavor for the city that plays host, but nonetheless, cities seem to be vying for an opportunity to spend.

From a tax perspective, Nashville might have the edge—but Tennessee should tread carefully.

Tennessee is one of seven states with no income tax. Of course, the Volunteer State has a combined state and average local of 9.55% sales tax—so perhaps concession stand operators might volunteer a different location—but players and highly compensated executives will be pleased.

Max Scherzer is the most highly compensated player for 2022, at $43 million and some change. In Virginia, that would cost him nearly $2.5 million in state income tax, assuming he would immediately take up residence in Virginia upon becoming the ace of the Virginia Opossums’ pitching staff—I’m pitching that as the name they’d have to adopt.

Now the rub here is that Scherzer is already pitching in New York, which has an even higher state income tax than Virginia. So the fact that the rosters of the New York and California teams are not entirely devoid of players would suggest, much to our chagrin, that the income tax rate is not dispositive when it comes time to sign a contract. 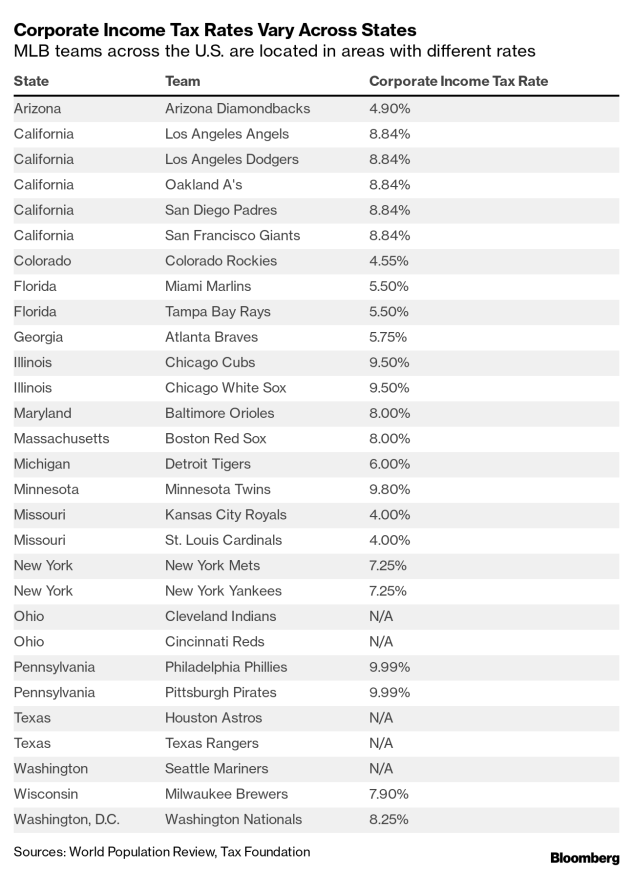 The Tennessee property tax rate of 0.63% is about half that of New York and about 25% lower than Florida. Because Scherzer is being compelled to move to Tennessee for the purposes of this article, we may as well also dictate to him what kind of home he will be building. It’s going to be large. Derek Jeter previously owned a 30,875-square-foot Florida estate nicknamed St. Jetersburg, and Scherzer doesn’t want to be outdone. Knocking 25% off the cost of the land Castle Scherzerville stands on might be all the incentive necessary to draw the ace.

Similarly, the sports complex, while traditionally benefiting from abatements for many years following construction, will eventually be more able to pay its fair share to the community it sits in.

Not exactly a tax in the traditional sense, cost of living, or COL, encompasses things like grocery costs, housing costs (which does include property tax), utilities, transportation and churns out an index. It is worth noting that COL indexes consistently rank Tennessee well in terms of maintaining a low cost of living—in 2021, they ranked sixth.

What Tennessee Can Do to Tip the Scales

Sports complexes and stadiums are frequently funded by tax-exempt municipal bonds. These bonds have marginal rates of return, but those interest payments are tax-exempt for the holders. This makes them an attractive method of financing public improvements without breaking the municipal bank. When they’re used for sports venues, however, some can be left wondering if the funds could be made better use of in the communities disrupted by construction.

The argument in favor of using these “private activity” bonds to fund sports complexes is, of course, that it brings economic and social value to the community. However, it is often the case that these sports complexes sit right next to, or within, the most economically disadvantaged portions of a metropolitan area. It is an open question if it’s a net negative or a net positive. But regardless, it is in the best financial interest of a state and municipality not to fund construction if everything else is equal—that is, if the team will still come.

The problem is, there is little that Nashville can offer if it wants to hold the line on issuing tax-exempt financing for the facilities; in this case, the problem suggests the answer. If Tennessee wants a fair shake at competing to sustainably and equitably play host to the next MLB expansion team, every effort should be made to support bills like the No Tax Subsidies for Stadiums Act of 2022, introduced in the House in February.

The average MLB team is valued at just over $2 billion; it’s a profitable enterprise that is not in need of a stimulus on the backs of working Tennesseans. If you listen carefully to the wind moving through the Tennessee corn fields, you can hear them: “If you don’t build it, they will still come (if you pass the No Tax Subsidies for Stadiums Act of 2022).”

Andrew Leahey is a tax and technology attorney in Pennsylvania and New Jersey.