President Donald Trump's motorcade headed to Capitol Hill on March 10 for a meeting with Senate Republicans about the administration's response to coronavirus.
Photographer: Kevin Dietsch/UPI/Bloomberg

told Republican senators on Tuesday that he wants a payroll tax holiday through the November election so that taxes don’t go back up before voters decide whether to return him to office, according to three people familiar with the president’s remarks.

Trump spoke to the Republicans at their weekly conference lunch at the Capitol as his administration prepares a package of economic measures to combat the fallout from the coronavirus outbreak. But the administration does not have a particularly detailed plan, several Republicans said including of South Dakota.

“Until we have a little bit more of an idea of what it is exactly they’re asking for, it’s hard to react quite yet,” Thune said.

House Speaker said after a meeting with Treasury Secretary she called “pleasant” that she and the White House would “exchange further information.”

“We know more needs to be done,” she said. She said Democrats have prepared legislation but they’re seeking budget estimates and the advice of legislative counsel and declined to provide a timeline to advance it.

Trump said Monday that he would announce “substantial” economic measures in a Tuesday news conference to combat the virus, a statement that dismayed some of his aides because details of such a plan are still under discussion. Democrats have expressed reluctance about a tax cut to address the economic impact of coronavirus and several Republican senators also held back from endorsing the idea before Trump’s visit to the capitol.

“What we are doing has to be related to the coronavirus,” Pelosi said.

Senate Democratic leader said the government should focus on guaranteeing paid sick leave for workers who are infected and extending unemployment insurance for people put out of work. 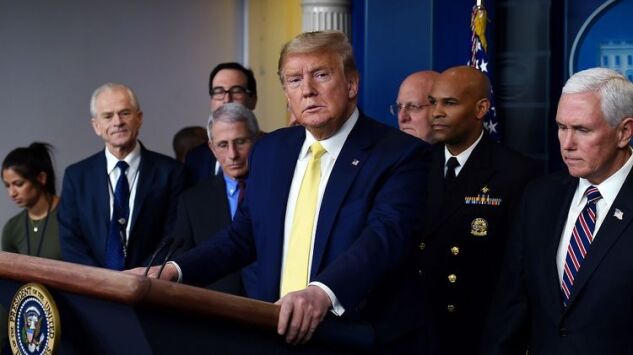 Trump also pitched Republican senators on economic relief for the travel and hospitality industries, which have been hard-hit by coronavirus-related cancellations, said Senator .

Graham, a South Carolina Republican, said reaction to the idea of waiving payroll taxes was “mixed.”

Most of the payroll tax funds Social Security, with employees and employers each paying 6.2% on wages up to $137,700. Another 1.45% is paid to fund Medicare.

The cost of a payroll tax cut or holiday would depend on how much of the tax is rolled back and for how long. A 2 percentage point cut for employees, as President signed at the end of 2010, would cost $150 billion in government revenue over a year and $300 billion if the employer portion also was cut.

“The payroll tax, as a general stimulus -- I’ve got to think about that,” Graham said.

Graham said that his colleagues of North Dakota and of Oklahoma suggested a federal bailout for the shale drilling industry, which is under sudden stress due to an oil price war between Saudi Arabia and Russia.

Thune said the shale issue was “one of many” that came up during the meeting. “I don’t know at this point if that will be in any final package,” he said.

After the meeting, the Republicans were largely in agreement that some sort of economic stimulus is necessary.

“Our economy is going to take a hit,” said Senator John Kennedy, a Louisiana Republican. “You don’t have to be a senior at Cal Tech to figure that out. The world economy’s going to take a hit. It won’t be a permanent hit. But we don’t know how much.”

Kennedy defended the Federal Reserve, which the president has harshly criticized this week even after the central bank issued an emergency half-point cut in interest rates to stave off a coronavirus-related slowdown.

“I do not think just cutting interest rates is going to do it,” Kennedy said. “I don’t think doing this on the monetary side will succeed. We’re going to have to do it on the fiscal side as well.”

Senator of Alaska said that a payroll tax holiday should be paid for because it would otherwise weaken Social Security. Payroll deductions finance the trust funds that support both the retirement program and Medicare, the health program for the elderly and disabled.

Senator described coronavirus as presenting a potential “economic 9/11” to the country, a day after he expressed skepticism about passing stimulus measures. Cornyn said that Senator of Wyoming suggested an infrastructure bill to Trump and the president was receptive.

If lawmakers “don’t get ahead of it you’re going to see unemployment rise,” Cornyn said, justifying a payroll tax cut.

(Updates with Thune and Pelosi remarks. An earlier version of this story corrected the spelling of Senator John Barrasso’s name.)

To contact the reporter on this story:
in Washington at jjacobs68@bloomberg.net