The Biden administration FY 2022 Budget proposal includes $2.4 trillion of additional revenue over the next 10 years. Higher tax rates on high-income individuals and corporations account for $990 billion. At the same time, the budget proposes $1.35 trillion of new tax expenditures from exemptions, exclusions, and deductions. A sound scrutiny of new and existing tax expenditures’ cost-effectiveness as well as their potential economic effects is hence vital.

Tax expenditures are special provisions of the tax code that reduce tax liabilities for specific activities or groups of taxpayers in order to pursue different policy goals. The federal government uses tax expenditures such as special deductions, exemptions, and reduced rates to run different subsidy and incentive programs with the aim of supporting specific sectors or social groups.

According to the Treasury, every year, the federal government forgoes roughly $1.5 trillion through the implementation of income-related tax expenditures. That is equivalent to 6.8% of GDP and more than one-third of federal government spending. The top five income-related tax expenditure provisions account for more than 40% of the total (Figure 1). 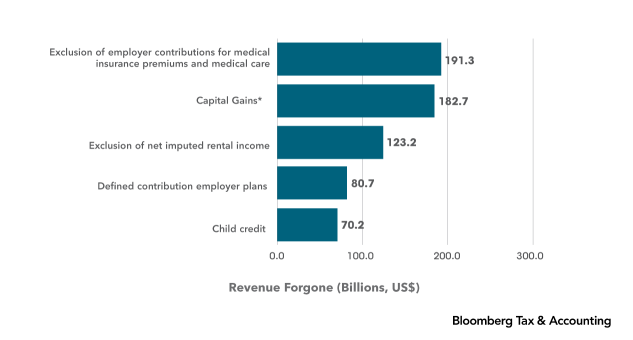 Unlike the rest of the G-7 economies, tax expenditure reports by both the Treasury and the Joint Committee on Taxation only report revenue forgone estimates related to income taxes. The cost of tax expenditures related to other federal taxes—such as payroll taxes, excise taxes, as well as estate and gift taxes—are not included in these annual reports. Hence the overall figures provided above should be seen as a lower bound.

According to the newly released Global Tax Expenditures Database, the fiscal cost of tax expenditures in the U.S. is significantly higher than the average in the OECD (4.4% of GDP) and worldwide (3.7% of GDP) (Figure 2). Given that the U.S. numbers only capture those related to income taxes, the difference is likely to be even higher. 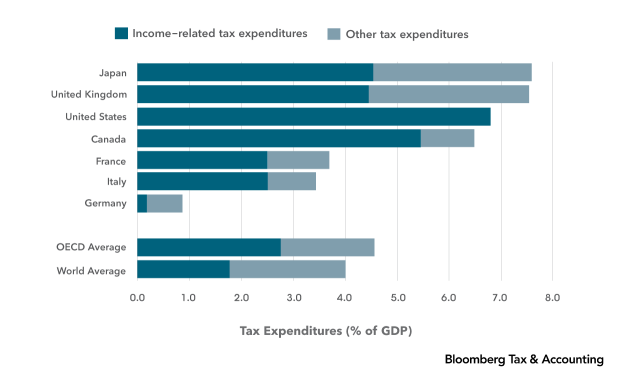 Tax Expenditures Can Be Ineffective and Trigger Negative Side Effects

Besides their fiscal cost, many tax expenditure provisions do not achieve their stated goals and can trigger negative side effects such as exacerbating inequality. For instance, as often the case with individual income tax expenditures, housing-related tax expenditure provisions are highly regressive. In the U.S., several housing-related costs—such as mortgage interest payments—are deductible from taxable income. Yet, evidence for the U.S. and other countries indicates that mortgage interest deduction (MID) provisions have little, if any, impact on homeownership rates. And they can have a significant impact on public coffers. During the next 10 years, revenue forgone from MID is estimated at $600 billion in the U.S.

The exclusion from taxable income of capital gains from the sale of a principal residence is estimated to add a further loss of federal revenue during that period of $500 billion . Moreover, the distribution of these tax benefits is highly skewed towards top income earners. The Tax Policy Center estimates that, while just over 8% of all tax units benefit from the MID, more than 60% do so among the top 1% in the income distribution.

Now, tax expenditures are not bad per se. For instance, the earned income tax credit (EITC), a refundable tax credit that subsidizes low-income working families, has been proven to encourage single people—particularly women— and primary earners in married couples to work. It also has a positive long-term effect on children’s education and employment outcomes.

Biden’s proposal includes repealing several tax expenditures, such as removing fossil fuel tax preferences, taxing long-term capital gains, and dividends at ordinary tax rates, taxing capital gains as realizations at transfer or death, and eliminating like-kind exchange deferrals. These measures are estimated to increase tax revenue by $440 billion. On the other hand, new and expanded tax expenditures would reduce federal revenues by $1.35 trillion over the next 10 years.

The largest expansion is in the area of support for workers and families totaling $822 billion, with the largest provision being extending the child tax credit increase through 2025 and making permanent the credit’s full refundability costing $449 billion. Likewise, new, extended, and expanded alternative energy incentives total $349 billion, while enhanced R&D incentives total $124 billion, and support for housing and infrastructure total $61 billion over 10 years.

Interestingly, almost 90% of the expanded tax expenditures—$1.2 trillion—will occur through outlays, rather than reduced tax collection, due to refundable tax credits. This shows that tax expenditures are no different than direct payments of grants or transfers, where checks are sent to recipients.

Indeed, a big part of the goals in Biden’s “Made in America Tax Plan” are changes to tax expenditures pursuing policy objectives such as “fixing the corporate tax code so that it incentivizes job creation and investment here in the United States, …[and] eliminating tax preferences for fossil fuels as part of the President’s commitment to put the country on a path to net-zero emissions by 2050.“ Thus, the effectiveness of the budget proposal affecting the tax expenditure system will, to a large extent, determine the success of the Biden administration in reaching their goals.

This column doesn’t necessarily reflect the opinion of The Bureau of National Affairs Inc. or its owners.