President Joe Biden is having a tough time of it. Few would disagree that he is in serious political difficulties at present. But the stock market, always taken as a critical validator and benchmark by his predecessor, is going gangbusters under his leadership. It’s interesting to explain why.

This is how the S&P 500 has moved from the first day of trading in the first year of the last six presidencies. With a gain of more than 20%, the S&P has now done better under Biden than it had at the same stage under any of his predecessors since George H.W. Bush: 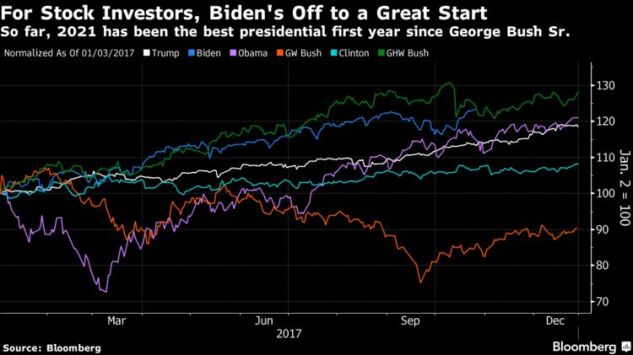 There are lots of reasons for a stock market to rise or fall, of course. George W. Bush took over just as a bubble had burst, and then the 9/11 terrorist attacks happened, so it’s hard to say that anything he did was behind the S&P’s 10% fall during his first year. Others were luckier in their timing.

If there is one single reason why the stock market is doing quite so well under Biden amid the unhappiness and dissension of 2021, it is earnings. It’s no surprise that profits are improving compared to 2020. But it’s turned out in each quarter that brokers and their analysts had underestimated the scale of the rebound. Forecasts for the full year have surged at a remarkable rate. This is how estimated earnings, as calculated by Bloomberg, have risen so far this year, compared to 2017, the first year of Donald Trump: 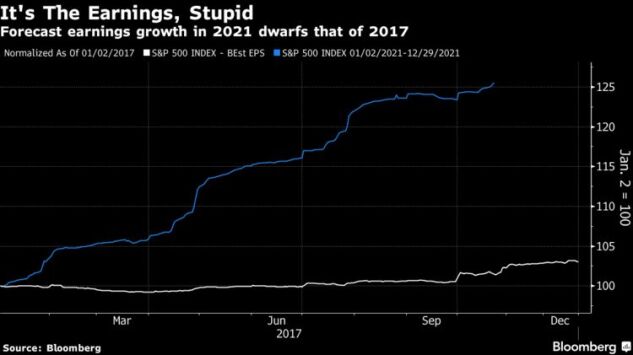 Neither president has much to do with either of these numbers. And there is no great increase in animal spirits under Biden. Price-earnings ratios, on a prospective or historic basis, have fallen slightly so far this year.

However, there is at least one way in which markets are directly sensitive to the president, and where it’s possible to draw a very direct comparison with Trump. It isn’t a comfortable one for Biden.

Trump arrived with a mandate to cut corporate taxes, just as Biden arrived with a mandate to reverse those cuts. There is room for all kinds of argument about whether lower corporate taxes are a good idea in the long run. In the short run, there is no question that markets like them. Tax cuts are also most beneficial for those companies that are less able to benefit from loopholes and thus pay a higher effective tax rate.

Handily, Goldman Sachs Group Inc. keeps baskets of the U.S. stocks with the highest and lowest effective tax rates, which it makes available on the Bloomberg terminal. This is how the high-tax basket (of stocks that stand to benefit most from a tax cut) has performed relative to the low-tax basket since Trump was elected on Nov. 8, 2016: 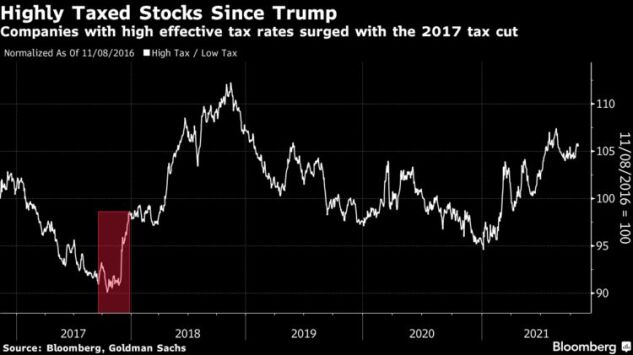 It might come as a surprise now that we know how 2017 ended, but the highly taxed stocks did really badly in the first months of Trump. This was because his start in office involved a number of serious failures to get things done. By September, when the Trump tax plan was at last published, a significant cut appeared almost out of the question. Then, in a flurry of legislative action, Republicans managed to coalesce around a proposal in late November, and high-taxed companies’ shares surged. They gained much more in 2018 as the scale of the government’s generosity became apparent.

So the fall in high-taxed stocks showed initial lack of faith in Trump to get his agenda done. That’s sad for Biden because high-taxed stocks have been doing fantastically so far this year, which clearly implies that the market has never believed that a big hike is coming: 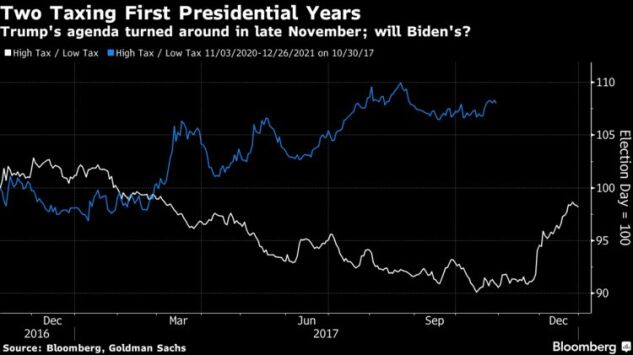 We are getting to the time of year when Republicans in Congress finally pulled themselves together and delivered a victory for their president (and their party). It’s not that unusual for big complicated legislation to take a long time to take shape, or for recalcitrant voters to fall into line only at the last moment. This was something that investors should have grasped more clearly in the summer and early fall of 2017. Will Democrats pull together behind Biden in the same way this year?

It looks very much as though they won’t, at least on the extremely market-sensitive issue of corporate tax. Late last week there was a slew of stories that Senator Kyrsten Sinema of Arizona would not support a corporate tax hike in any circumstances. As there are only 50 Democrats in the Senate, this essentially doomed the initiative. Subsequent briefings suggested that a hike was off the table.

It’s always possible that Sinema, who has been Delphic throughout the process, is merely taking a negotiating stance. But the cheerful political geeks who bet money on the Predictit futures exchange, as good a measure as any of conventional wisdom in real time, think the odds turned decisively last week: 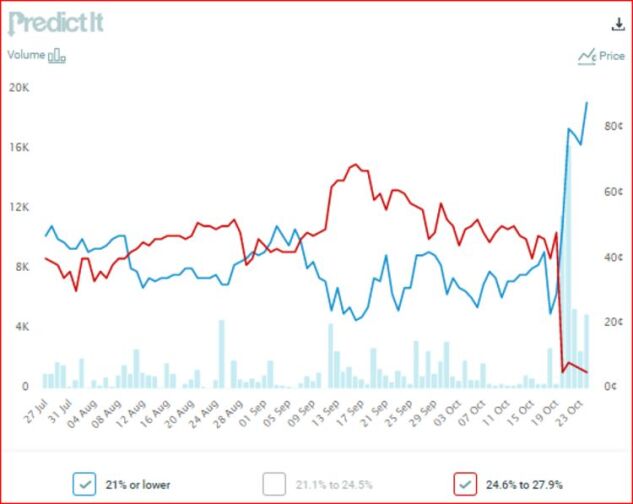 The market’s rise to date this year reflects a serious lack of confidence in the Biden administration to deliver on tax hikes. The latest political news is therefore rather good for the stock market. But a fiscal boost along the lines of the “Blue Wave” narrative that propped up the market very nicely ahead of last year’s election, and again after the Democrats’ surprising victory in two Georgia seats gave them control of the Senate, is still something the market wants. Without some big new spending package, there is an unpalatable “fiscal cliff” coming next year, as people learn to live without pandemic emergency assistance.

So far, not getting things done has worked well for Biden in the markets. It’s a strategy that will soon stop working if Democrats aren’t careful.

The latest inflation indicators have been updated, and you can see them . The heat map follows below. As a reminder — each of the 35 rectangles is a different indicator, and they are colored according to how far above or below average they are compared to the last 10 years. The bluer the rectangle, the more the reading is above the norm of the last decade (when inflation was very much under control). The heat map continues to get bluer, most recently because markets themselves are now beginning to signal an expectation that inflation will keep rising: 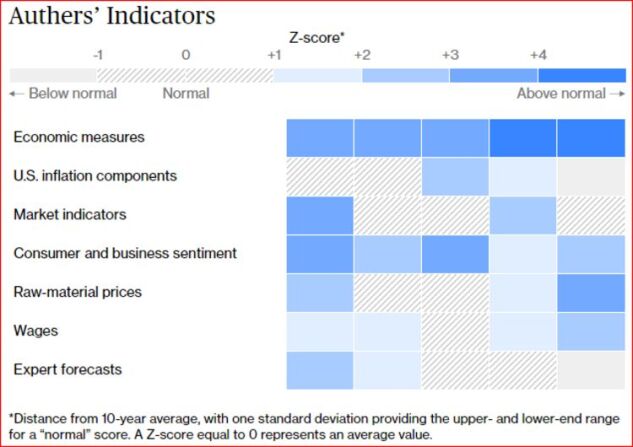 It’s worth looking at the indicators that don’t indicate a serious problem. One will come as great news to many, which is that . Counterintuitively, indicators that suggest we have little to worry about include fuel and food, as measured by the Bloomberg commodity sub-indexes for energy and agriculture. This is how the year-on-year change in those indexes has moved over the last 10 years: 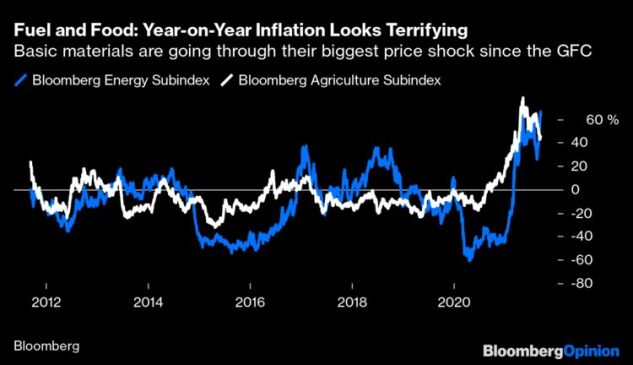 In terms of the change with which consumers and industries have to deal, these are big shocks — plainly the biggest rises for both fuel and food of the last decade. But neither shows up as an alarming indicator at the heat map. That’s because the indicators are based on the level of these prices, rather than their year-on-year change. And the level of both fuel and food prices is unremarkable by the standards of the last decade. Back in 2011, a long commodity bull market was just peaking and beginning a long descent. It looks very much as though we are in a new commodity bull market, but the actual level of prices is still unremarkable, and far lower than it was 10 years ago: 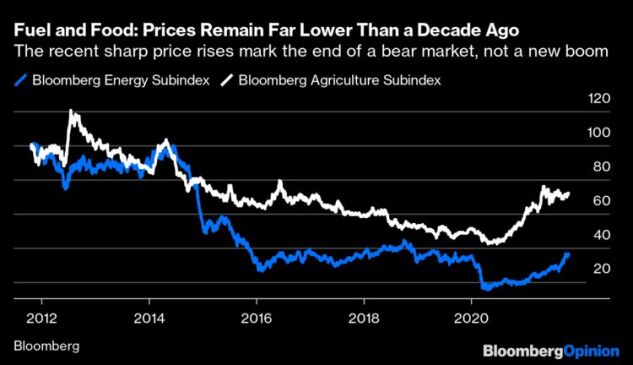 You can argue whether rates of change or levels are more relevant, but it remains important that prices of some basic commodities are still nowhere near their highs.

The other indicators that look resolutely calm are the projections by economists polled by Bloomberg. As 2021 is now almost in the books, and the debate has moved on from whether this dose of inflation is transitory to asking exactly how long and how bad the episode could be, it’s useful to look at forecasts for 2023. Economists remain very confident that there won’t be particularly elevated inflation anywhere: 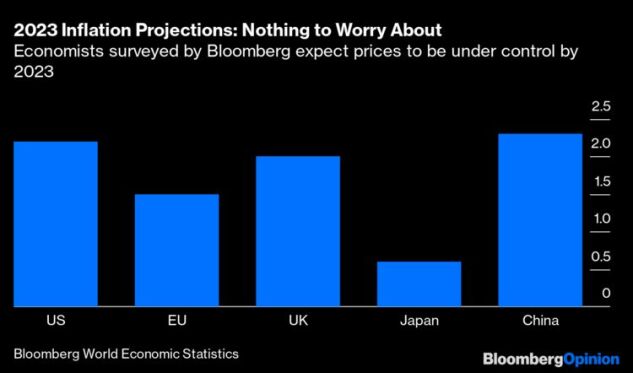 There is, of course, a lot of skepticism toward economists these days. But they have access to a lot of data and a big incentive to get it right, and their estimates are incorporated into business plans. Over time, they tend to be more accurate than anyone else (although still not terribly accurate) at forecasting inflation.

The market has been oddly slow to grasp that this inflationary episode was more than a blip. It’s still not at all clear how bad it could get. It’s also not clear what central banks will do, and whether conventional monetary policy will work on a rise in inflation that appears to be driven by bottlenecks in supply. The debate is growing ever more complicated.

Tesla Inc. has completed its trip to the moon, or at least it has reached a market value of $1 trillion. Barely 11 years after it went public, this isn’t at all bad. This is how Tesla’s share price has performed compared to the main indexes for European and Japanese carmakers since its IPO: 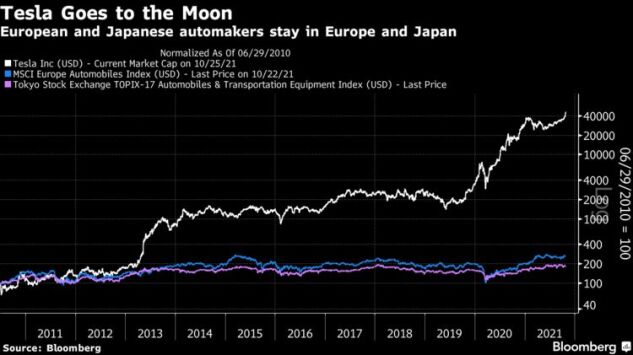 This may or may not make sense. It’s plainly an exciting company, and there are conceivable futures in which Tesla’s current share price will appear to be reasonable. I don’t know how to put a probability on reaching that future, and my gut is that the chances are slim, but it’s possible. Compare Tesla’s valuation with the rest of the global automaking sector, however, and it’s obvious that something is wrong. 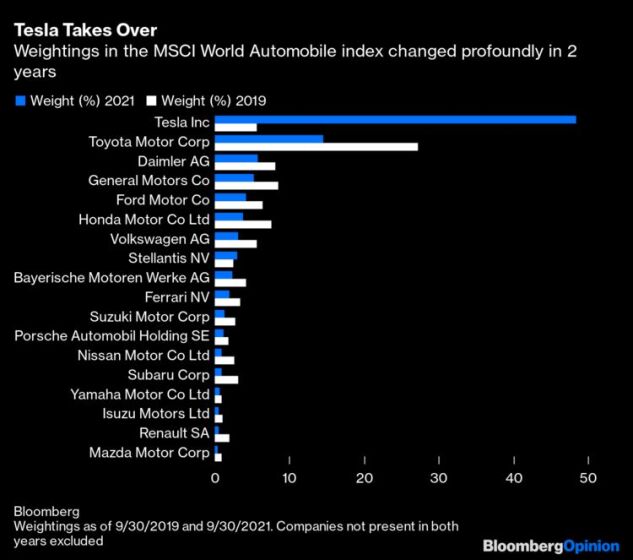 So Tesla’s growth has massively displaced many big and well-established carmakers around the world. But this displacement is only relative. The value of other major automakers such as Toyota Motor Corp. and Volkswagen AG has also grown. This is how Tesla’s market cap compared with the rest of the MSCI World automakers sub-index at the end of September this year, and on the same dates in 2019 and 2020: 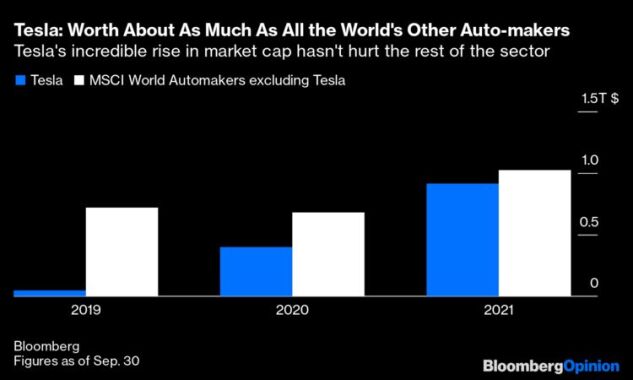 While Tesla’s market cap has grown by almost $1 trillion in those two years, then, the rest of the world’s big automakers have somehow added $310 billion of value.

Maybe we’re going to junk all our current cars, Tesla is going to sell us half of our electric vehicles and existing manufacturers will sell us the other half. Or maybe we’re all going to buy an EV, but continue to replace our conventional cars as well. Or maybe the market is based on an internal illogicality.

The last explanation seems best to me. If you’ve done your homework and you’re confident that Tesla is worth $1 trillion (it might be), then there’s money to be made shorting a lot of other manufacturers.

World Wombat Day is over for another year, but wombats still merit your attention. I mentioned Wombat Stew yesterday, which my kids used to love, but I forgot to mention Willie the Wombat. 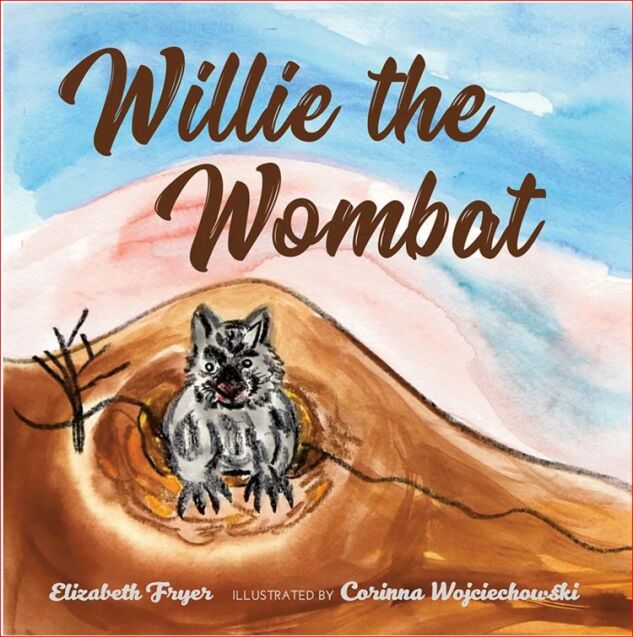 (Corrects the second chart in the Tesla section to fix transposed keys.)

To contact the author of this story:
John Authers at jauthers@bloomberg.net

To contact the editor responsible for this story:
Matthew Brooker at mbrooker1@bloomberg.net