Legislative sessions are still getting started, but already bills have been introduced in Connecticut, Indiana, Massachusetts, and New York to impose new levies on e-commerce companies. Lawmakers and legislative analysts say the number of states with active proposals could easily double as frustrations mount over tech companies’ untaxed billions. Any shrinkage in state treasuries also could drive legislative action.

If the bills succeed, companies such as Amazon.com Inc., Apple Inc., Facebook, Google LLC, and Microsoft Corp. could wind up owing millions in a slew of states.

“We have these tech giants that have largely been operating as monopolies,” said Massachusetts Rep. Erika Uyterhoeven (D), who is sponsoring a bill modeled after Maryland’s law. “They’ve been very effective at not paying their fair share of state and local taxes.”

The legislation is legally fraught, though, as Maryland has learned in the two years since it enacted the Digital Advertising Gross Revenues Tax. The first-of-its-kind law was quickly challenged in federal court by the US Chamber of Commerce and three tech trade associations. The communications companies Verizon and Comcast followed with an action in state court.

Both lawsuits assert violations of the US Constitution and the federal Internet Tax Freedom Act, which bars states from imposing discriminatory taxes on electronic commerce. A state court judge threw out the tax in October, ruling it unconstitutional; that case is before the Maryland Supreme Court now. The federal judge overseeing the Chamber’s challenge dismissed the matter a month ago, finding the lawsuit was mooted by the state trial court’s ruling. The Chamber appealed that decision to a federal appeals court Tuesday.

“I think people must be aware of the legal risk,” said Todd Lard, tax counsel for the business-focused Tax Executives Institute. “With the Internet Tax Freedom Act and certain provisions of the Constitution, it’s really hard to single out a business activity or a single industry. That’s what happened in Maryland, and they’re finding it’s really hard to home in on the digital economy.”

While the bills vary in details, Connecticut, Indiana, Massachusetts, and New York are proposing innovative tax structures targeting the search engine, social media, data mining, and online shopping business models. A few bills are modeled after Maryland’s law, which imposes a tax of between 2.5% and 10% on the annual gross revenue from digital ads flowing into the state from large internet advertisers with annual revenue more than $100 million. 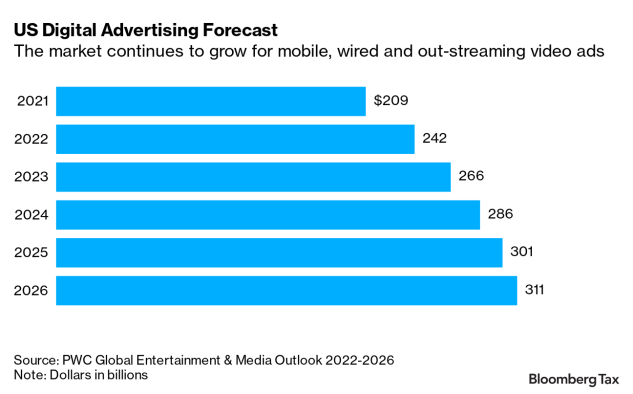 HD 1507 would create a special commission to study options for generating revenue from digital advertising from businesses with global revenue above $100 million.

Connecticut is another state borrowing Maryland’s template. Rep. Kate Farrar (D) introduced HB 5673, a broad measure that, among numerous other things, would impose a 10% tax on the annual gross revenues of large businesses making more than $10 billion from digital advertising services. The initiative is projected to generate $237 million per year.

“The digital advertising tax, I would say, really seeks to modernize our tax code, so that we’re really capturing folks that are generating profits off of our residents that are not paying our taxes and investing in our state,” said Farrar, vice chair of the Finance, Revenue & Bonding Committee.

New York efforts are taking a different approach by seeking to impose an excise tax on businesses that earn profits by collecting, packaging, and selling data about state residents. Rep. Leroy Comrie (D) introduced NY S1845, which would impose a flat 5% tax on the gross income of businesses engaged in data mining.

New York Sen. Liz Krueger (D) is back with S2012, which she first floated two years ago. The bill would create a graduated tax beginning at 5 cents per individual per month for commercial data vendors collecting data on more than a million New Yorkers in a month. The rate would ramp to a flat fee of $2.25 million per month plus 50 cents per individual per month on businesses collecting data on more than 10 million New Yorkers per month.

Indiana Rep. J.D. Prescott (R) has introduced HB 1517, which would tax social media companies’ annual gross income from advertising services at a rate of 7%. Additionally, Indiana would earn $1 per active account holder in a calendar year. The proposal, according to a fiscal note, is expected to collect between $118.5 million and $173.9 million in fiscal year 2025.

New Jersey is another state to watch—over the longer term, at least—after the Department of Taxation published a report on state tax considerations flowing from the digital economy. The report, which was required as part of the Fiscal Year 2022 budget, doesn’t recommend any new tax regimes, but examines emerging trends such as digital advertising, data services, and cloud computing, and evaluates these business models against the state’s current legal and administrative capacities.

While the action is currently confined to just four states, Jackson Brainerd, director of the fiscal affairs program at the National Conference of State Legislatures, said as many as nine states may debate bills taxing the digital economy before the end of the current legislative cycle. States that have considered such legislation in the last two years include Arkansas, Montana, Texas, Washington, and West Virginia.

Regardless of the legal risks, Brainerd said, lawmakers from both political parties are motivated by three themes: tech companies have unique and somewhat elusive business models that aren’t taxed properly; there’s a high level of mistrust of tech companies; and tech companies offer a potential revenue bonanza.

“Most state budgets are still in pretty good shape at the moment, but more of these proposals might start popping up if fiscal conditions become more strained,” Brainerd said.

Charles Kearns, a state and local tax partner with Eversheds Sutherland LLC, said several states are tweaking their legislative plans to avoid some of the constitutional potholes coming into focus in the litigation against Maryland. Still, many of the bills will run into a legal buzz saw if they even survive the legislative process.

“They still have the same legal and policy issues that have been raised in the past, irrespective of whether some of the language has changed,” said Kearns, whose law firm represents Verizon and Comcast in their challenge to Maryland’s law. “From our perspective, whenever you have a targeted tax on electronic commerce you run into the Internet Tax Freedom Act, and possibly these bills have commerce clause and due process issues.”

To contact the reporters on this story: in Chicago at mbologna@bloomberglaw.com; at aserrao-roman@bloombergindustry.com

To contact the editors responsible for this story: at kwayne@bgov.com; at klarsen@bloombergtax.com