States are considering an array of tax relief to help consumers with inflationary pressures, such as higher gas prices.
Photographer: Daniel Acker/Bloomberg via Getty Images

Rapidly climbing inflation in the U.S. is accelerating calls from governors and state leaders to provide immediate tax relief to cash-strapped residents facing higher prices on everyday products such as gas, milk, and electricity.

The governors of Maine and Kentucky this week joined a sweeping number of states—including Illinois, California, Massachusetts, Florida, Alabama, Washington, and Missouri—who are considering offering quick but temporary relief to taxpayers crushed by a relentless surge in inflation in recent months. The consumer price index—which measures what Americans pay for goods and services—reached another 40-year high last month, soaring to 7.5% due to strong consumer demand and pandemic-related supply disruptions.

The swift bipartisan action by state leaders over the past few weeks comes as congressional Democrats in Washington are rushing to line up legislation that addresses rising gas, medical, and food costs ahead of the midterm elections. Democrat and Republican states flush with cash due to higher-than-expected tax revenue, a soaring stock market, and millions in unspent federal pandemic aid have been eager to move quickly to return surpluses back to taxpayers.

“2022 is shaping up to be the year of bipartisan tax relief,” said Jared Walczak, vice president of state projects for the Tax Foundation. “Across the board, we’re seeing lawmakers trying to find ways to reduce tax burdens.” 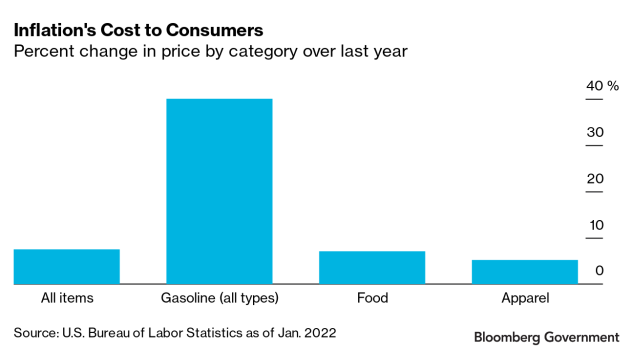 State lawmakers’ tax relief wish list runs the gamut from food store purchases to property tax to relief at the pump to household cleaning supplies, and even, retail and vehicle sales. While the adjustments are not uniform, all the proposals are moving in the same direction to rescue taxpayers even if temporarily, tax policy experts say.

A day earlier, Kentucky Democratic Gov. Andy Beshear signed an executive order halting an increase in vehicle property taxes that have climbed substantially due to skyrocketing car values. He also endorsed a plan by the state Legislature to temporarily cut the state’s sales tax by 1% for one year starting July 1 to help families pay higher costs that are anticipated to continue to rise through 2023.

“A booming economy and the best state budget in 25 years means we can do more to help our working families and small businesses buy and sell the essential goods and services that are costing more and that are simply priced too high,” Beshear said.

Consumers have been hammered by higher costs across the economy from food to apartment rents to airfares and electricity, effectively wiping out pay raises.

Republican lawmakers in New York and Connecticut have introduced legislation to either temporarily exempt or reduce the state’s sales tax rate.

In Connecticut, Republican lawmakers also called for part of the state’s surplus to be returned to taxpayers by reducing the general sales tax from 6.35% to 5.99% and eliminating a 1% surcharge on prepared foods, including restaurant meals.

There are 13 states that tax groceries—and now, Oklahoma, Kansas, Mississippi, and Virginia are among several considering phasing out the levy applied on food purchases entirely or at least temporarily.

Utah Republican Gov. Spencer Cox, as part of his $25 billion state budget, wants to give residents a $160 million grocery tax credit to help cover rising food costs. The majority of the tax rebate, he said, would go to households earning less than $100,000 per year.

In the Midwest, Illinois Democratic Gov. J.B. Pritzker, who faces re-election this year, offered inflation relief as part of his budget plan, sparing consumers nearly $1 billion in taxes for the upcoming year on groceries, gasoline, and property taxes.

“The higher cost of even basic necessities is making it harder to make ends meet,” said Pritzker earlier this month during an address from the state Capitol building in Springfield. “Government ought to do more to ease the pain and put more money in the pockets of hardworking Illinoisans.”

“These proposals are too small and too localized to deal with the fundamental problem of inflation,” said David Merriman, a professor at University of Illinois Chicago.

Help at the Gas Pump

State relief efforts come as Democrats in Washington proposed bills in the Senate () and House this month to temporarily suspend the 18.4 cents per gallon federal gasoline tax until Jan. 1, 2023. Some Senate Republicans have called it a “gimmick,” but the White House said it’s keeping all options on the table.

The proposal drew swift opposition from transportation and construction groups that say it would hurt the already strained Highway Trust Fund, which is supported by the gasoline tax and funds federal highway and transit programs.

“These short-sighted solutions will increase debt financing by billions and bring greater uncertainty to the solvency of the surface transportation system,” said Michael Johnson, president of the National Stone, Sand & Gravel Association.

Some opponents, including House Transportation and Infrastructure Chair (D-Ore.) also argue energy companies will pocket the savings instead of lowering prices.

As Americans continue to pay hefty prices at the pump, state lawmakers from both parties are also itching to offer a reprieve.

California’s Democratic Gov. Gavin Newsom wants to delay a hike in the state gas tax, calling it a “modest $523 million gas tax holiday.” He has received pushback from Democratic state legislators who raised concerns about its impact to the economy.

Republican Florida Gov. Ron DeSantis also wants to provide $1 billion in relief to suspend the state’s gas tax for millions of Floridians for five months, helping the average family to save $200. The state’s House Ways and Means Committee advanced a tax package Thursday that would establish temporary sales tax holidays, but doesn’t include DeSantis’ proposal to suspend the state’s gas tax.

Meanwhile, states such as Rhode Island are hoping to use their budget surpluses of $600 million to eliminate the state gas tax altogether in 2022.

“Our state budget is benefiting from inflation as the gas tax brings in new, unexpected revenue,” Rhode Island Republican Minority Whip Jessica de la Cruz said. “Meanwhile, the people of Rhode Island are struggling to balance their budgets with no relief in sight.”