The clock face of Big Ben is seen through a bed of Spring Primula flowers March 5, 2002, in Parliament Square in London.
Photographer: Sion Touhig/Getty Images

The BEPS Pillar Two initiative has hit some barriers, giving multinational enterprises some time on implementation. Tom Gottfried of Valuation Research Corp. looks at a few of those roadblocks.

The Base Erosion and Profit Shifting Pillar Two initiative—which appeared to be gathering steam toward widespread, if not universal, adoption next year—has hit critical roadblocks on both sides of the Atlantic.

In the EU, recent developments, such as Hungary’s last-minute objections, delayed the scheme’s adoption for at least a year. And in the US, the passage of a landmark tax and spending package that doesn’t comport with the OECD’s BEPS Pillar Two framework raises questions—about whether the version of a 15% minimum tax for large corporations contemplated by BEPS Pillar Two will be implemented in the largest economy in the world soon.

These delays bought large multinationals some additional time to model out the implications of a global minimum tax (GMT) on their operations and organizational structures.

Hungary surprised many international tax policy watchers early this summer, when it said it would veto implementation of a GMT in the EU under rules that require unanimity for most tax changes. Momentum had been building for rapid adoption by the EU, and Budapest’s move temporarily derailed the fast-track implementation planned for 2023. But French Finance Minister Bruno Le Maire, a major proponent of the global deal, has argued that the European Commission can invoke Article 329 of the EU treaties and move ahead over Hungary’s objections if it cannot be brought back into the fold. The EC is expected to debate the move later this fall if Hungary continues to object.

Minimally, however, Hungary’s eleventh-hour objection knocked the measure off schedule, compelling the Organization for Economic Cooperation and Development to push its ambitious timetable for implementation of the GMT under Pillar Two of the initiative to 2024. Pillar Two calls for a GMT rate of 15% for most large multinational enterprises (MNEs) with annual revenue of 750 million euros ($721.3 million) or more, excluding certain investment entities and organizations with special status.

One Bite of the Apple

Observers might be forgiven for initially thinking that the US was going all in on BEPS Pillar Two with the passage of the Inflation Reduction Act in August. After all, the law was viewed as the heir to the Build Back Better Act, which died in the Senate in early 2022 but was viewed as largely aligned with key provisions of BEPS Pillar Two. Even more confusing, the legislation included a provision for many US companies to pay a minimum tax of 15%, the same floor contemplated by BEPS Pillar Two and the legislation itself.

A closer look at the new US law reveals important differences, a summary of the which are outlined in the table below. 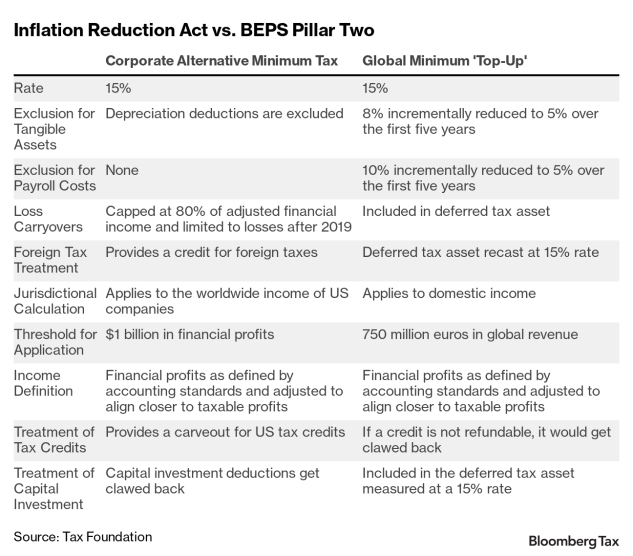 Of course, that doesn’t mean BEPS Pillar Two is dead in the US. The US Treasury under the Biden administration has been a vocal advocate for a global minimum tax, and it could be revived in the future. But major changes to US tax policy don’t tend to come along that often. The passage of the new law after months of gridlock hit Washington like a bolt of thunder, and few expect lighting to strike twice.

What’s an MNE to do now?

With all these developments, companies with complex cross-border tax considerations have bought some time on BEPS Pillar Two implementation. Still, it seems likely the minimum tax will be effective in the EU by the end of next year. And other jurisdictions—besides the US—either have already adopted it or are likely to do so. It’s not too early for affected tax filers to begin doing some pro forma effective tax rate calculations and planning how they might optimize their structure under the new regime.

In the meantime, they will also have their hands full onboarding the new US measure, which, in addition to setting its own minimum corporate tax, includes a new tax on share buybacks that must be digested.

Tom Gottfried is a managing director at Valuation Research Corp., specializing in global tax matters. He has over 15 years of experience in planning, facilitating and leading engagements related to corporate reorganizations, mergers and acquisitions, and restructurings.