Rep. Duncan Hunter arrives at federal court in San Diego on July 1. The California Republican goes on trial next year over charges of misusing campaign funds.
(Photo by Ariana Drehsler/Bloomberg via Getty Images)

While it doesn’t necessarily portend victory, campaign cash is a critical early metric of viability. Having ample funds can boost a contender’s name recognition and ability to consistently disseminate a message, which helps level the playing field with an electorate inherently more familiar with the incumbent.

Here’s a look at the best-funded House candidates challenging incumbents from their own party in 2020. The dollar figures noted parenthetically refer to a campaign’s cash on hand as of Sept. 30. The next fundraising reports are due at the end of January and will cover activity over the last three months of 2019. 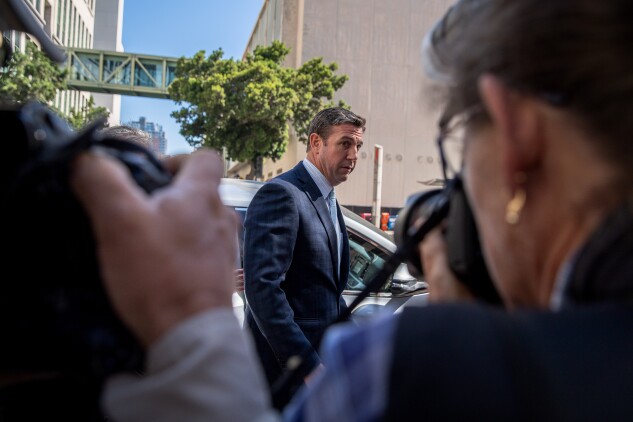 Rep. Duncan Hunter arrives at federal court in San Diego on July 1. The California Republican goes on trial next year over charges of misusing campaign funds.
(Photo by Ariana Drehsler/Bloomberg via Getty Images)

Other Republicans running include former Rep. Darrell Issa, who was one of the wealthiest members of Congress until retiring last year from the neighboring 49th District, and state Sen. Brian Jones. So is Democrat Ammar Campa-Najjar, who lost 52-48% to Hunter in 2018 in the strongly Republican district near the U.S.-Mexico border. Under California’s top-two primary format, the two candidates with the most votes in the March 3 primary will advance to the November general election, regardless of party affiliation.

Marie Newman (D), Illinois’ 3rd District ($514,000). Newman, a lawyer, is seeking to unseat Rep. in a rematch of a 2018 primary that Lipinski won 51-49%. Newman began her second bid against Lipinski much earlier than her first campaign. She’s again backed by EMILY’s List, which aids Democratic women who support abortion rights. Rep. (D-N.Y.), who unseated a House Democrat last year, endorsed Newman in September.

Lipinski, a member of the Blue Dog Coalition of Democrats who prioritize fiscal restraint, is one of the few anti-abortion-rights Democrats left in Congress. He’s a senior member of the Transportation and Infrastructure Committee and chairman of its Railroads, Pipelines, and Hazardous Materials Subcommittee.

Newman won’t have a 1-on-1 race against Lipinski this time, though. Rush Darwish, a businessman, is also seeking the Democratic nomination and had banked $318,000 -- thanks in part to a $78,000 personal loan -- by the end of September. In most states, including Illinois, a plurality of the vote is sufficient for victory.

Chris Putnam (R), Texas’ 12th District ($448,000). Putnam is a businessman and former Colleyville city councilman who’s attacked Rep. for not endorsing Trump in 2016. Granger, who’s been in Congress since 1997, is the most senior Republican on the Appropriations Committee and a former Fort Worth mayor. She’s never been seriously threatened in a primary and last faced a Republican opponent in 2012. The Texas primary is March 3.

Democrat J.D. Scholten is seeking the seat again after coming within 3.3 percentage points of unseating King last year in the strongly Republican district.

Jessica Cisneros (D), Texas’ 28th District ($292,000). Cisneros, a human rights lawyer, is taking on eight-term Rep. , a Blue Dog who works well with Republicans and represents a Hispanic-majority district that includes Laredo and some suburbs of San Antonio. Cisneros has the backing of EMILY’s List and Ocasio-Cortez.

Cuellar, a member of the Appropriations Committee, ran unopposed in five of the previous six Democratic primaries. His 91% rating from the U.S. Chamber of Commerce on its 2018 vote scorecard was the highest for a House Democrat.

Beatty has a liberal voting record and is chairwoman of the Financial Services Diversity and Inclusion Subcommittee. She sponsored House-passed bills in the 116th Congress that seek to increase diversity on regional Federal Reserve Banks and provide mortgage insurance discounts to first-time homebuyers who complete a financial literacy course.

Holly Lynch (D), New York’s 10th District ($174,000). Lynch, who has a background in advertising and angel investing, is among several primary challengers to Judiciary Committee Chairman , a House member since 1992 and a key figure in the Democratic-led House’s impeachment probe of Trump. Lynch has mostly self-financed her campaign.

Nadler’s other intraparty challengers include Lindsey Boylan, a former state economic development official who had $157,000 in the bank as October began. The district includes parts of Manhattan and Brooklyn and is staunchly Democratic.

Esmeralda Soria (D), California’s 16th District ($133,000). Soria, a member of the Fresno City Council, is opposing eight-term Rep. in the top-two primary. Soria is running to the left of Costa, a veteran California politician and a compromise-minded Blue Dog who leads the Agriculture Committee’s Livestock and Foreign Agriculture Subcommittee and has voted with Republicans on some energy and regulatory legislation.

To contact the reporter on this story: in Washington at ggiroux@bgov.com