The pace of processing loans from a popular coronavirus relief program for U.S. small businesses has slowed abruptly, allaying initial concerns that a second round of funding would be exhausted in a matter of days.

The initial $349 billion for the Paycheck Protection Program in 13 days, finishing at a clip of more than $30 billion per weekday. The additional $320 billion for the initiative, on April 27, reached $175.7 billion in approvals in five days, but the has reported only $11 billion processed since then -- a daily pace of $2.3 billion.

The slowdown has raised a fresh question: Why? Groups representing small businesses and lenders pointed to several possible factors, including the processing of a backlog of applications from the first round; the removal of duplicates from borrowers who applied at more than one bank; and the wariness of some firms applying after the Trump administration warned that companies that take loans and don’t need them could face criminal prosecution. 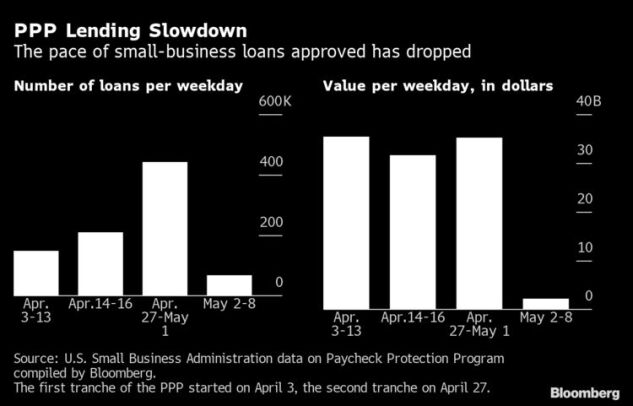 Republican Senator of Florida, chairman of the Senate Committee on Small Business and Entrepreneurship and one of the program’s architects, blamed the slowdown on lack of clear guidance on how proceeds can be spent, as well as fears about unwanted attention after the public outcry about large companies getting loans at the expense of mom-and-pop shops in the first round.

“Scrutiny over what businesses received loans turned into hysteria & is scaring many from applying,” Rubio said on Twitter Friday.

Another factor might be the confusion about the conditions to turn the loans into grants. Treasury and SBA have missed a deadline to provide about how to calculate the portion of the loan that is forgivable, and firms may be concerned that they’ll be on the hook to repay it if they don’t meet all the conditions.

A survey of members on May 1 showed that 77% had applied for a loan, and only 9% of members who hadn’t were in the process of applying.

The program, a centerpiece of the $2.2 trillion relief package Congress enacted in March, offers loans of as much as $10 million for small businesses that can become grants if 75% of the proceeds are spent on payroll and the rest on rent and other approved expenses for two months.

Last week the second round averaged about $35 billion in loans processed from about 442,000 applications per weekday, similar to what happened last month with the initial tranche. This week the pace has slowed to about $2.3 billion from about 67,000 loans approved daily, SBA data show.

The main reason is that the agency has processed batches of applications submitted by banks when the program restarted -- batches initially of at least 15,000, then reduced to 5,000 -- and is now handling them individually on a rolling basis, according to a spokesman.

There are also other options besides PPP with relief programs such as the Federal Reserve’s Main Street Lending Program, said of the .

“It’s not the deluge of loans that were initially processed,” Merski said.

Following outrage over larger publicly traded companies getting PPP loans, the SBA has tried to ensure more loans are getting to the smallest firms, even reserving eight hours for only the smallest of lenders to submit applications on April 29. As a result, the average amount of loans being approved in the second round of funding has dropped to $73,512 as of Friday compared with $206,000 in the first round, according to the SBA.

Of the 378 loans totaling $1.2 billion received by public companies as of mid-afternoon Friday, 47 worth $350.4 million have been returned, according to data compiled by FactSquared.

At the current pace of loan approvals, it would take 11 weeks to exhaust the approximately $125 billion that remains for loans from the second round of funding.

(Updates with figures from the SBA beginning in the second paragraph.)