Lenders that have historically provided capital to underserved areas—the focus of the opportunity zone tax breaks—have struggled to get involved in the burgeoning market for the tax-advantaged investments.

Of the 1,100 community development financial institutions across the country, just a handful have managed to participate, and they cite a laundry list of barriers, including an inability to take investments themselves. Elements of the policy’s design and related IRS rules have shut out these institutions or made their work leveraging the incentives harder, community development professionals say—all while opportunity funds, whose investors reap the tax breaks, have raised billions of dollars to spend in communities that CDFIs exist to serve.

Under a provision in the 2017 tax law, investors who funnel profits into those funds to finance projects in roughly 8,800 census tracts can delay and reduce their capital gains taxes. Because the policy is built on capital gains tax benefits for long-term equity investments, many CDFIs are shut out, even if they are located in one of those census tracts.

Business Impact NW is a Seattle-based CDFI in one of the city’s roughly two dozen opportunity zones. A Small Business Administration grant directs Business Impact NW to conduct training sessions on the incentives, “but that’s really the only way that we’ve really found a way to participate in them,” said Joe Sky-Tucker, the CDFI’s executive director.

“It’s almost impossible, as the statute was written, for CDFIs to really participate in the benefits,” he said. 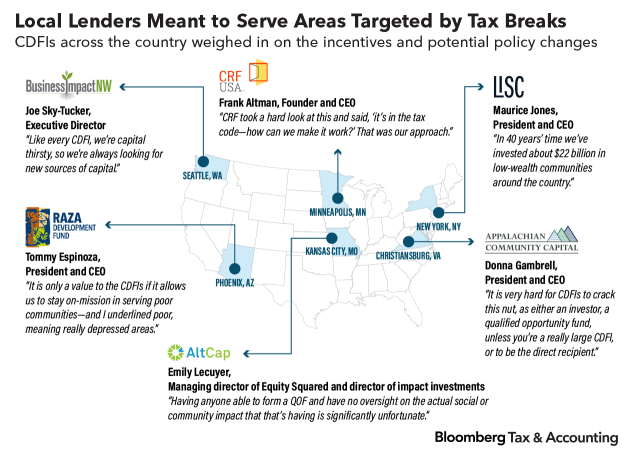 One of the most commonly cited problems for CDFIs trying to get involved in the market is that opportunity funds make equity investments, taking ownership of the businesses and projects they’re financing, rather than providing loans as CDFIs often do.

“A new tax incentive is needed—one where the decision on what to finance rests with entities that are accountable to the community: community development financial institutions,” said Lisa Mensah, president and CEO of the Opportunity Finance Network, an association of more than 300 CDFIs.

Among the handful of CDFIs that have edged into the market, some say there is demand for equity, rather than debt, among the businesses they help get off the ground. But even the few CDFIs that that have successfully leveraged the opportunity zone policy have faced challenges and want to see changes.

Investors put profits into opportunity funds in an effort to lower their tax liabilities, and look for a boosted after-tax return on those investments. While impact-minded opportunity funds certainly exist, the incentives grow with profits, not with hiring, wages, or other measurable community impact—making already hot, fast-growing neighborhoods an easier play.

AltCap, a CDFI in Kansas City, Mo., established an opportunity fund as a separate entity known as Equity Squared LLC. But an education gap has made fundraising difficult, said Emily Lecuyer, its managing director. The opportunity zone incentives are often unfamiliar to those used to working with CDFIs, and opportunity zone investors need to understand how CDFIs work.

“There are some investors who’d rather we just ask them for a donation,” said Lecuyer, who is also director of impact investments at AltCap.

CDFIs are often nonprofits, so equity financing from opportunity funds wouldn’t make sense in many cases. On top of that, IRS rules (T.D. 9889) made final late last year include a requirement that effectively blocks CDFIs from qualifying as businesses eligible for opportunity fund equity.

Businesses financed by opportunity funds can hold no more than 5% of their assets in “nonqualified financial property,” which includes debt, stock, and other financial instruments—not ideal for a financial institution. Under the rules and the law, respectively, those businesses are also subject to tight deadlines for using up all their money and more than doubling their basis, or the value of investment in them.

“It is very hard for CDFIs to crack this nut, as either an investor, or a qualified opportunity fund, unless you’re a really large CDFI, or to be the direct recipient,” said Donna Gambrell, president and CEO of Appalachian Community Capital—which has successfully leveraged the incentives—and a former director of the Treasury Department’s CDFI Fund.

That’s because, she added, “the rules have not been structured to have those funds go directly into the CDFI, although I would love to see that.”

A Treasury spokesperson didn’t immediately respond to a request for comment on the rules.

There are already calls from some Democrats to make changes. A bill (H.R. 7262) from Rep. Gregory Meeks (D-N.Y.) would allow CDFIs to take opportunity fund investments by designating them businesses eligible for such financing. Still, only Democrats have backed the measure so far. Think tanks and other organizations unsuccessfully lobbied the IRS and Treasury to give CDFIs this big exception from some of the policy’s requirements while officials were crafting the rules in 2018 and 2019.

And President-elect Joe Biden’s opportunity zone reform agenda seeks to encourage “opportunity funds to partner with non-profit or community-oriented organizations and jointly produce a community-benefit plan for each investment” with a focus on job creation and directing financial benefits to households in the zones.

Some community development professionals suggested that not just encouraging but requiring opportunity funds to partner with a CDFI or demonstrate experience in community development finance would be a good way to steer them toward the institutions that carry out the policy’s intent. It’s something the CDFI Local Initiatives Support Corporation and the think tank Center for American Progress advocated for early in the regulatory process.

“Part of refining definitely needs to be focused on making this a program where more mission-based organizations can play,” said Maurice Jones, CEO and president of Local Initiatives group, which has been partnering with developers on opportunity zone projects.

There are lots of ways for CDFIs to adapt, said Michael Swack, who directs the University of New Hampshire’s Center for Impact Finance and coauthored an extensive report on the roles the institutions could play in the opportunity zone market. But until there are changes to the policy to facilitate more CDFI involvement in projects, he and others said, it’s a blunt instrument.

“The initial idea was that they’re going to be opportunity zones, and that it would be targeted towards low- and moderate-income communities, and it is by geography, but by no other targeting,” he said, noting that his office, on a college campus, is in an opportunity zone. “Unless you have more specific targeting of who the beneficiaries are, it’s not going to work.”