“Let’s not let the opportunity get away for a major deal next week," said French Finance Minister Bruno Le Maire in a statement to Bloomberg News.
Photographer: Hollie Adams/Bloomberg

The 140 countries attempting to conclude years of negotiations to overhaul global tax rules for an increasingly digitized economy are racing to resolve key details against a ticking clock.

With just over a week until an Oct. 8 meeting of all the governments involved, negotiators are still wrestling over parameters of setting a global minimum corporate tax and sharing the spoils from levies on tech giants like and ’s Google, according to people familiar with the matter.

They are also trying to work out how the global deal will coordinate countries on halting new unilateral digital taxes and unwinding existing measures -- a hot-button issue for governments seeking to protect revenues, and for the U.S., which sees such levies as discriminatory against its firms. 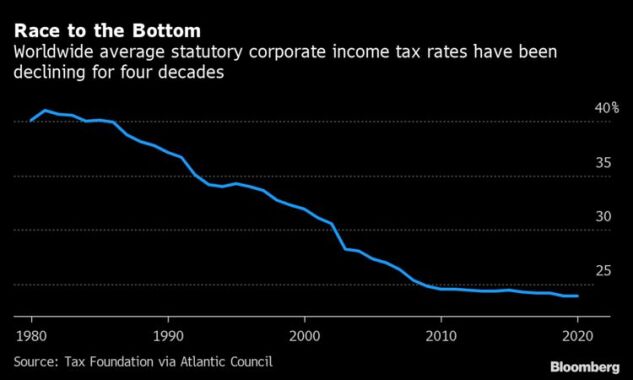 Hanging over the talks is uncertainty over whether the U.S. could actually make good on any kind of agreement after a leading Republican senator, , said this week that Congress probably would .

Taken together, the hurdles threaten the goal of the Biden administration and the Group of 20 advanced economies to end a revenue-eroding race to the bottom of offering ever-lower taxes to lure business investment. The changes to global levies are a key piece of Biden tax proposals to help pay for trillions of dollars in social spending.

And more broadly, the Organization for Economic Cooperation and Development, which is attempting to broker a deal, has warned failure would lead to a cocktail of unilateral digital levies and trade and tax disputes that could strip more than 1% off global economic output annually.

In the run-up to the Oct. 8 meeting of all the countries involved, Group of Seven finance ministers, who have shaped the talks at key moments, met Wednesday on a conference call. The U.K., which currently chairs the group, said there was “a common understanding” on some important issues and a commitment to implementation. But nations stopped short of specifying positions on the headline numbers that will shape the deal.

“The conversation was constructive and we have made a lot of progress on important points,” French Finance Minister said in a statement provided to Bloomberg News. “Let’s not let the opportunity get away for a major deal next week. We can get there.”

The talks are split into two separate streams. The first, known as Pillar One, aims to reallocate some tax revenue from where multinationals book profits to where they have sales, while Pillar Two seeks to create a global minimum corporate tax rate.

After years of slow progress amid trade battles and inertia during ’s presidency, proposals from the Biden administration helped countries reach a on both pillars in July.

But the statement from the Inclusive Framework -- the 140 countries involved in the talks – left a few key details to be decided before the G-20 signs off at a leaders’ summit in Rome at the end of October.

On Pillar One, while there is agreement that some profits of the biggest multinationals should be reallocated, the exact amount remains at issue, according to people familiar with the talks.

The July statement set a range of 20% to 30% of profits above a 10% margin to be reallocated. Some developing countries, notably from the Group of 24, which includes Brazil, India, and Nigeria, have called for the number to be not less than 30%. France has proposed a compromise at 25%.

Wrapped up in that tussle is the question of how and when national digital taxes will be rolled back as countries start to receive fresh revenues under the new rules, and when governments must agree to stop introducing new unilateral measures.

Countries must also still determine where the reallocated profits will come from -- and therefore who stands to lose most.

The answer to this question will help determine how the agreement affects U.S. tax revenue, and whether the deal ultimately gets the backing of the “investment hub” countries where firms currently park profits. The Biden administration has already said it expects Pillar One to be about revenue-neutral for the U.S.

Countries also aim to reach a final agreement on the precise minimum tax rate under Pillar Two by Oct. 8, people familiar with the matter said. The July accord called for “at least 15%.”

Ireland, which didn’t sign on to that statement, is worried the final number could end up significantly higher than its 12.5% corporate tax rate. Irish Finance Minister said he reiterated concern about the “at least” language to the G-7 on Wednesday.

Even so, ministers are “further along in agreement” than the last time they met, Japanese Finance Minister told reporters following the G-7 call.

“But those who are on the side of collecting tax are demanding more, so it’s difficult to get to an easy agreement on the minimum corporate tax rate,” Aso said.

Beyond deciding the rate, there are still differences on what to carve out of the minimum tax rule. , the European Commission’s director for direct taxation, said Wednesday that about 90% of ongoing Pillar Two discussions are related to carve-outs.

In the months ahead, the OECD will work on model rules to help countries adopt Pillar Two, along with a multilateral convention to implement Pillar One, the people said.

That is where the whole initiative could later run into trouble in the U.S.

For Pillar One to ultimately take effect, Toomey said during a hearing Tuesday there was “no way around” requiring treaty ratification with a two-thirds Senate vote that would likely fail.

A Biden administration official disputed Toomey’s assertion that a formal treaty would be required. Congress has in the past used regular legislation to override existing tax treaties, said the official, who spoke on condition of anonymity because they weren’t authorized to speak publicly on the issue.

To contact the reporters on this story:
in Paris at whorobin@bloomberg.net;
in Arlington at igottlieb1@bloomberg.net