Lawmakers are banking on the House to pass a major infrastructure bill Thursday that would reauthorize expiring surface transportation programs and avert thousands of furloughs and halted payments.

House Transportation and Infrastructure Chair (D-Ore.) said he is “not speculating on failure” of the legislation, which is up for a vote the day of the deadline to reauthorize highway, transit, and safety programs. Sept. 30 is also the deadline for lawmakers to pass a broader government funding bill as the new fiscal year starts.

More than 2,500 Federal Highway Administration employees would be furloughed and federal highway programs “would cease” after Sept. 30 if the highway bill authorization expires, the Department of Transportation said in a contingency plan released Tuesday.

The Federal Transit Administration would also largely shut down absent a reauthorization or short-term extension. The agency, which doesn’t directly operate transit systems, would be unable to keep funds flowing to its state and local partners, the department said.

If both annual appropriations and surface transportation reauthorization lapse, more than 22,000 employees at the Department of Transportation would be furloughed, the agency said.

The Senate-passed infrastructure measure () would reauthorize surface transportation programs for five years, allowing money to be spent from the Highway Trust Fund. It would provide more than $100 billion to bail out the fund, which doesn’t generate enough revenue from fuel taxes to cover expenses.

Republicans have blamed Democrats for delaying a vote on the infrastructure bill in a bid to seek support for a broader social spending and tax package.

“Democrats have pushed us to the wire,” with the twin Sept. 30 deadlines, Rep. (R-Ark.) said, decrying ”forcing a vote on sweeping legislation and outrageous spending in the final hour.” Crawford said he’s voting against the infrastructure bill.

Senate Avoids Solutions on Highway Funding With Another Bailout 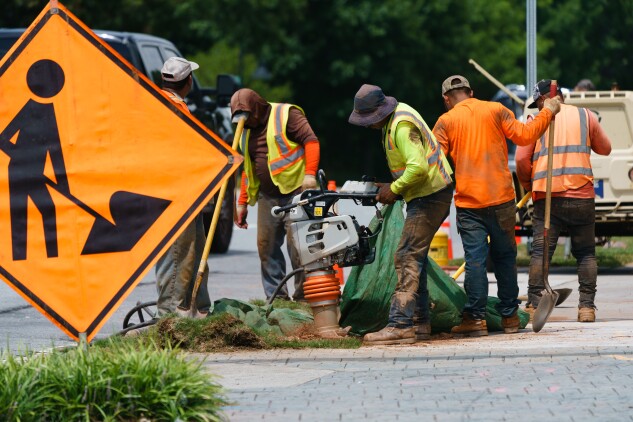 Road workers take on a project in Marietta, Ga., on July 14, 2021. Business and labor groups ae pressing for passage of the infrastructure measure.
Elijah Nouvelage/Bloomberg via Getty Images

Democratic leaders are sticking with their plan to vote on the Senate infrastructure bill Thursday, and passage without change would send it to President Joe Biden’s desk. That outcome isn’t assured as progressive Democrats threatened Tuesday they won’t support it before a vote on the larger spending and tax bill.

Progressives said lawmakers could pass a short-term extension to avoid a lapse if they can’t get the infrastructure bill passed in time.

Rep. (D-Wash.), chair of the Congressional Progressive Caucus, said there are many ways they can handle the highway bill deadline, including tying an extension to stopgap legislation to keep the government running. There have been 28 short-term surface transportation extensions, Jayapal said. A continuing resolution the House passed last week omitted a temporary extension of highway programs; that legislation failed in the Senate on Monday.

“We can get that reauthorized, no problem,” Jayapal said Monday. “There are a lot of different ways to do that.”

Rep. (D-Calif.) said the deadline is a “fake cliff” because lawmakers frequently have done short-term extensions. “There is absolutely no reason we couldn’t resolve this at the same time we resolve broader government funding because we are going to do a clean CR for that anyway,” he said.

States and transportation leaders have cautioned lawmakers throughout this year against temporary and short-term extensions because they fall short of the certainty agencies and localities need when paying for long-term projects.

“Funding stability provided by federal transportation programs is crucial for Michigan’s extensive capital investment needs, the needs which take multiple years to plan and construct, especially during a time of financial duress,” Whitmer testified at a Senate hearing in February. “Short-term program extensions are damaging because they can cause unnecessary program disruptions and delay essential safety and mobility benefits to Michigan communities.”