Many debt-financed industries are exempt from the 2017 tax law's restriction on loan interest payment write-offs. Above, a 2018 Ford Expedition SUV moves through the assembly line at the Kentucky Truck Plant in Louisville on Oct. 27, 2017.
Photographer: Bill Pugliano/Getty Images

A part of the 2017 tax law meant to curb companies’ staggering use of debt to finance their activities isn’t doing that—partly because the provision, one of the law’s few big revenue-raisers, is full of holes.

U.S. corporate debt has risen above $9 trillion, raising fears of systemic financial stability risk. A provision in the law was meant to cut down on multinationals’ practice of borrowing from affiliates in low-tax jurisdictions, paying interest to those foreign affiliates, and then deducting those payments at home. Lawmakers also intended for the provision to shift companies away from debt and toward equity when financing their activities.

However, the tax law exempted commonly debt-financed industries or allowed them to opt out of the new restriction on their loan interest payment write-offs. It permitted them to carry the excess interest that they can’t deduct in one tax year to later years for future potential deductions—forever. And the current calculation of the restriction limits its reach to only a relative handful of corporate debt issuers.

While issuance of risky loans is on the rise and some are sounding alarms, alluding to the 2008 financial collapse, debt is still the tax code’s more favored mode of financing, tax professionals said.

“Based on discussions that I’ve had with clients on the change in the tax law, I would say they’re not changing for the most part,” said Nick Gruidl, a partner in RSM US LLP’s Washington National Tax office. “The question would be: What is the result if we issued equity instead of debt? If we issued equity instead of debt, there’s no deduction anywhere. Why would I stop issuing debt that’s limited as opposed to issuing equity that’s not deductible at all?” 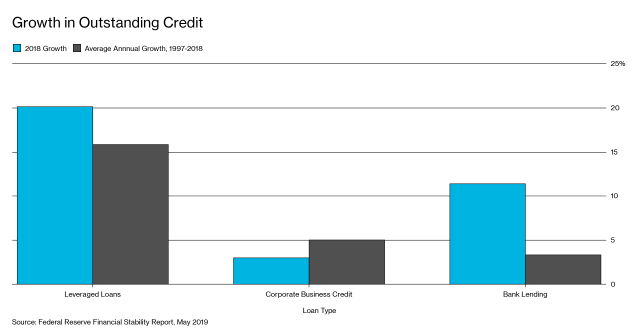 The Debt vs. Equity Cost Calculus

Relative to gross domestic product, business credit continued its climb back toward pre-recession levels in 2018, while household debt continued its post-recession decline, according to a May Federal Reserve report. Although that rise slowed slightly last year, loans to highly-indebted corporations—specifically, those with high ratios of debt to earnings—rose more than 20% in 2018, to over $1 trillion, and those riskier loans took up a much larger slice of the corporate debt pie.

The law significantly reduced the effective corporate tax rate on investment in new assets like buildings and equipment using equity, according to a report on the overhaul from the nonpartisan Congressional Research Service.

But the rates on such investment using a mix of debt and equity fell almost as substantially, keeping those effective tax rates well below the rates on purely equity-financed investment. That indicates the law didn’t do much to shift the cost calculus toward pure equity financing as opposed to using debt.

“Even after factoring in the loss of the tax deduction, it’s entirely possible that equity financing is still more expensive than debt financing,” Robert Willens, a New York-based tax consultant, said in an email. “That would go a long way towards explaining why refinancing activity hasn’t been what it was expected to be.”

For Now and Forever

Companies loaded with debt may not be taking the new limit too seriously because even if they can’t use all their debt interest payments to shrink their tax bills in a given year, they can just use them in the future. They face no deadline on offsetting their later-year tax liabilities with not-yet-used interest payments, absent a merger, acquisition, or other change in the company’s ownership.

Germany placed a nearly identical cap on its companies’ interest payment write-offs about a decade ago, and German companies did reduce their debt—albeit slightly—in response, according to research on its effects. But the country’s restriction allowed companies to carry forward any excess interest payments they couldn’t use to offset a current-year tax bill to later years for up to five years. After that, the tax benefit would expire.

“To the extent this provision limits interest deductions in any year, you get to carry forward that interest indefinitely,” said Matt Gardner, a senior fellow at the Institute on Taxation and Economic Policy. “That lengthens the horizon over which companies have to deal with this new rule.”

Gardner and others noted that plenty of companies are sitting on enough losses—which, like interest payments, can also be subtracted from taxable income—to avoid paying cash taxes for a while anyway.

Few corporations may be adjusting their financing in accordance with the new restriction because sectors that tend to rely on debt were either exempted from it or given the chance to opt out.

Capital-intensive industries, such as telecommunications and manufacturing, often rely on debt to fund their machinery and facilities, and are generally highly leveraged.

But lawmakers made capital-heavy regulated utilities automatically exempt from the restriction on debt interest deductions. (In return, they can’t immediately write off the cost of capital purchases, as businesses subject to the limit can under another part of the law.)

Certain farming businesses and real estate enterprises can elect out, but have to write off the cost of capital purchases more slowly as a result. In the vast majority of cases, tax professionals often say, indebted real estate firms are making that election.

More than 150 firms and organizations lobbied on the provision during the fourth quarter of 2017, and the real estate and utility lobbies came out in full force.

The scope of what’s considered real estate—and therefore eligible for the election to opt-out—could also go well beyond the traditional definition. Non-real estate businesses, such as assisted living facilities, that also own property in a separate entity and lease it to their main operating business, are urging that the Internal Revenue Service allow them to elect out via public comments on proposed regulations (REG-106089-18).

Those rules also came with guidance applying the real estate opt-out election to infrastructure projects, whose investors can rest assured the debt they use to finance those deals won’t get more expensive as a result of the law.

Tax professionals also said the law’s measure of income—earnings before income, taxes, depreciation and amortization—was so large that the 30% cap is hardly hitting anyone just yet.

“Thirty percent of EBITDA is pretty high,” said Reuven Avi-Yonah, a professor at the University of Michigan Law School who focuses on corporate and international taxation. “I didn’t expect that this would lead to a significant reduction in debt in favor of equity.”

In 2022, that income measure is set to narrow to just earnings before interest and taxes, meaning the 30% ceiling will drop as well and the number of companies affected will expand. The change will nearly double the revenue intake stemming from the restriction, according to the Joint Committee on Taxation’s estimates.

Some lobbyists on K Street are planning an effort to stop that from happening. Others, such as manufacturing groups, are pushing the IRS and Treasury Department to make the current income measure, and therefore the cap, more expansive in their regulations.

The many months the IRS is taking to finalize those rules could be delaying a potentially larger corporate reaction, tax professionals said.

The strong U.S. economic climate isn’t providing much of an incentive to avoid big risk-taking.

That’s subject to change, and because the interest deduction cap is based on earnings, the limit could kick companies while they are down if a recession were to hit. The full-expensing provision is also set to sunset, and the tax law includes other temporary perks for companies under budget restrictions triggered by procedural rules used to pass the legislation more quickly.

But for now, the default rate is low, as is the Federal Reserve’s policy interest rate target for overnight bank-to-bank loans, which is closely followed by other interest rates on mortgages, credit cards, and corporate bonds.

Although the central bank has gradually boosted its federal funds rate above its near-zero post-recession level, the rate remains well below historical levels. Some even expect the Fed to start cutting the rate again this year. And so debt will remain in fashion as long as the tax code is biased in its favor, tax professionals said.

“Interest rates are so low,” Gruidl said. “The market is there for that.”

To contact the reporter on this story: in Washington at loneal@bloombergtax.com