Hoyer at the Capitol on June 25.
Photographer: Stefani Reynolds/Bloomberg

House and Senate leaders are striving for a deal on a pandemic relief package by the weekend to set up votes by the middle of next week, House Majority Leader said Wednesday, expressing optimism despite a months-long stalemate.

The Maryland Democrat said he talked with Senate Majority Leader on Monday and they agreed “it would be optimal if we could get to an agreement by this weekend.”

He acknowledged that timetable is optimistic, but said the recent flurry of proposals on a compromise offer “positive steps” forward for the long-stalled negotiations.

Still, both sides appeared to be holding to some of the earlier positions that left negotiations at a standstill. They again accused each other of putting partisanship ahead of compromise, and it was unclear on Wednesday whether Democrats and Republicans have moved far enough to provide a breakthrough. 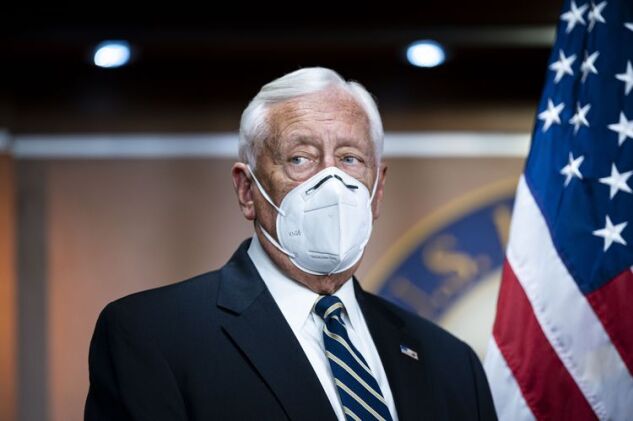 Senate Democratic leader showcased the dividing lines again Wednesday, blasting McConnell’s latest plan as “another inadequate partisan proposal.” McConnell showed no sign of budging in remarks on the Senate floor reiterating the need for a “targeted” approach for any new stimulus.

House Speaker and Schumer have presented a new stimulus proposal to McConnell and Treasury Secretary , though they refused to release details. McConnell responded by circulating his own plan to fellow Republicans, saying it had the blessing of President . While he labeled it a new proposal, an outline distributed to GOP senators showed it was largely a revision of an earlier $500 billion plan that had been rejected by Democrats as inadequate.

Separately, a bipartisan group of lawmakers from the House and Senate have offered a $908 billion compromise package, which so far hasn’t been embraced by leaders in either party.

Mnuchin told reporters Wednesday that he had spoken “briefly” with Pelosi Tuesday about her new pitch, but declined to offer public comment on it. He said that he didn’t plan to speak with her again Wednesday.

Asked what Trump will sign, Mnuchin said Trump favors the approximately $500 billion McConnell plan. Prior to losing the election, Trump said he wanted more than $2.2 trillion in stimulus.

The emergence of the proposals reflected the rising concerns that the economy needs another boost amid evidence that surging Covid-19 cases are undermining the recovery as past fiscal support runs out.

The pandemic also is driving action in Congress. Hoyer and other lawmakers said the continued spread of the coronavirus across the country is adding urgency to efforts to wrap up congressional business so members can return home and safely quarantine before the holidays.

Over the next 10 days, Congress also has to deal with passing a $1.4 trillion annual spending bill to fund government operations. The U.S. government has been working under a stopgap measure since the fiscal year began on Oct. 1. That expires Dec. 11, and missing the deadline would trigger a partial government shutdown.

The must-pass measure has emerged as the potential vehicle for pandemic-related relief measures, such as aid for small businesses and funding or vaccine distribution. However, there are differences there as well. Those include Trump’s demand for border wall and immigration enforcement funding, West Virginia Republican Senator said. However, she predicted agreement could be struck in time in part because lawmakers want to leave the Capitol to avoid catching the coronavirus.

Missouri Republican Senator Roy Blunt said getting the spending bill finished is key to getting other legislation wrapped up, including any pandemic relief.

“If we get it done, it opens the potential door for other things,” Blunt said.

Congressional leaders also are moving to bring the annual defense authorization bill for a vote despite Trump threatening to veto it unless Congress abolishes a law that protects technology companies from liability over most user content.

Schumer separately highlighted Democratic opposition to liability limitations for businesses over Covid-19, something that’s been a priority for McConnell.

“The latest Republican offer on Covid will include immunity for corporations who put their workers at risk from Covid but not a dime for workers who lost their jobs because of the pandemic,” Schumer said. “The Republican leader should not waste the Senate’s time on another inadequate partisan proposal and instead should sit down with Democrats to begin a true bipartisan effort to quickly meet the needs of the country.”