(Editor’s note: This is the third in our “Stories of Summer” exploring the impact of Covid-19 on the global economy, telling the larger story of a once-in-a-multi-generational crisis through the voices of individuals and small businesses. For more, see on the Bloomberg terminal, visit @QuickTake on Twitter and see the YouTube playlist.)

From March through May, the normally-hopping boardwalk near Houston was silent. Screams from amusement park rides were nonexistent, restaurant goers disappeared and souvenir shops shut their doors as the global pandemic made its way through Texas.

Like many small towns reliant on travel and tourism, coronavirus-related lockdowns have devastated the local economy in Kemah, where the boardwalk is located. Though the city’s population is only about 2,000, 3 million people visit the Kemah boardwalk annually, according to a 2015 report from Visit Houston. About 87% of the city’s annual tax revenue comes from the boardwalk alone, according to Kemah Mayor Terri Gale.

Lost sales from boardwalk closures have already cost the city $1.5 million, or about 37% of expected annual tax revenues, she said, which will produce a knock-on effect when property-owner bills come due. 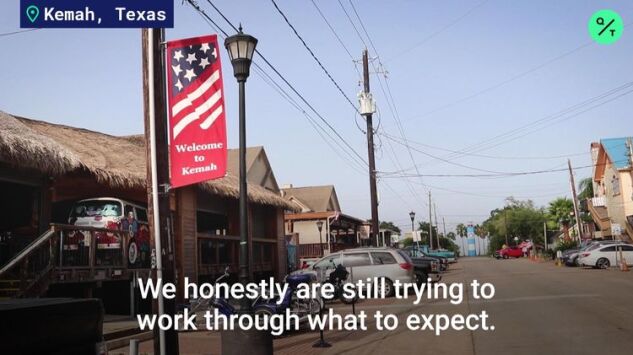 “When you’re as dependent on sales tax revenue as Kemah is, we got hit pretty hard by all of the business closures that happened,” Gale said. “Unfortunately, we had to make some pretty rigorous budget cuts to our permanent staff, our overhead staff.”

State and local governments across the country have been cash-strapped as a result of the coronavirus, and have urged President Donald Trump and Congress to help ease the crippling economic . A Democrat-backed bill that would give states and cities more than $1 trillion has stalled in Congress.

Kemah’s boardwalk rides reopened on June 5 and restaurants are now operating at 50% capacity, which has helped bring back tourists and some tax revenues for the city. But a surge in virus cases in Texas in the last month, particularly in nearby , has led to uncertainty for small businesses. A total of 86 cases have been reported in Kemah from March through July 11, according to the Galveston County Health District.

Kemah formed a business-recovery task force to prepare for a potential second lockdown, with a goal of helping small firms plan how they could recover most quickly, as well as build awareness among Kemah residents and visitors about how to limit virus spread, Gale said: “We want you to come to Kemah, but we want you to be responsible if you do.”

Lex & Mae, an apparel boutique along Kemah’s waterfront, hosted its grand opening just two weeks before coronavirus lockdowns began. Carey Crump, the store’s owner, pivoted to selling face masks and apparel online while the store was shut down, but it wasn’t enough to offset the lost business, she said.

“We won’t survive being shut down again,” Crump said.

To contact the authors of this story:
in New York at orockeman1@bloomberg.net

in New York at vfayzulin@bloomberg.net

To contact the editor responsible for this story:
at slanman@bloomberg.net