’s victory in the presidential election and the unresolved status of Senate control left slim prospects for a major fiscal-stimulus package before January.

While President last month pledged a large post-election stimulus act, it was based on his assumption that he’d win re-election. He now has little political incentive -- or capital -- to drive a deal through a divided Congress in his remaining weeks in office.

Democratic and Republican lawmakers were quick to restate their opposing positions on Friday as Biden closed in on his win. Senate Majority Leader cited in arguing for a “highly targeted” relief bill. House Speaker rejected that idea, saying “that isn’t something we should be looking at.” 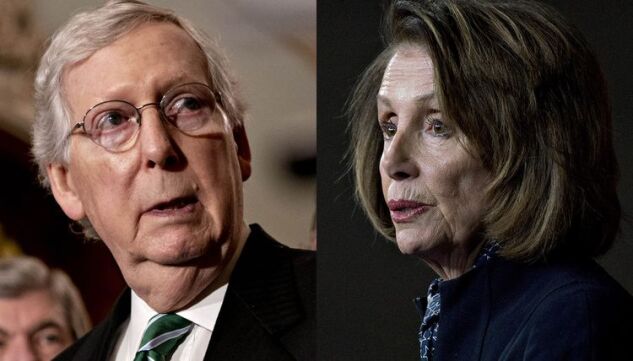 While each side called for renewed talks, and neither advocated holding off until next year, Democrats potentially have an incentive to wait until two Senate in January make clear whether they’ll retake control of the upper chamber. That would allow Biden, Pelosi and Senate Democratic leader to push ahead with their own plan.

In the meantime, Senate Republicans will be able to block the scale of spending that the Trump administration was negotiating with Pelosi last month -- about $1.9 trillion. Democrats had been holding out for even more, at $2.4 trillion, down from a $3.5 trillion plan back in May.

“Something smaller, rather than throwing another $3 trillion at this issue, is more appropriate,” McConnell said Friday after the October employment report showed the U.S. jobless rate fell by a percentage point to 6.9%, a bigger decline than expected. “That, I think, clearly ought to affect what size of any rescue package we additionally do.”

Senate Republicans had proposed $500 billion in relief assistance, which Democrats blocked, calling it insufficient. Key areas of disagreement have been the scale of aid to state and local governments, language on a national coronavirus testing and tracing program, liability protections for companies, and tax credits for lower-income households.

For its part, the White House appeared to be walking back on its endorsement of a giant package.

“We’re not interested in, you know, two or three trillion,” White House economic adviser told reporters Friday morning. “It would still be a targeted package to specific areas” that the administration wants, he said.

The lack of immediate, new virus aid escalates danger to the U.S. economic recovery, and could leave the nation’s health care system shorthanded as cases of Covid-19 spike heading into winter -- creating even stronger headwinds for Biden during his first 100 days as president.

Federal Reserve Chair said Thursday the resurgence in virus cases was “particularly concerning,” and reiterated his call for fiscal support.

One vehicle for at least some Covid-19 assistance is a vital spending bill that will be needed to avoid the federal government shutting down on Dec. 11, when current funding runs out. Pelosi said on Friday that rather than a short-term stopgap measure she favored an omnibus spending bill to complete the appropriations process for the fiscal year through next September.

If Trump did want to push a large stimulus this year as a departing legacy item, along the lines of the $1.9 trillion bill he recently offered to Pelosi, he’ll have trouble bringing many GOP senators along. At least 13 would be needed to pass any bill given the 60 vote requirement in the Senate.

“He has no political capital to spend with Senate Republicans to speak of,” said , a former top aide to McConnell. “You might get a smaller bill as a temporary bridge to a bigger bill in 2021 under a Biden presidency.”

If Trump is unwilling or unable to forge a lame-duck deal, Biden advisers have made clear that the new president would focus on getting a package before the Congress when he takes office.

, an economic counselor to Biden, predicted the president-elect would begin working on a recovery package quickly during the transition.

“Biden has been here before. It wasn’t an accident that the Recovery Act passed less than four weeks after Obama got into office” in 2009, said Bernstein. “I’m sure that muscle memory is very much alive for him.”

Bernstein said that Democrats should still try to get a stimulus bill passed into law before January, but he doubted that Trump would be interested in making a deal.

“Economic support and savings are fading fast, so it’s essential that the government fulfill priorities as soon as possible -- like, yesterday,” he said. “That’s virus control and stimulus.”

Kumar, now with , predicted that Biden could find the 60 votes needed to pass stimulus if he made concessions on items like business liability protections that McConnell has pushed.

“There are a whole host of plausible circumstances where you would get” the needed Republican votes, he said.

But Republicans will face pressure from conservative activists not to deliver Biden a major legislative victory, especially one that would add to an already record budget deficit.

“My advice toward Senate Republicans is to take the approach to a Biden presidency that they did toward Clinton and Obama -- which was don’t give them any votes for truly bad pieces of legislation,” said anti-tax activist .

“Why would you put your fingerprints on something that is just a massive bailout for corrupt mayors and incompetent governors?” Norquist said, adopting a common Republican talking point about state and local aid.

Still, Biden spent decades in the Senate and formed relationships that could help him persuade GOP holdouts.

“We have to acknowledge, based on past precedent, that things like this get held over into the first month of the new administration,” said , an adviser at the U.S. Chamber of Commerce.

He predicted that there would be enough Republican votes to carry a trimmed-down Biden stimulus bill, especially since at least 18 GOP senators are currently slated to be up for re-election in 2022.

“Being part of the solution for two years might be a good thing,” said Bradley.