President-Elect Joe Biden’s interest in boosting domestic manufacturing is a good sign for companies that want to see a temporary tax policy known as full expensing extended or made permanent.

Businesses have long been allowed to deduct investment costs, but the 2017 tax law temporarily allows the immediate write-off of costs associated with the purchase of capital goods, including manufacturing equipment. The provision is set to start phasing out after 2022 and expire at the end of 2026.

That kind of capital investment is at the heart of the manufacturing industry, where companies regularly purchase various new equipment needed to competitively produce goods. Writing off the cost of those purchases allows companies, especially smaller manufacturers, to upgrade without taking a hit to capital that could be used for labor or raw materials.

Biden’s campaign platform called for reversing much of the tax law, one of President Donald Trump’s signature achievements, which could be hard to achieve if Congress is divided after a pair of January Senate runoffs. Yet the Biden campaign also suggested a focus on policies to increase domestic manufacturing, something observers say bolsters the chances that full expensing will stick around past the current sunset dates. 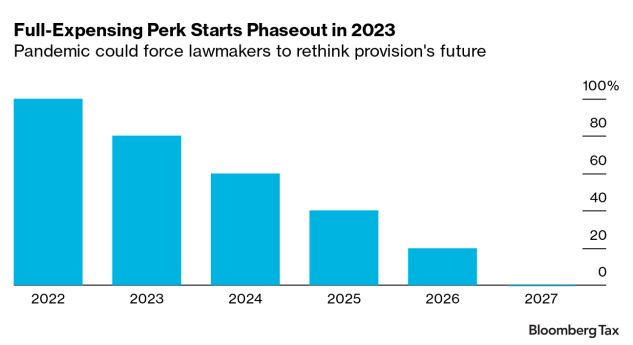 The issue is a priority for the National Association of Manufacturers, according to Chris Netram, the association’s vice president of tax and domestic economic policy. The trade group’s Board of Directors includes more than 200 corporate executives, including representatives from Dow Inc., Caterpillar Inc., and Toyota Motor North America.

Central to the group’s strategy is convincing lawmakers that tax-related policies like full expensing and curbing research and development amortization are key to an economic recovery for manufacturers, Netram said.

“We think the answer is to create a way to incentivize additional industrial investment in the U.S., and taxes is a key part of that, of making the U.S. the most attractive place to start and grow and continue a manufacturing business,” Netram said.

Myron Moser, chairman of Hartfiel Automation, a Minnesota-based manufacturer, is waiting to see what happens. He told Bloomberg Tax he hopes the 2022 phase out gets pushed down the road.

“At the very least, let’s make sure that the recovery is solid before any phase out starts to happen so it doesn’t take the wind out of the sails of the economic recovery,” Moser said.

Many Senate Republicans wanted to extend full expensing even before the pandemic spread across the country.

Sen. Pat Toomey (R-Pa.) introduced legislation (S. 3296) in February to make the provision permanent, something he said would give manufacturers and businesses the certainty to plan investments. The bill currently has 18 Republican co-sponsors in the Senate, while a House companion (H.R. 6802) introduced in May in has garnered 67 co-sponsors.

The Biden transition team didn’t respond to a request for comment, but House Ways and Means Chairman Richard Neal (D-Mass.) said he has been talking to them about ways to encourage manufacturing.

Neal said he was willing to look at making full expensing permanent as part of a broader conversation on manufacturing opportunities. That process is a bit more complex, he said.

“What I’ve been doing is, I have been talking with the Biden administration as to how to proceed,” Neal said in a recent interview. “They are interested in proceeding, but I think it’s a full acknowledgment that we need to return to, to bring those jobs back for domestic manufacturers.”

Any legislative push on full expensing would need to compete with other priorities in Congress and win the support of Democratic lawmakers who have spent the past three years complaining about the Republican-led tax law.

While boosting manufacturing is popular among both parties, there isn’t a consensus whether full expensing is the most effective way to do that.

Some, like Tax Foundation economist Erica York, have suggested that the full expensing should include buildings and structures. Currently policy requires that businesses depreciate investments in new factories or buildings over 39 years.

“Structures comprise more than three-fourths of the private capital stock, meaning that an improvement to the tax treatment of this asset class would likely have a large economic impact,” York wrote.

There are also some who feel that there could be more effective stimulus tools, especially since the provision doesn’t start phasing out for another two years.

Senate Finance ranking member Ron Wyden (D-Ore.) said that permanently extending the perk “would be totally inadequate and do nothing for businesses struggling now.”

Wyden said he wants to focus on direct aid to small businesses, either by direct payments or the employee retention tax credit.

Samantha Jacoby and Kathleen Bryant of the Center on Budget and Policy Priorities wrote in June that having the full tax break available after 2022 would discourage investment in the short run.

“These policies—generally referred to as ‘bonus depreciation,’ of which full expensing is the most aggressive variation—have not been particularly effective at boosting investment and stimulating the economy during a recession,” Jacoby and Bryant said.

“What we saw with bonus depreciation was that these senators on a bipartisan basis from Rust Belt states—those upper Midwest states that we’re all sort of constantly obsessed with in the presidential years—they all came together,” said Metcalf.

The ongoing discussion about onshoring or reshoring manufacturing in the United States, especially of items critical to national security, will bring attention to the full expensing provision, Rohit Kumar, a former top aide for Senate Majority Leader Mitch McConnell (R-Ky.) who is now with PwC told Bloomberg Tax.

Dave Koenig, vice president of tax at the Retail Industry Leaders Association, indicated that pressure will build on Congress and the White House to act on full expensing as we get closer to the phase out date. Koenig’s organization counts dozens of major retailers as members, including Best Buy, Target, and The Home Depot.

“In 2021, I’m not sure there will be a great chance to get that get that done,” Koenig said. “That certainly doesn’t mean we won’t support efforts to do so, but there are a couple couple of items that are due to expire at the end of 2021 which will probably be more top of mind to Congress.”

To contact the reporters on this story: in Washington at kbasu@bloombergtax.com; at dhood@bloomberglaw.com