Large insurers are setting aside billions of dollars in the first quarter under a new accounting standard designed to help investors gauge their lending risk.

The new standard, known as the current expected credit loss accounting method (or CECL), makes companies reserve for potential loan losses up front, instead of waiting for when the factors show the loan will go delinquent. Although it was focused on banks that make loans, it also applies to insurers which buy and sell loans on the secondary market to diversify their investment portfolios.

The tougher standard meant that three of the biggest public, multiline insurance companies alone—AIG Inc., Prudential Financial Inc., and MetLife Inc.—had to set aside $1.6 billion in reserves in the first quarter, a number that could swell under a pandemic-fueled recession. The rising numbers, however, are still viewed as largely inconsequential by many analysts given the total values of the conglomerates.

CECL went into effect for large public companies on Jan. 1.

“Any number with a life insurer is going to look large, when it comes in now is just simply a function of the business,” John Barnidge, managing director at Piper Sandler said.

But the higher reserves may come in handy if the U.S. falls into a deeper recession as a result of the coronavirus pandemic or future recessions, said Mark Dwelle, an analyst at RBC Capital Markets LLC.

“To the extent that we ultimately have some type of a broader recession that ultimately results in credit impairments, the notion is that these provisions should help cushion that to at least some extent,” Dwelle said. 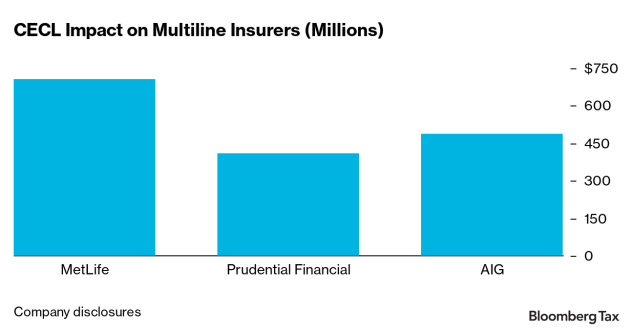 How Insurers Use CECL

In addition to loans on their books, reinsurance receivables are also included in insurers’ CECL estimates.

Reinsurance is an extra layer of coverage that insurers use to protect their businesses from massive losses. Like businesses and individuals, insurance companies buy reinsurance policies to help them cover losses from catastrophes like natural disasters.

When disasters hit, insurers pay out claims to policyholders, incurring business losses largely expected in the insurance industry. But when losses reach certain levels, reinsurers pay claims to insurance companies for policies those companies hold so their losses don’t pull them under.

Dwelle said some loan loss reserves may increase immediately after a large catastrophic event, but they are expected to drop after the reinsurer pays.

Giant property and casualty insurer AIG recorded an after-tax impact to retained earnings of $487 million as of Jan. 1. In its latest quarterly regulatory filing, the company said the amount was “primarily driven by commercial mortgage loans, and, to a lesser extent, reinsurance receivables and recoverables.”

“When individual loans no longer have the credit risk characteristics of the commercial or agricultural mortgage loan pools, they are removed from the pools and are evaluated individually for an allowance,” the company said.

MetLife reported a balance of $707 million set aside for credit losses at the end of the first quarter, but the company also reported unrealized gains of $32 billion its investments portfolio, which limits exposure to ultimate loss.

Like banks’ long-term loans and assets, insurers’ estimates are unlikely to fluctuate significantly now that companies have completed the hard part of adjusting to the new standard.

“For the most part, the numbers are going to be relatively stable now that the provisioning has been done,” Dwelle said.