April 7 is National Beer Day. The unofficial holiday (sorry, you won’t get the day off) marks the date that beer was allowed to be legally manufactured and sold following a long, dry Prohibition. On March 22, 1933, President Franklin Roosevelt signed the Cullen–Harrison Act into law, which moved the U.S. away from Prohibition. After he signed, Roosevelt reportedly remarked to his aide Louis Howe, “I think this would be a good time for a beer.”

Prohibition—which remained in place for a few more months—reportedly cost the federal government $11 billion in lost tax revenue, not counting the cost of enforcement. 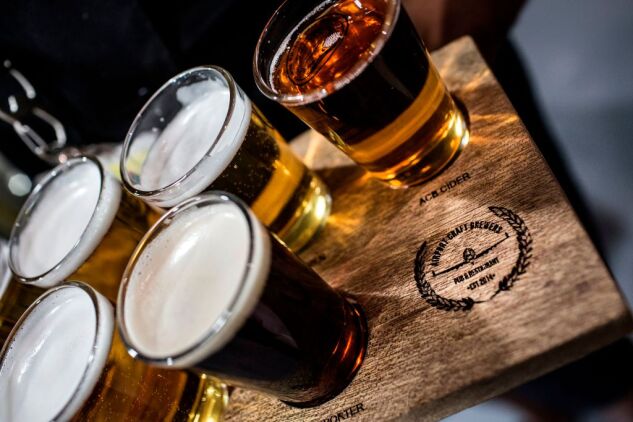 A few of the brews available at the Airport Craft Brewers at OR Tambo International Airport in Johannesburg. Photographer: Gulshan Khan/AFP via Getty Images

Here are a few more facts about beer—and its close relationship to tax—to help you celebrate in 2021:

Egypt was likely the first civilization to tax beer. Queen Cleopatra imposed a tax on beer to, she claimed, discourage public drunkenness, though it is believed that the tax was used to raise money to finance her wars.
Beer is the most popular alcoholic beverage in the United States. According to a 2019 Gallup poll—the last year the survey was conducted—38% of Americans who drink alcohol said they preferred beer, a few percentage points lower than in 2018. In 2019, the federal government collected $3.4 billion in excise taxes on domestic and imported beer.

Beer taxes aren’t insignificant. In the U.S., taxes on the production, distribution, and sale of beer typically eat up 40% of the retail price.

The pandemic impacted online beer sales. Covid may have hit the entertainment industry hard, but online sales of beer were up. In 2020, total online beer sales increased by 233%. Beer sales totaled more than $43.7 billion in U.S. multi-outlets, a 14.7% increase over 2019.

Poorer households pay a disproportionate amount of beer taxes. According to a report presented to the Senate, U.S. households earning less than $50,000 make less than one-fourth of all income earned in the country but pay half of all beer taxes.

To help pay for the Civil War, Congress imposed an excise tax on beer. The Revenue Act of 1862, signed into law by President Abraham Lincoln, referred to the word beer 23 times, and included a tax on “all beer, lager beer, ale, porter, and other similar fermented liquors, by whatever name such liquors may be called.” The Act also established the Office of Internal Revenue within the Department of the Treasury—what we now know as the IRS.

Beer is considered a luxury for tax purposes. In 1991, President George H.W. Bush signed a law that increased taxes on luxuries such as furs, yachts, private jets, jewelry, and expensive cars. It also nearly doubled the tax on beer, the largest single increase in the federal tax on beer in U.S. history. Bush called for the repeal of the tax two years later, and while most of the taxes included in the bill were eventually repealed, the tax on beer remained in place.

The Tax Cuts and Jobs Act (TCJA) reduced the federal excise tax on beer. But there was a catch: while many TCJA-related changes were set to expire in 2025, the changes affecting the beer market were slated to sunset in 2020. Fortunately for the beer industry, as part of the Taxpayer Certainty and Disaster Tax Act of 2020—one of the Covid stimulus packages—the reduced rates were made permanent.

Bier ist kompliziert (Beer is complicated). German beers are often labeled “Gebraut nach dem Bayerischen Reinheitsgebot von 1516,” which translates roughly to “brewed according to the Bavarian Purity Law of 1516.” The law originally limited the ingredients used to make beer in Germany (barley malt, hops, yeast, and water). The Reinheitsgebot became an official part of the German tax code in 1919—the same year we ratified Prohibition—but was largely gutted when Germany became part of the European Union in 1987.

Guinness employees are entitled to free beer. That’s been a perk since 1759—at one point, the allowance was two pints per day for every male employee over the age of 21. In 1996, the Irish Revenue Commissioners opted to tax the benefit: at the time, the levy on 24 bottles or cans of Guinness, Harp, Smithwicks, or Kilkenny every three weeks worked out to $37 per year. According to The Drinks Industry Group of Ireland, the drinks and broader hospitality sector employs nearly 8% of the Irish workforce.

All 50 states and the District of Columbia impose some kind of tax on beer. The most expensive state to buy a beer may be Tennessee, where state excise taxes were $1.29 per gallon in 2020, making it the highest in the country, according to the Tax Foundation. The cheapest state? Wyoming, where the excise tax is just $.02 per gallon. You can see where your state ranks here.

Qatar introduced a 100% tax on alcohol in 2019. The country’s so-called sin tax, which according to the General Tax Authority is “designed to impose taxes on certain health-damaging goods,” has boosted the cost of a case of beer to more than $100. State coffers are expected to boom as tourists flock to Qatar next year for the World Cup.

Cenosillicaphobia (sen-no-sill-ick-uh-fobia) is the fear of an empty beer glass. Okay, that’s not a tax fact, just a fact. Don’t live in fear: get yourself a beer.

This is a weekly column from Kelly Phillips Erb, the TaxGirl. Erb offers commentary on the latest in tax news, tax law, and tax policy. Look for Erb’s column every week from Bloomberg Tax and follow her on Twitter at @taxgirl.

To contact the reporter on this story: Kelly Phillips Erb in Washington at kerb@bloombergindustry.com

To contact the editors responsible for this story: at rdaigle@bloombergindustry.com; at skassam1@bloombergtax.com

Kelly Phillips Erb
Editor
Amending Your Tax Return When Your Filing Status Is Complicated
IRS Tool Can Stop Thieves From Stealing Your Tax Refund
When Is a Tax a Tax and Not a Penalty?
© 2021 The Bureau of National Affairs, Inc.
All Rights Reserved