Dell Technologies is among the companies aided by a local tax sharing agreement in Texas.
Photographer: Michael Nagle/Bloomberg

Texas cities are at odds over a proposal from the state comptroller to curtail deals that give companies includingand , substantial chunks of their local sales tax collections as incentives to locate or stay there.

Comptroller Glenn Hegar’s (R) proposal would stop deals that base the local sales taxes paid with e-commerce purchases on where a company’s sales office or warehouse is located, instead of on the customer’s location. Hager says those deals concentrate sales tax revenue within the borders of at least a dozen cities and take it away from others.

“Texas taxpayers are paying local sales taxes that are used in cities where they have absolutely no rights as taxpayers,” Hegar said at a Feb. 5 hearing before the Texas House of Representatives Ways and Means Committee. “This is the ultimate case of taxation without representation.”

The changes are included in a broader regulatory proposal for out-of-state sellers and marketplaces like eBay Inc. and Amazon.com to comply with the U.S. Supreme Court’s 2018 ruling in South Dakota v. Wayfair. That ruling eliminated the requirement that sellers have a physical presence for a state to impose sales tax collections.

Texas’s tax sharing deals are similar to ones in more than 20 cities in California, which last year approved legislation requiring more disclosure about the deals’ terms. The state acted after a Bloomberg Tax investigation found agreements that have sent tens of millions of dollars a year back to Best Buy, Apple Inc., Staples, Home Depot and others. Gov. Gavin Newsom (D) vetoed a second bill that would have banned new deals altogether.

As in California, Texas’s deals hinge on the allocation of local sales taxes the cities levy on top of the statewide rate, which is 6.25%. Texas cities can impose sales taxes for general or specific purposes in increments as small as one-eighth of 1% as long as they add up to no more than 2%. Most of the cities are paying the companies with their general tax revenue, which is typically a 1% increment of the total, Bill Longley, legislative counsel to the Texas Municipal League, said in an interview.

In exchange for locating a warehouse, sales office, or headquarters in a city and assigning all sales made within Texas to that jurisdiction, local leaders agree to give back a percentage of the sales tax revenue to the companies—sometimes for decades. Even with millions in payments to the companies, the cities say they still come out ahead because they keep a portion of the added taxes collected. 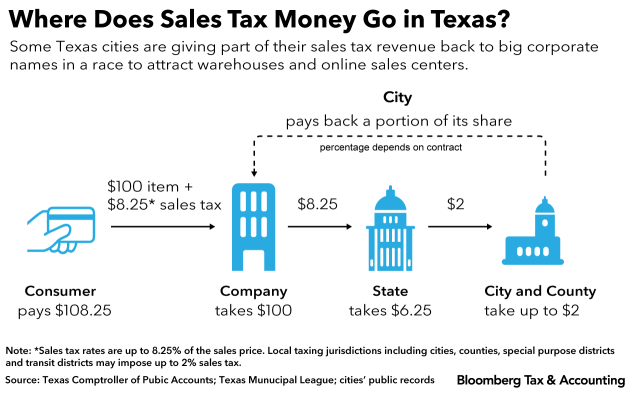 No one is sure how many deals exist in Texas or how much revenue is going back to the companies, but Hegar says they are on the rise as online shopping grows.

“The proliferation of these agreements will accelerate rapidly,” he said.

In Dell’s case, a 1993 deal with the computer giant’s hometown of Round Rock, near Austin, gives the company 62.5% of the local sales tax it generates until 2053. City leaders say the deal convinced the company not to move to Nashville or Ireland.

Round Rock gives Dell about $10 million a year, City Attorney Stephan Sheets told lawmakers. If the comptroller’s rule takes effect, Round Rock will lose at least $30 million a year in tax revenue from Dell. Sheets didn’t respond to requests to confirm those figures.

The city may be forced to increase property taxes to make up the difference and could face a downgrade in its bond rating, he said.

The city of San Marcos, which sits between Austin and San Antonio, reached an agreement with Best Buy in 2017 to locate its statewide sales office for online, app-generated, and phone sales. Best Buy didn’t operate in the city before the agreement was reached, San Marcos Finance Director Heather Hurlbert said.

San Marcos takes in about $8 million in taxes a year on those sales and gives 75% of it back to Best Buy, she said. The money the city keeps is 5% of its annual general fund and covers its library budget of $1.9 million, she said.

Best Buy’s agreement expires in 2026 but can be renewed automatically for two more 10-year terms if the company maintains at least 50 jobs that pay $15 an hour or more, she said.

A Best Buy representative didn’t respond to a request for comment.

San Marcos and Round Rock officials oppose Hegar’s proposal, as do officials from several other cities that have deals. Coppell, near Dallas-Fort Worth Airport, has agreements with office supply retailers Quill Inc. and Staples Inc., and industrial supplier Uline Inc. New Braunfels, a few miles from San Marcos, has a deal with industrial supplier HD Supply Holdings Inc. Officials from those two cities spoke against the proposal at the legislative hearing.

Palestine Mayor Steve Presley is among several city representatives who support the rule. Sales tax revenue in the rural town 150 miles north of Houston has stayed flat in recent years despite the addition of 1,600 jobs from a new chicken processing plant and a call center, he said in an interview. He attributes the lack of revenue growth to the tax agreements in other cities and the rise in internet shopping.

“If I sit in my living room and order something and have it shipped to my house my city should get the sales tax revenue,” Presley said.

Hegar has extended the comment deadline on the Jan. 3 proposal from Feb. 17 to April 3 after several legislators asked for more time, spokesman Kevin Lyons said.

Cities with tax sharing agreements in effect before Sept. 1, 2019 that don’t satisfy the new rules would have until Dec. 31, 2022 to end them.

With cities on both sides of the issue, the Texas Municipal League is staying neutral on the comptroller’s proposal, Longley said. The rule will create winners and losers among Texas’s 1,200 cities because taxes that now get concentrated in one city would instead go to cities throughout the state, he said.

“Nobody is very clear as to why he’s doing it exactly now,” John Kennedy, a senior analyst for the taxpayers association, told Bloomberg Tax. “The only thing we do know is the cities that are going to be negatively-impacted like Round Rock are going to have a very significant financial hit.”

The tax deals aren’t helping communities, but do allow one city to steal tax revenue from another so it can give it to the companies, said Nathan M. Jensen, a professor of government at the University of Texas at Austin who studies economic development.

“These sales tax deals look less like economic developments and more like a tax haven,” Jensen said in an email. “Companies are gaming the system to record all of their sales in one place. And cities are playing along.”

-with assistance from Paul Stinson in Austin