Critics warn they are ready to sue Colorado over its newly formalized stance that downloaded and streamed digital products are to be taxed as tangible personal property.

The state Department of Revenue’s Division of Taxation recently adopted amendments to its tangible personal property rule that will impose the state’s sales tax of 2.9% on streaming and downloaded digital goods. The Digital Goods Rule is set to take effect Jan. 30. The changes specifically include monthly subscription fees for streaming services of movies and television shows like those on Netflix, Hulu, Disney+, and Apple TV+. The method of delivery—for example, by compact disc, electronic download, or streaming—does not impact the taxability of the sale, the regulation says.

The burgeoning marketplace for digital goods and services and the money that states can generate from taxing such activity are driving Colorado and other states to clarify their rules. Out of 45 states that impose a sales tax, about 30 specifically tax digital goods, according to Gail Cole at tax software company Avalara. Streaming taxes, often called ‘Netflix taxes,’ exist in Washington, Pennsylvania, and North Carolina and are being considered by other states in addition to Colorado.

“We stand ready to sue given the disregard of the law,” said Stephen Kranz, Washington, D.C.-based partner with the law firm of McDermott, Will & Emery LLP. Colorado’s Digital Goods Rule is a discriminatory tax on electronic commerce barred under the Internet Tax Freedom Act, expanding the scope of the statutory definition beyond what was intended by the Colorado General Assembly, Kranz said in written comments submitted prior to a rulemaking hearing held in late June. 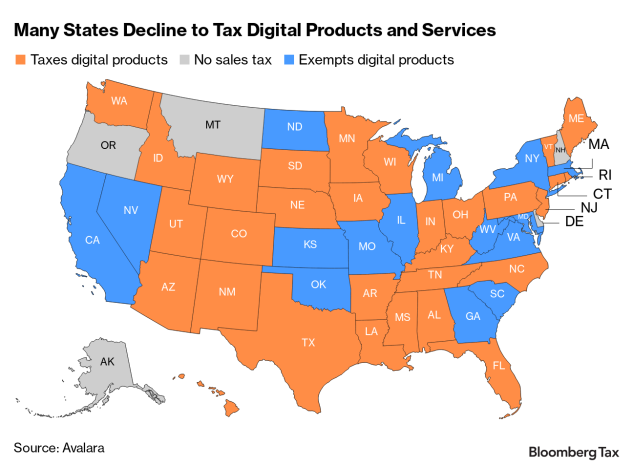 Kranz, who has represented Microsoft and Apple in litigation, called Colorado’s move “wrongheaded.”

The amendments are a tax policy change under Colorado’s unique Taxpayer Bill of Rights, a 1992 state constitutional amendment that requires voter approval for tax increases, according to Kranz.

A spokesman for Netflix said Friday the company had no comment. Other companies that provide streaming products, including Hulu, Google and Apple, could not be reached.

After the June rulemaking hearing, the department concluded the amendments were consistent with the constitution and state law, said Josh Pens, the department’s director of tax policy.

“We litigate in the gray areas often, if not frequently,” he said. “I wouldn’t be a surprise for that or any other gray area, where we’re clarifying ambiguities and gaps ... certainly it would not surprise us if a taxpayer initiated litigation.”

In mid-December, the Colorado Office of the Attorney General reviewed the rule and found “no apparent constitutional or legal deficiency in their form or substance.”

If Colorado is sued, it could argue what it’s doing is the antithesis of violating the Internet Tax Freedom Act, said Chuck Maniace, vice president of regulatory analysis and design at tax compliance software company Sovos.

“It puts traditional sellers and providers of digital equivalents on the same playing field,” he said. “It’s consistent with where the world is going, taxing the personal property at the point where the digital good is consumed.”

Phil Horwitz, director in the Denver office of the accounting firm Moss Adams LLP, said he sees both sides of the issue. The state is essentially saying that downloading or streaming a digital good, and then running it on a user’s digital device—however temporarily—is like buying or renting a movie from a video store.

But companies like Apple that provide access to digital products through subscriptions to streaming services have argued that such activity is not subject to tax and shouldn’t be treated as in-store purchases, he said.

The department has been debating treatment of digital goods for some time, Horowitz said. “It’s where the money is,” he said. “You have to go after it where the transactions are happening.”

Colorado’s recent revisions are not a major departure from the state’s law, Maniace said. “In the last couple of years Colorado has taken a pretty clear view that the digital equivalents of tangible personal property are taxable,” Maniace said.

Colorado is trying to “future-proof” its rule so it provides for innovations that come after streaming, Maniace said. States have added clarifications to their rules by specifying their sales tax applies to downloaded software, then to cloud services, then streaming.

“This way their tax approach will be ready for what comes next,” he said.