Quebec offers a model for states to go after taxes unreported by cash-based businesses.
Photographer: Paul Taggart/Bloomberg via Getty Images

The states and the Internal Revenue Service annually lose out on an estimated $30 billion in sales and income taxes from bars and restaurants because they can’t adequately police the firehose of transactions flowing through these cash-based businesses.

The huge shortfall is tied to the prevalence of “zappers,” software applications loaded into electronic cash registers that evade taxes by voiding cash transactions. Business owners and employees pocketing cash from the till, known as “skimming,” also contribute to the widening tax gap. Neither problem is new, but there is at least one solution being touted by the Canadian province of Québec, with promising results.

Using mandatory invoicing and cash register monitoring, Québec has dramatically reduced tax evasion from restaurants and bars. Its program, which is now being expanded, has generated $2.1 billion over eight years, a noticeable impact for a region with roughly the population of Virginia.

“Certainly, within Canada, Québec is leaps and bounds ahead of any other tax authority, including our federal Canada Revenue Agency,” said Lindsay Tedds, a professor of economics at the University of Calgary and an authority on tax compliance. “Moreover, Québec is a world leader at fighting zappers and sales tax evasion.” 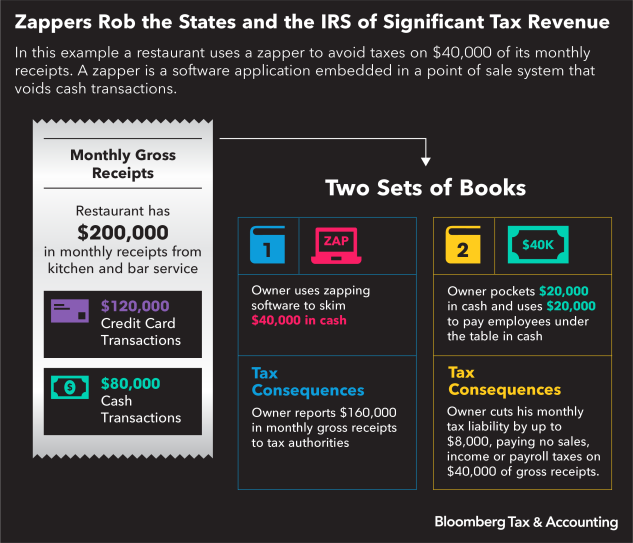 Proper accounting and invoicing in the food and drink industry has been a problem since the birth of the tax code. Business owners may be tempted to under-report their receipts, particularly from cash transactions, which are difficult for auditors to trace, said Michael Paz, a professor of accounting at Cornell University’s School of Hotel Administration.

Sales suppression reduces a business’s overall exposure to state and local sales taxes, local restaurant excise taxes, and state and federal income taxes, Paz explained. In cases where the restaurant owner uses the cash to pay employees under the table, the business may also violate a whole host of payroll tax rules.

Zappers, operating from a memory stick, removable disk, or internet connection, allow a business to zap, or delete, selected sales. The systems then recalculate individual receipts and the taxes due. The most sophisticated systems also reconcile differences with the restaurant’s other financial records to hide evidence of the fraud.

“The tax gap is huge, and it will only get bigger if they can’t figure out how to implement systems—common in other jurisdictions—that attack compliance failures before they can happen,” said Richard Ainsworth, an adjunct professor at New York University Law School and an authority on tax fraud.

Manufacturers of point of sale systems aren’t strictly responsible for the zapping problem, but Ainsworth said too many of them have simply “left the back door open.” In this regard, he said between 30% and 50% of the electronic cash registers operating in the U.S. can accommodate zapping if an unscrupulous vendor offers to connect the zapping application to the hardware.

Skimming is more common, particularly in the 352,000 independent restaurants across the country, said Paz. He described skimming as an array of both deliberate and unintentional practices to remove sales transactions from a business’s internal records.

Sales suppression from zappers and skimming are costing federal and state governments plenty. While the exact size of the tax gap hasn’t been identified, numbers estimating the annual sales, income, and payroll tax losses come into focus using estimates of the tax evasion rate and comparisons with jurisdictions that have solved the problem.

Québec’s Ministère des Finances did a close analysis of the tax evasion rate for restaurants and bars prior to the implementation of its mandatory monitoring system in 2011. The ministry found an “escape rate” of 17.5% across the restaurant sector and 18% across bars, causing tax losses of roughly $400 million annually. Similarly, a study by the economic analysis firm Performance Economics estimated the sales tax evasion rate for the U.S. restaurant industry at 19%.

Applying those 17.5% and 19% evasion rates across the $780 billion U.S. food service and drinking industry suggests between $136.5 billion and $148.2 billion of the industry operates in the dark economy. If taxes had been properly collected from these dark economy transactions, state and federal coffers would be richer by roughly $27.3 billion on the low end, or $30 billion on the high end.

Both Ainsworth and Paz said the analysis is reasonable. Ainsworth’s own suggests a tax gap of $21 billion. Paz estimated the escape rate across U.S. restaurants and bars is likely higher than 17.5%.

Canada’s model has failed to gain traction in the U.S., in part because of industry opposition and doubts about its feasibility.

The Council on State Taxation (COST), representing the interests of large U.S. retailers, said it doubts Québec’s model would be a workable solution in the U.S., which has more than 11,000 distinct sales tax jurisdictions.

Real-time cash register monitoring, which creates a tamper-proof set of transaction records for revenue agencies to review, might be a good option for businesses with consistent compliance problems, said COST’s senior tax counsel Patrick Reynolds. But requiring tens of thousands of businesses in each state to install and maintain such systems would likely be an exercise in “swatting a fly with a bazooka.”

Instead, the IRS and the states have generally attacked the tax gap through audits. Thirty of the 45 states that impose a sales tax have criminal zapper statutes that can level felony charges against anyone who knowingly sells, buys, installs, or possesses any automated sales suppression device. Using these laws and other criminal statutes, prosecutors have brought cases against individuals in several states, including Connecticut, Illinois, Massachusetts, Michigan, Minnesota and Washington.

Going after businesses that use sales suppression devices is a matter of fairness, states have emphasized when filing enforcement actions. Restaurants that use zappers harm others that report and pay their proper share of taxes.

“Businesses that cheat to pay employees under the table or to pay other expenses causes honest businesses to often times struggle to stay in business,” said Mike Chertrude, an audit director with the Department of Revenue in Washington, the only state that has experimented with Québec’s real-time monitoring model. The theft of sales tax also “hurts Washington residents because there is less money to pay for emergency services or other government services Washingtonians expect and should be able to receive.”

Still, the states and the IRS remain several steps behind the fraudsters, Ainsworth said. Audit resources have been declining for many years and auditing is a resource-intensive process that often ends with revenue agencies settling for a small percentage of the tax avoidance. And despite the flurry of state laws criminalizing zappers, very few cases have been prosecuted.

“Revenue departments are being outsmarted and outgunned on several different fronts, leaving them to collect dimes on the dollar if they have the time to audit restaurants,” Ainsworth said.

It’s a perennial headache for states, said Richard Cram, a former Kansas Department of Revenue official and now the director of the National Nexus Program at the Multistate Tax Commission, an intergovernment agency dedicated to state tax policy uniformity. “It’s an area states have to monitor closely, and they probably don’t have the resources to monitor as much as they need to. It’s a chore for sure.”

Christopher Thomsen, a retired IRS special agent who worked on a Chicago-based task force that revealed a dozen tax zapping frauds, conceded federal and state revenue agencies are unable to keep up with current levels of illegal conduct.

“There are a lot of dollars out there, but it’s difficult for the IRS to recover because of all of the impediments,” he said. “You think about the different POS systems, the zapping, the deletions, and the many strategies people have to impede audits.” 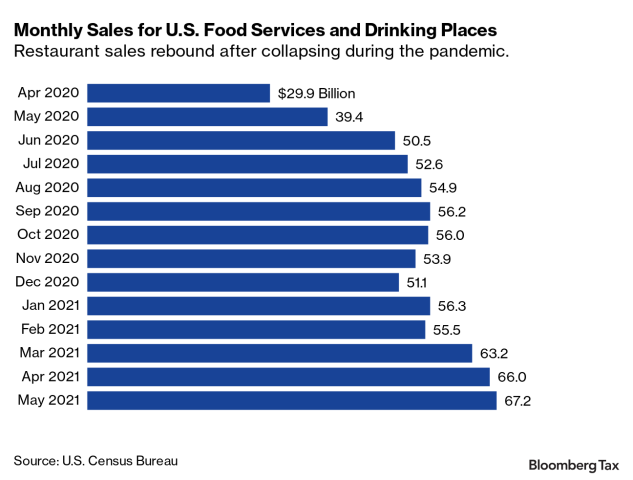 Instead of chasing tax dodgers after a crime is committed, Québec’s approach attacks sales suppression before it can start, said Martin Croteau, a spokesman for Revenu Québec.

The province committed to a mandatory billing program designed to squeeze tax fraud out of the restaurant industry beginning in November 2011 and the bar sector in February 2016. Québec mandated and subsidized the deployment of 40,000 “sales recording modules,” tamper-proof microcomputers attached to every electronic cash register. Each SRM has the capacity to store sales records in a secure memory, generate invoices bearing a unique digital signature, and produce summary reports for inspection by Revenu Québec. 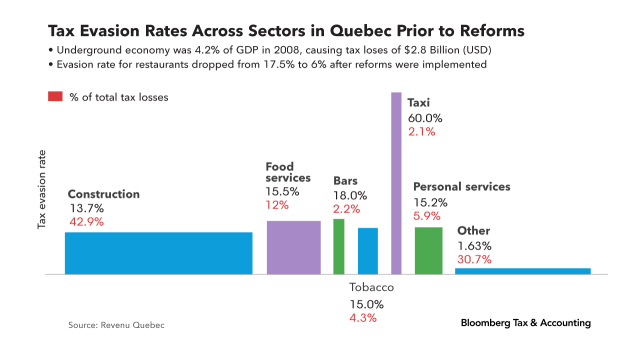 The government then implemented strategies to ensure understanding and compliance, Croteau said. Businesses were required to immediately provide receipts to customers after every transaction. Revenu Québec was required to conduct a public awareness campaign to educate consumers and conduct periodic inspections to collect data from the SRMs.

Croteau said the program dropped the evasion rate from 17.5% to 6% in four years, and zappers have been completely eliminated from the restaurant and bar sectors. The program has also slashed the revenue agency’s compliance costs, dropping the cost for individual audits from $3,600 to $150.

Success has permitted the agency to go after fraud in other industries, Croteau said. Québec is expanding mandatory billing to the taxi industry at the end of the year, and eyeing the construction and home remodeling sectors next.

To contact the editor responsible for this story: at jharrington@bloombergindustry.com