Empty seats, pumped-in crowd noise, virtual fans, and plexiglass-imprisoned announcers mark some of the biggest differences from traditional sports to pandemic play for viewers. For players, the new sports environment is just as different for their wallets.

The income professional athletes earn in any opposing team’s state they play in over the course of a season is typically subject to those states’ income taxes, what is known as the jock tax. For states with income taxes such as California, it means hundreds of thousands in additional tax revenue for every game the Los Angeles Lakers or Golden State Warriors host. With Covid-19 forcing the NBA and NHL to play out the rest of their season in select cities, some players will avoid state income taxes altogether while others will be on the hook for much more—all depending on which state they call home.

“It’s magnifying the difference in their take-home pay after taxes,” said Tim Noonan, a tax lawyer with Hodgson Russ in Buffalo, New York, who specializes in residency issues. “I think it emphasizes the need for these players to try to establish residency in a non-tax state, because now the benefits are even greater.”

If a top-paid player like LeBron James who makes $36 million a year before taxes, moved from high-tax California to a state with no income tax such as Florida or Texas he could potentially increase his take-home pay by millions of dollars.

The out-of-state taxes professional athletes typically pay get applied to the total number of days they perform “income-related work” like play in games, team meetings, or practices in a given state. Even if a player lives in a state like Florida that doesn’t have an income tax, they still pay state income taxes for games played outside their home state.

Like many things in sports, jock taxes can be traced to Michael Jordan.

After the Chicago Bulls beat the Lakers in the 1991 NBA finals, California sought to capture some of the pay Jordan earned while playing in Los Angeles. His home-state Illinois retaliated with its own out-of-state tax, and soon the rest of the country was doing it—and the jock tax was born.

With the NBA finishing out its season in Florida’s Disney World, players who are residents of the Sunshine State will avoid income taxes altogether as they’re no longer earning pay in other states that impose income taxes. For an Orlando Magic or Miami Heat player with residency in Florida, the setup is a slam dunk for tax savings. For everyone else, it’s a different ballgame.

“Florida residents won’t have to portion any of their income to non-resident states with an income tax,” said Ryan Losi, a financial adviser and executive vice president at Piascik, an accounting firm.

Typically if a player is already paying jock taxes to the state they’re playing an away game in, their resident state lets them use a tax credit to avoid any double taxation and offset the difference in rates.

“The Orlando and Miami players will have played zero percent of time in states with income taxes, accruing massive savings,” said Nishant Mittal, senior vice president of business travel at Topia, which offers technology to help companies track employees for tax purposes. “While a player from the Los Angeles Lakers won’t pay any tax to Florida, he actually comes out net to net no different than last year” in taxes owed, he said.

LeBron James, who plays for the Lakers, will still owe California’s 13% tax on the income he makes in Florida, while someone like the Heat’s Jimmy Butler won’t owe any state income taxes, as his home state doesn’t impose one. 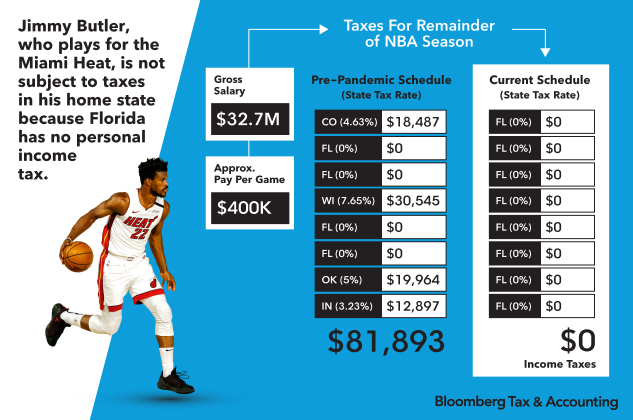 California residents will still have to pay their 13% state tax, Mittal said. If a player were playing in another income tax state, “the Lakers’ player would be able to take a credit for that tax to California to offset what he owes there,” Mittal said.

American NHL players playing out their seasons in the league’s two hub-designated cities in Canada of Toronto and Edmonton, Alberta province, could be on the hook for double the taxes.

International tax treaties will acknowledge taxes paid in Canada as a tax credit for US federal income taxes, but states vary in respect to provincial taxes.

That means hockey players who don’t hold Canadian residency could end up paying Edmonton and Toronto’s provincial rates for their pay on top of their home-state’s rates. Also, the time players who are American residents spend in Canada will rise higher than what it would be compared to a normal season—putting them on the hook for higher than usual rates.

“Double taxation for the players likely happens already on some sort of moderate level when guys on the Rangers go play the Maple Leafs in Toronto,” Noonan said. “The double tax implication for folks playing in Canada is magnified now because all the games are in Canada.”

Anyone staying over 183 days in Canada is typically liable for income taxes. Although the Canada Revenue Agency is allowing exceptions for those who can’t leave because of Covid-19, playing hockey probably doesn’t qualify, Losi from Piascik said.

Major League Baseball’s decision to forgo fixed game locations and play the rest of its season in a condensed 60-game format won’t change most players’ taxes as they’re still traveling from city to city.

But for the Toronto Blue Jays, who are playing out home games in Buffalo, New York, instead of Toronto—after Canada denied the league’s request for an exemption to cross the closed border because of high U.S. Covid-19 rates—taxes will look different.

“It’s going to come down to where they have a closer connection to: for family, business, and then ultimately, their nationality,” Losi said. “I think as long as they’re treating themselves as Canadian residents, then they’ll get out of U.S. taxation.”

Those Blue Jays players who are American residents should save money as New York imposes less income taxes than Canada, but Canadian players could be on the hook for twice the tax, according to Noonan.

Canada’s tax-residency rules are tied to how many days you spend in the country and claiming U.S. Therefore claiming residency for temporary work travel could be difficult, and any legal challenge would be tricky, said Losi.

“I think the CRA would probably prevail,” he added.