Customers buying a variety of products at the Hee Haw Fireworks store in Goodlettsville, Tenn., on Wednesday.
Photographer: Luke Sharrett/Bloomberg

The prospect of a Fourth of July without grand fireworks shows is sending long-quarantined Americans setting off backyard displays instead—sparking noise complaints from coast to coast but a sales tax bonus for states.

Cancellation of most of the 16,000 Independence Day shows that typically happen is bad news for the display fireworks industry.The backyard shift has been welcomed, however, by sellers of firecrackers, Roman candles, and sparklers and the states that tax them.

That’s cold comfort to Kim Cavolo, a personal trainer living in Baltimore who has been plugging her ears for weeks and shielding her dog from a nightly orchestra of pops, bangs, and booms.

“One night it didn’t stop until 3 a.m.,” she said. “I got a puppy during this whole Covid thing, and she just wouldn’t go outside because it just didn’t stop.”

Higher revenue from fireworks sales—reports all over the country of backyard blasts date as far back as Memorial Day—won’t solve states’ financial problems, but could provide some insulation during a period of crisis. Georgia, Indiana, Michigan, Pennsylvania, and West Virginia stand to reap the greatest benefits based on their high fireworks excise taxes and licensing fees.

The American Pyrotechnics Association is projecting annual display fireworks revenue will plunge 80%, from the $375 million banked in 2019. Retail sales, a $1 billion industry last year, are expected to surge at least 40%.

“It’s all very strange, we’ve never seen anything like it,” said Julie Heckman, executive director of the association. “With the widespread cancellations, these small family businesses are fighting for survival. But for the flip side of our industry, the sales are off the charts for backyard consumer fireworks.”

Jim Souza, chief executive of Pyro Spectaculars, said the pandemic has had a “devastating” impact on the Rialto, Calif.-based business. The company, which produces and presents fireworks displays around the world, had planned to do more than 400 Independence Day shows this year. That number has shrunk to roughly 40. And since mid-March, Pyro Spectaculars has lost contracts for hundreds of concerts, weddings, trade shows, and public celebrations.

“We’ve lost baseball, sporting events, Princess Cruise Lines, the Hollywood Bowl concert series, the Rose Bowl, several large extravaganzas for the Fourth of July, and even high school graduations,” Souza said. “They are all social gatherings. We’re in the public display business, and it’s all ended.” 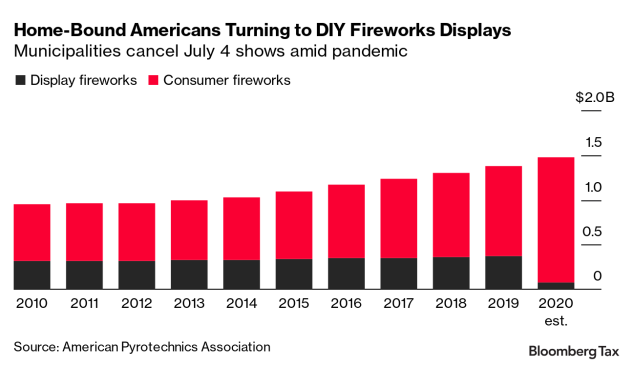 These trends have tax implications for both the display and consumer sides of the industry.

The pyrotechnics association is petitioning Congress for relief for the nation’s roughly 150 fireworks display companies. While many businesses received benefits under the Paycheck Protection Program, part of the Cares Act (Public Law 116-136), the pyrotechnics group wants additional support in the next stimulus package in the form of tax breaks and forgivable loans through the federal Economic Injury Disaster Loan program.

Additional PPP-style support is critical because the first round of assistance has largely expired, and pyrotechnics companies can’t simply lay off personnel in response to a year of canceled shows, Heckman said.

Pyrotechnics companies, she said, are literally sitting on a powder keg of explosives subject to state and federal hazardous materials rules, and heavy regulation by the Bureau of Alcohol, Tobacco, Firearms and Explosives. Experienced personnel must be available around the clock to secure these inventories.

No federal bailout will be necessary for sellers of consumer-grade fireworks, and the states will be banking on a modest bump in revenue collections. Rocketing sales are expected to goose revenue collections in every state but Massachusetts, which strictly prohibits the sale and possession of fireworks, said Janelle Cammenga, a policy analyst at the Tax Foundation, who has researched state fireworks statutes.

Revenue will be even brighter in states that impose excise taxes on fireworks, Cammenga said. Alabama, Alaska, Georgia, Indiana, Michigan, Texas, Pennsylvania, and West Virginia slap an additional tax of between 2% and 12% on fireworks sales. Several states enacted their excise taxes fairly recently in response to campaigns seeking to legalize fireworks.

More than 30 states also impose registration fees on fireworks retailers, Cammenga said. The fees range from $20 annually in North Dakota to $20,000 in Pennsylvania.

Pennsylvania imposes the highest fireworks excise taxes and registration fees in the country and stands to benefit from spiking sales. A revenue department spokesman said Pennsylvania collected $7.8 million through its consumer fireworks tax last year. The state has already banked $7.4 million for 2020, without revenue from the busiest sales period.

“There will be some additional revenue, but it’s not going to plug all the budget holes states are facing right now,” Cammenga said.

—With assistance from Colleen Murphy.