Treasury Secretary Steven Mnuchin, speaking May 19 in a cabinet meeting, has been a key negotiator for the administration as lawmakers craft pandemic aid packages.
Photographer: Kevin Dietsch/UPI/Bloomberg via Getty Images

Treasury Secretary said Congress will very likely need to pass more stimulus legislation for the U.S. economy, as the nation struggles to recover from the coronavirus outbreak.

“I think there is a strong likelihood we will need another bill,” he said Thursday at an online event hosted by The Hill newspaper -- but he also reiterated the administration’s position that more stimulus isn’t needed immediately.

“We’re going to step back for a few weeks and think very carefully if we need to spend more money and how we’re going to do that,” Mnuchin said. He said he had spoken to House Speaker last week about implementation of the $2.2 trillion stimulus Congress passed in late March.

The House passed an additional $3 trillion stimulus last week but Republicans in control of the Senate have said they won’t consider it. President and Senate Majority Leader have said they instead want to evaluate the effect of some $5 trillion already aimed at the economy by Congress and the Federal Reserve.

The Democrats’ plan is “meeting resistance in the Senate,” Pelosi said Thursday on Bloomberg TV, but “it’s just a matter of time.”

“I’m optimistic because the American people fully support what we are doing and oppose the Senate obstructing it,” she said.

Meanwhile, the economy continues to deteriorate as Americans practice social distancing to curb the spread of the virus.

Another 2.4 million people filed for unemployment benefits last week, the Labor Department reported, bringing the total to nearly 39 million since March. The two-month total is roughly equivalent to all of the initial claims filed during the Great Recession. 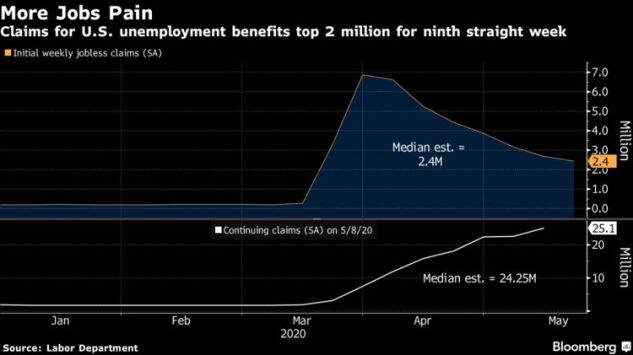 Pelosi and many Democrats have said state governments and hospitals in particular are in dire need of more federal assistance.

Several Senate Republicans have signed on to a $500 billion package of state and local aid, including Senator of Maine, who faces a tough re-election fight in November.

Another endangered Republican, Colorado Senator , has criticized plans to adjourn the Senate for a Memorial Day recess without further action to respond to the virus.

“When we come back to those negotiations as we undoubtedly will, it’s very important we move from rescue to reopening,” , the White House’s top economic adviser, said Thursday during an event hosted by the Washington Post.

“I do not believe that more government spending is going to give us a strong and durable recovery -- that’s been tried before,” he said.

Kudlow said options under consideration in the White House include a payroll tax cut, capital gains tax exclusion and easing regulations -- all part of Trump’s broader economic agenda. He said extending unemployment insurance isn’t under consideration because “many Americans want to go back to work.”

Mnuchin said he expects that in the second quarter ending in June, the economy will “bottom-out” and by the end of the year, the GDP increase will be “gigantic.”

So far, the Treasury chief has spent more than $500 billion helping small businesses, sent cash directly to American families and given federal aid to airline workers, but there is plenty of firepower left from the current rounds of stimulus.

He has only spent $37.5 billion of the half-trillion dollar pot of money for direct loans to companies and to launch multiple Federal Reserve emergency lending facilities.

To contact the reporter on this story:
in Washington at smohsin2@bloomberg.net