The coronavirus is threatening to blow a massive hole in U.S. state and city budgets as millions of people stay home, workers are idled and the stock market flounders.

New York, the epicenter of the U.S. outbreak, is projected to lose between $10 billion and $15 billion of revenue in the fiscal year that starts Wednesday. Ohio state agencies are looking to cut 20% in spending, and Cincinnati is furloughing 1,700 city workers. Georgia may have to renege on a $1,000 pay raise for teachers that state House lawmakers had budgeted for in the coming year. California is already dipping into reserves and has warned state agencies not to expect full funding next year.

States, cities and counties rely on revenue from taxes on income, sales of goods and even on gains from the stock market -- all sources of money that the virus threatens to wipe out as the U.S. is poised for a recession. Despite the unprecedented federal stimulus package that includes $150 billion for states and municipalities, officials like New York City Mayor Bill de Blasio say more help is needed to make up the funds that local governments are losing, and House Speaker Nancy Pelosi has for “significantly more” aid for states. 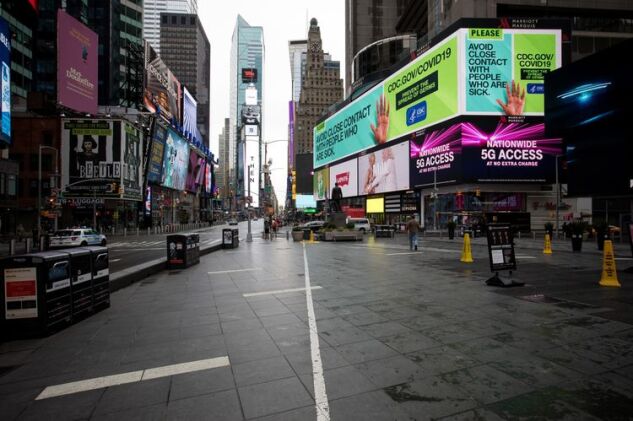 A CDC announcement notice is displayed in an empty Times Square in New York on March 19, 2020.
Photographer: Michael Nagle/Bloomberg

Moody’s Analytics is advising policy makers to expect no less than a 10% hit to their general fund budgets, with the actual losses likely being much larger for most states, said , the firm’s head of public sector research. That’s calculated off a baseline expectation that second quarter gross domestic product will decline 15% to 20% from a year earlier, “which is almost unprecedented,” he said.

The outbreak of the virus may mark a quick reversal in state finances, which had slowly improved after the recession. States had seen steep budget cuts after 2008 that caused them to cut services and funding for infrastructure and education. Many had started to rebuild with rainy day at a record high before the pandemic struck.

“We had big plans for next fiscal year because the economy was clipping on really well -- and then all of a sudden we are in a tail-spin headed right back to where we were before we righted the ship,” said , commissioner of administration in Louisiana, which relied on sales taxes for about 40% of revenue in its fiscal 2020 budget. 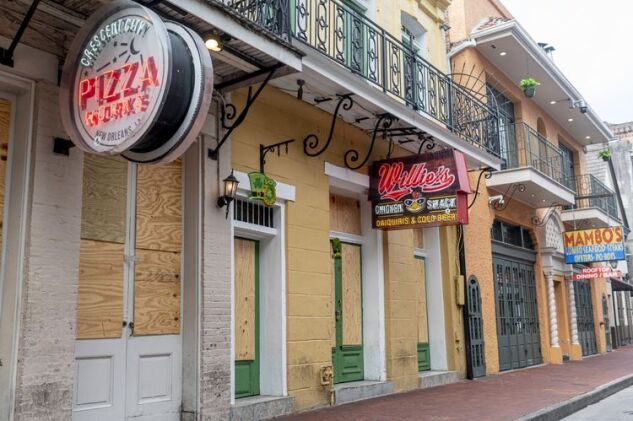 New Orleans’ outbreak of the virus has quieted the usually-bustling streets and led its annual Jazz & Heritage Festival, which attracts almost half a million people and their spending, to be rescheduled to the fall.

While the federal government’s $2.2 trillion economic stimulus package will reimburse states for some of the costs of responding to the coronavirus outbreak, it doesn’t address the revenue problem, according to Fitch Ratings. The funds, which states should receive within 30 days, are intended to be used for virus expense reimbursement, rather than “a pure cash flow injection,” according to Fitch.

And the unprecedented shutdowns in economic activity have made it difficult for revenue forecasters to predict what happens next -- which is important given this is the time when states put together budgets for the coming year.

The economic shock from the coronavirus is likely to lead to a “very deep decline” in GDP during the second and third quarters followed by an improvement, whereas the slump was spread out over about nine quarters during the Great Recession, Moody’s White said. He said some states may call special sessions to update the budget.

“They are scrambling,” White said. “Best case scenario, they are going to be very cautious.”

The drop in state revenue could easily exceed the 11% drop that states saw in a two-year period after the 2008 recession, said , director of state fiscal studies for the National Association of State Budget Officers. While rainy day funds and reserves are at a peak, he said that won’t be enough for some states to cover the deficits in revenue.

“All states are going to be feeling the effects of this downturn,” he said. Sigritz said he expects the pinch to be felt in usually-smaller revenue sources like gasoline taxes as people drive less and gaming taxes as casinos are shuttered.

New York is expected to see a loss of $10 billion to $15 billion in revenue in the fiscal year that starts April 1, according to the state budget office. Cuomo and lawmakers were the spending plan this week as the state’s number of virus-related cases keeps rising, reaching nearly on Tuesday — as do associated medical costs. In one week alone, New York spent more than $600 million on health care supplies, such as face masks, gloves, ventilators, and portable X-ray machines, according to the budget office. 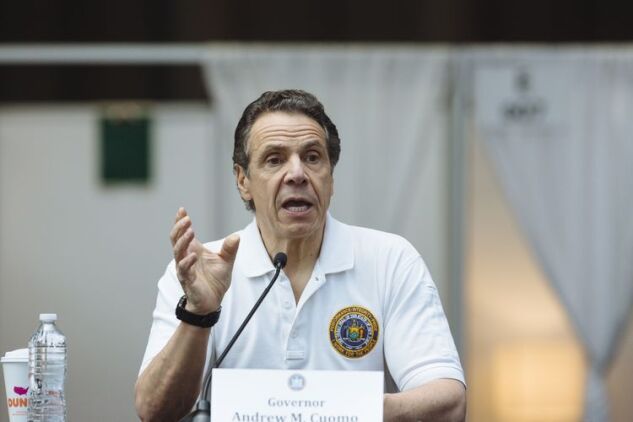 Cuomo said he’s not counting on federal funds to balance the budget, “especially when the political process is the process that’s supposed to deliver money.”

New York already was facing a projected $6 billion budget gap when Cuomo released his $178 billion spending proposal in January. Cuomo on finding $2.5 billion in health-care savings, as Medicaid shortfalls account for a large portion of the deficit.

Michigan expects that it could see $1 billion to $3 billion in lost revenue as a result of the virus. And Alaska is facing a one-two punch from lower oil prices and the virus. The Alaska Legislative Finance Division estimates that the drop in oil prices could drive a $400 million revenue reduction for the current fiscal year, according to analyst Alexei Painter. The lower oil prices, paired with less activity from tourism and fisheries, could help drive an $800 million revenue reduction in fiscal 2021, Painter said.

Other states, like Alabama, said it was too soon to say what impact the virus would have on revenues in the current and upcoming fiscal year.

“There is a lot of uncertainty,” said Josh Goodman, senior officer for the Pew Charitable Trusts who researches public finances. “States are just starting to get a handle on how bad it might be.”

At least 38 states and territories have issued some version of a stay-at-home order, shuttering parts of the economy as residents stay inside and restaurants and stores close. The result may be the steepest drop in sales taxes ever, according to the Institute on Taxation and Economic Policy, a left-leaning think tank. States like Florida, Texas and Washington are especially susceptible to the declines because the states derive over half of their revenue from sales and excise taxes, while the average is 35%, according to the group’s estimates included in a 2018 report.

The red ink also puts the municipal workforce at risk. During the last recession, states and local governments shed 110,000 jobs in a two-year period, according to a 2009 report by the Center for Economic and Policy Research, a think tank in Washington, D.C.

Ohio Governor , a Republican, earlier this month announced a freeze on hiring and pay increases, saying in a statement that revenues will go down “dramatically.” He asked state agencies to find ways to cut 20% in spending for the current and upcoming fiscal year. State lawmaker , a Democrat, said manufacturing jobs are at risk, which is especially important for the Midwestern state.

“The Covid-19 situation is affecting everyone financially,” he said. “The revenue streams are going to be depleted because people aren’t working or buying anything.”