‘s share of local taxes collected by its hometown from e-commerce sales reached new records last year in the midst of a recession, thanks to the boom in pandemic-induced online shopping.

Cupertino’s most recent payments to Apple—totaling $5.7 million for the second and third quarters of 2020—increase the total amount paid to the company to $80 million since the original deal was negotiated in 1997, when Apple was on the brink of bankruptcy.

The record haul shows how the sales-tax sharing agreements that Cupertino and a handful of other California cities struck with e-commerce giants before the pandemic are saving their finances while dozens of other cities are facing drops in tax revenue. , and benefit from similar agreements with other cities, though all those pacts were struck much more recently than Apple’s with Cupertino.

For Cupertino, the online spree drove sales tax revenue up by more than one third from April through September, reversing predictions in the spring that city revenue could drop by 18%. But the surge has renewed criticism that the deals benefit some cities to the detriment of others by siphoning away tax revenue that otherwise would be collected where the sale was generated. Although some cities require companies to add jobs and facilities as a condition of getting the payments, Apple’s doesn’t.

“This is a bookkeeping trick that is costing California taxpayers millions of dollars for literally no new jobs,” said Nathan Jensen, a professor at the University of Texas at Austin who focuses on economic development and subsidies. “Apple gets the majority of the benefits and a few locations come out ahead. A large number of communities will see sales tax declines.”

Apple said over the past five years it has contributed substantial amounts to support affordable housing, education and transportation improvements across the city.

“We feel a deep responsibility to give back to the community we call home and are proud to be the largest taxpayer in Cupertino,” the company said in a prepared statement. 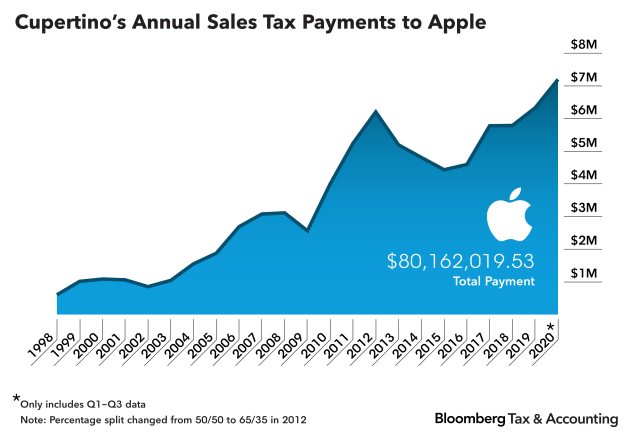 Cupertino’s deal treats all online purchases of Apple products in the state of California as if they were made in Cupertino, for purposes of collecting the 1% local portion of the state’s 7.25% state sales taxes. Cupertino then passes on 35% of what it collects from those purchases to Apple.

The arrangement applies to Apple’s online sales to consumers in California, sales to other businesses in California, sales at Apple’s two retail stores in Cupertino, and use tax on Apple’s own equipment purchases. The quarterly payments are approved by the Cupertino City Council, providing a window into the scale of the online shopping surge, though Apple’s actual California sales are confidential.

Bloomberg Tax in 2019 first reported Apple’s payments over the life of the agreement, and details of the arrangement, in one of several articles that prompted the California legislature to pass bills banning such agreements in the future and requiring more disclosures about them. The latter bill became law; the former was vetoed by Gov. Gavin Newsom (D).

Cupertino officials expect the pandemic surge to be a one-time experience, Finance Manager Zach Korach said.Although higher revenue that began in the spring is bleeding into the fall, a broad shift to working and learning from home that prompted the buying spree isn’t likely to happen again, he said.

Apple’s surge is consistent with online retail generally during the pandemic, according to state and national data. California’s online taxable sales more than tripled in the first half of 2020, Newsom’s Department of Finance said in a new state budget plan released Jan. 8. At the same time, taxable sales from clothing, electronics, and furniture from in-store purchases are below 2019 levels, according to tax department data.

Nationally, online purchases of consumer electronics increased more during the pandemic than overall online shopping, jumping from 43% of all purchases in 2019 to 56% in 2020, according to Sucharita Kodali, a retail analyst with Forrester Research Inc. Increases in online purchases of computer hardware and accessories also outpaced growth in online retail overall, she said. 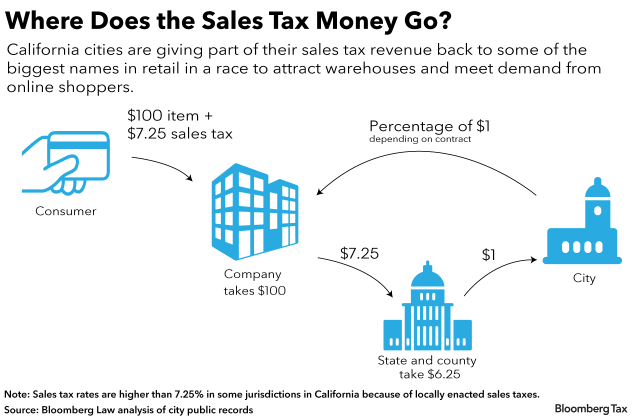 State law prevents the tax department from discussing revenue from Apple or other specific companies, Director Nicolas Maduros said. But the department watches for large shifts when companies file their quarterly sales and use tax returns, and may have more answers about the impact on local revenue after it analyzes more tax returns covering the months of the pandemic.

Cupertino’s revenue increase may be quantifiable but cities where the company’s 53 California retail stores are located don’t know how much revenue they’ve lost because their residents bought an Apple product online instead.

“It’s all apparent to our eye, but we need to get real facts about how few are gaining at the peril of the many,” said Sen. Steve Glazer (D), who authored the 2019 bill to ban the deals, which was vetoed by Newsom.

The California League of Cities opposes the agreements and is seeing the boom in e-commerce help some cities that have them, lobbyist Nicolas Romo said.