France will unveil “massive” support for this week and a new broad stimulus plan including tax cuts for companies at the end of August, Finance Minister said.

The measures will be in addition to emergency aid to protect jobs and companies during the lockdown and a series of support plans for sectors including tourism and auto and aircraft manufacturing.

“It can go very high,” Le Maire said, when asked on RTL radio if the stimulus plan would be between 50 billion euros ($57 billion) and 100 billion euros.

The French government is seeking a balance between rebooting a convalescent economy and not overburdening stretched public finances. Recent indicators show consumer spending may be recovering faster than expected from the coronovirus , while public debt is already forecast to rise to over 120% of economic output. 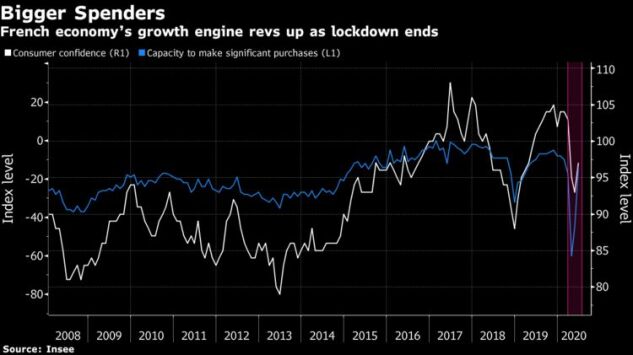 But the government has warned the outlook is poor for later this year, particularly in the labor market where it expects 800,000 job losses in 2020.

“The prime minister and president will this week announce a massive, immediate, and effective plan for youth employment,” Le Maire said Monday.

The broader stimulus plan late August will have a strategic objective of further boosting job creation and an ambition to accelerate the transition toward a low-emission economy, he said.

“When difficult times come, we’ll be glad to be able to present new support for businesses at the end of August to tell them we will cut your taxes to make you more competitive, we will invest in an ecological transition,” Le Maire said.

The French finance minister also repeated a pledge to not raise taxes between now and the end of President Emmanuel Macron’s mandate in 2022. He said there would be support for low income households, although no blanket measures to consumers, like cuts to sales tax.

To contact the reporter on this story:
in Paris at whorobin@bloomberg.net

To contact the editors responsible for this story:
at fobrien@bloomberg.net