Hi, this is Liam Denning with today’s edition of Elements, Bloomberg’s new energy and commodities newsletter. We bring you a daily mix of commentary from Bloomberg Opinion writers and the best of our market-leading news coverage. We hope you’re enjoying it, and if you haven’t yet signed up to get it direct into your inbox, you can do that here.

Whenever oil producers gush profits, some politician will . Besides the extra revenue, it helps portray high pump prices as a result of greed rather than plain old supply and demand. Now, with the Inflation Reduction Act’s passage this weekend by the U.S. Senate, one finally arrived. Sort of.

The IRA’s 1% levy on stock buybacks is, of course, not limited to oil majors. S&P 500 buybacks look set to top $1 trillion this year, with technology and financials dwarfing the energy sector, both in absolute dollars and share of payout yield. Of the top 25 buybacks in the first quarter, only one energy company, refiner Marathon Petroleum Corp., makes the list — at No. 23.

That understates the relevance of this new tax for the industry, however. For one thing, buybacks ramped up in the second quarter, as did targets. Marathon boosted its own payout to more than $3 billion. Exxon Mobil Corp., which regularly topped the rankings during the supercycle, practically doubled its own to almost $4 billion. For 2022 as a whole, buybacks for six large US energy companies — Chevron Corp., ConocoPhillips, Exxon, Marathon, Occidental Petroleum Corp. and Valero Energy Corp. — might total $55 billion, making up about 60% of their overall distributions.

That preponderance of buybacks versus dividends reflects a financial philosophy shaped by boom and bust. over capital expenditure, and inherent volatility — remember just two years ago? — demands caution when raising dividends. Buybacks offer a more flexible way of managing windfalls. Plus, of course, buybacks offer tax advantages over dividends.

A 1% levy isn’t going to upend that philosophy, and the fact it doesn’t kick in until 2023 may turbocharge buybacks over the next several months. It will add to energy companies’ frustrations, though. While the sector is forecast to generate 12% of second-quarter S&P 500 earnings, it languishes at just 4% of the index weight. That disparity may be a bat-signal for buybacks, but it also reflects stubbornly high capital costs that an extra layer of expense won’t help.

Chart of the Day 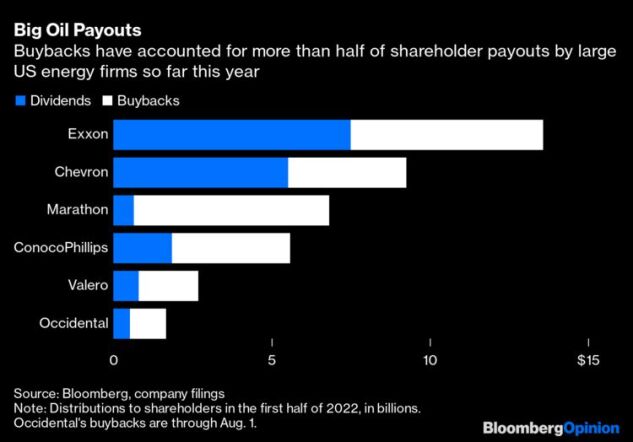 Record profits on the back of high oil prices and refining margins have translated into increased dividends and, especially, big buybacks from large US oil and gas companies. Annualizing dividends paid so far and factoring in announced buyback programs imply a 2022 payout yield for the six companies here of about 10%, with roughly 60% of that relating to buybacks.

The French nuclear regulator granted a temporary waiver for to discharge hot water into rivers, potentially breaching environmental standards, as the nation struggles with an energy crisis. The exceptions for Electricite de France SA bring some relief to a European market where prices hover near records.

Tesla Inc. reached with the Indonesian government to secure nickel supplies, a government minister tells CNBC. It marks the latest effort by the electric-car maker to secure its owns supplies of critical raw materials for batteries.

Shipping in the Taiwan Strait shows signs of , though China’s announcement of a new military exercise near the island signals that risks remain. More than 40 vessels have transited through a drill zone since Saturday, maintaining a key route for supply chains and commodities.

BHP Group is back in the major M&A game as it tries to meet the demand for metals by the electric-vehicle and clean-energy industries. The miner’s for OZ Minerals Ltd. marks a return to multibillion-dollar offers after years of smaller moves.

More Asian governments are putting prices on emissions to curb global warming, but the region’s are mostly off to slow and disappointing starts.

Best of the Rest

Will lithium follow oil down the path of resource nationalism? This panel discussion by Phenomenal World focuses on South America in the wake of a string of election victories by leftist parties.

Even if politicians often regard a carbon tax with horror, economists prize it for its efficiency versus tax credits or mandates like clean-energy standards. But does that view hold up? Not necessarily in the power sector, according to a new study from UC Berkeley’s Energy Institute at Haas.

An op-ed in the Globe and Mail ponders whether Canada can help out its large and unpredictable neighbor to the south with supplies of a vital commodity facing shortages: water.

Is it the end of the world as we know it? Geopolitical analyst and author Peter Zeihan believes so. He debates war, economics, demographics and more alongside Eurasia Group’s Ian Bremmer in a recent podcast hosted by Sam Harris.

To contact the author of this story:
Liam Denning at ldenning1@bloomberg.net

To contact the editor responsible for this story:
Michael Tighe at mtighe4@bloomberg.net